Those magnificent men in their flying machines

Along with many of my friends who belong to the same club, I've spent the last week tussling with a cryptic quiz on the theme of "Planes, Trains and Automobiles" and it seems to have crept over into my crafting! 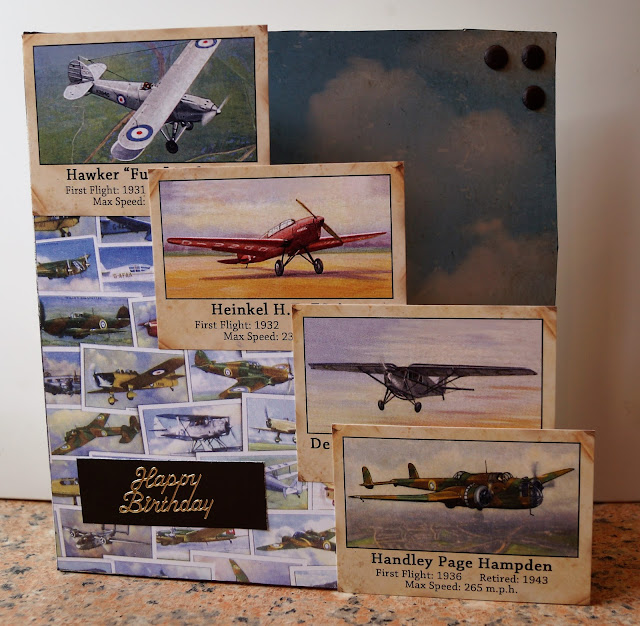 I took a large 8" x 8" card and cut the front along the diagonal. Then, using papers and toppers from the Hunkydory "Planes, Trains and Automobiles" set, I covered the inside of the card with sky paper and the outside with collage paper. Then I arranged toppers along the diagonal and finished with a peel-off sentiment.

This month's Twofer Card Challenge theme is Butterflies - one of my favourite themes, almost up there with dragonflies!

I chose this butterfly stamp which was part of a magazine freebie set several years ago. 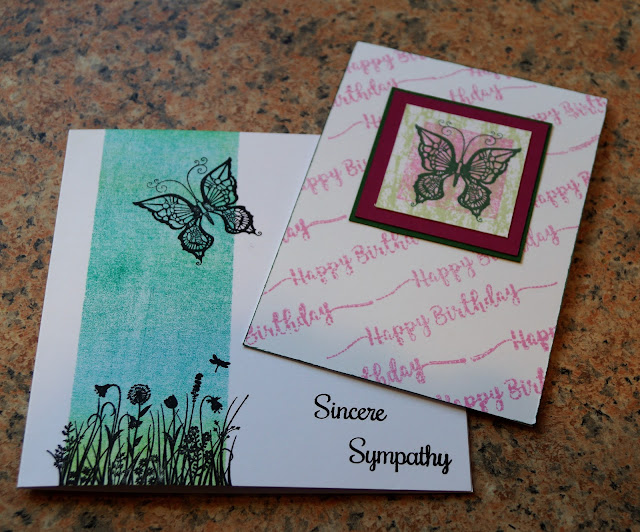 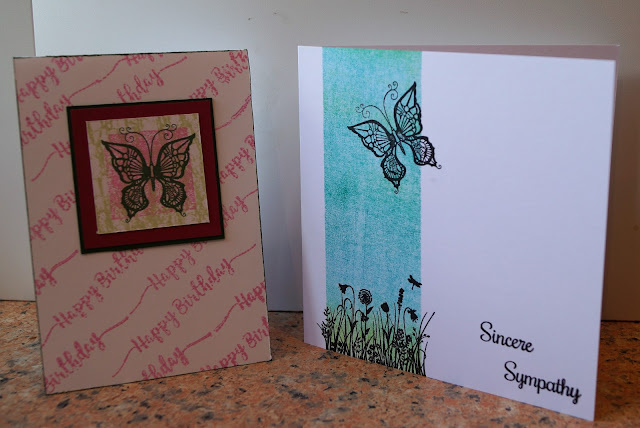 I am sharing the pair at Twofers 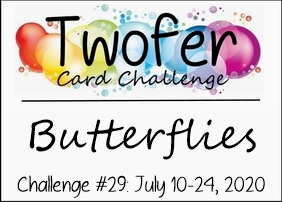 and also at Allsorts where the theme is something beginning with B. Between the two I've got butterflies, birthdays and blue - lots of Bs!

Now a closer look at the individual cards. 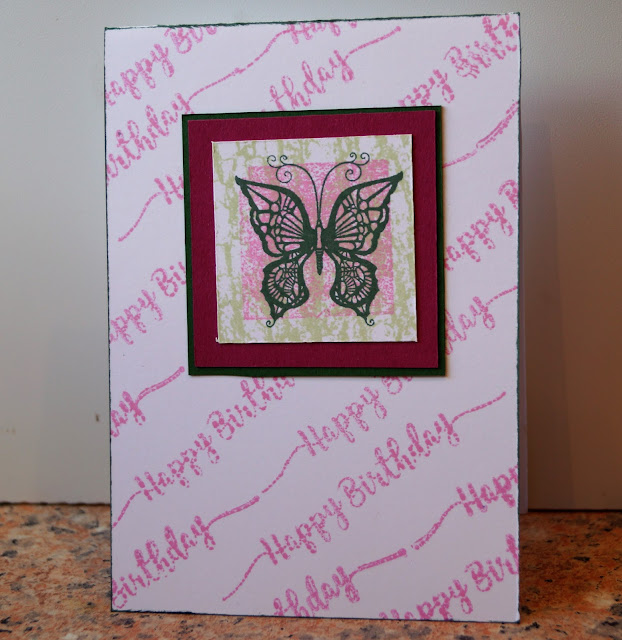 I went pretty old-school on this  - matting and layering over a stamped background. I was going to use my Misti to line up the rows of stamping but it looked a bit odd with the sentiments lined up one above the other, so I stamped it by hand to make it easier to offset them.

For the topper, I stamped a bark-effect stamp  over the square in light green, then inked the surface of my smallest square acrylic block with dark pink and pressed it over the  background, then finally stamped the butterfly in a darker green, added dark pink and green matting and finally ran the dark green inkpad around the edge of the card.

I am sharing this with Watercooler Wednesday - all about occasions 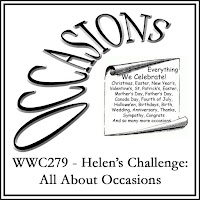 I often use butterflies on sympathy cards, so I decided my twofer should be a syampathy card. I went for a very CAS one layer card. 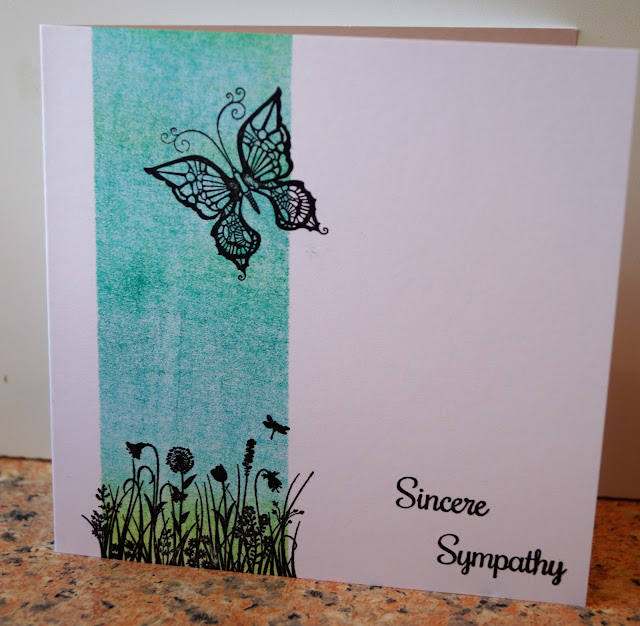 I simply masked the card to leave a band just narrower than the flower silhouette (from the same stamp set as the butterfly)  and used a brayer to lightly apply the ink from a Kaleidacolor pad.  Then I removed the masking and used Versafine ink for all the stamping. Job done! It only took a few minutes, something I think can be important with sympathy cards as unfortunately there are times when we need them at very short notice.

I am sharing this with AAA Cards - Made in Minutes 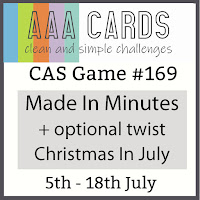 The girl in the window

Usually when I make an NBUS (Never Before Used Schtuff, (c) Darnell)  card I use very old NBUS, but  over the last few days I've acquired some  lovely new toys to play with so today I'm using NEW NBUS. 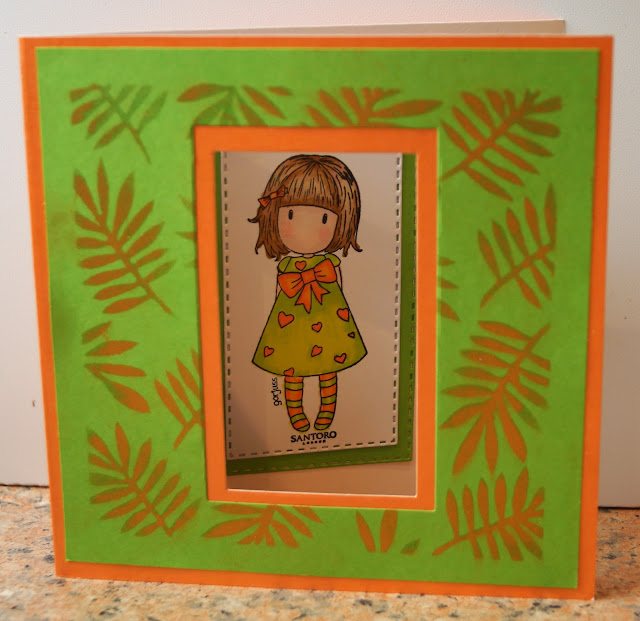 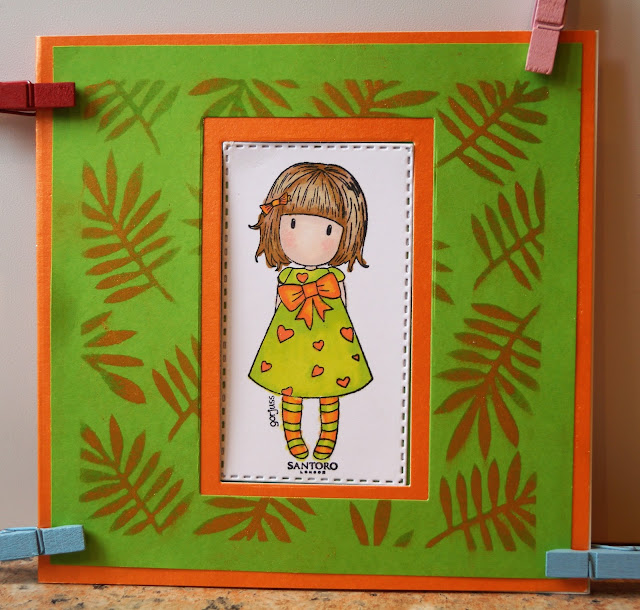 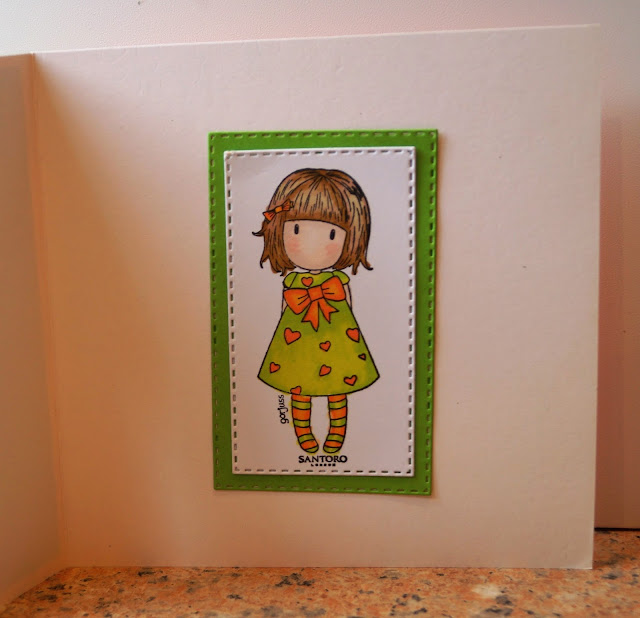 The NBUS items are the Santoro Gorjuss girl stamp, part of a beautiful bundle of goodies I won on the docrafts Facebook page, and the pretty leaf stencil which I bought this week.

I made a square card from single sided orange pearlescent card, and cut a slightly smaller piece of green for the topper.

Next I stamped the girl on a scrap of white card, coloured her with Promarkers and chose a rectangular nesting die to cut her out. Look, look.... I coloured HAIR!!!! Go me!

I stuck the image onto the green "waste" die cut, then put adhesive on the back of the panel, lined it up exactly behind the aperture on the orange card and closed the card. This made sure the image was correctly aligned with the window.

Now moving on to the green square, I taped the stencil over it, making use to leave an even border all the way round, and sponged Versamark ink through the stencil. Then I removed the stencil and brushed Blonde Moments Pearl Pigment Powder (do they still make that? It goes a long way, I must have had mine for about 10 years and I still have most of the pot) in gold over the leaves. I finished by buffing with a tissue to remove the excess powder  then stuck the green card to the front of the orange to form a wide border around the aperture.

Passion for Promarkers - Use Orange

Happy birthday Emma! Today is my daughter's birthday and it's become something of a family tradition that I send her a sunflower themed card every year. After all, her birthday is at the height of sunflower season - we have some beautiful ones in the garden right now. 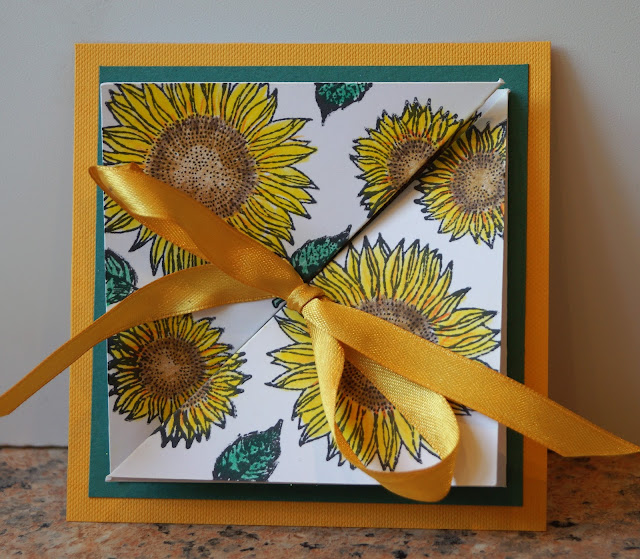 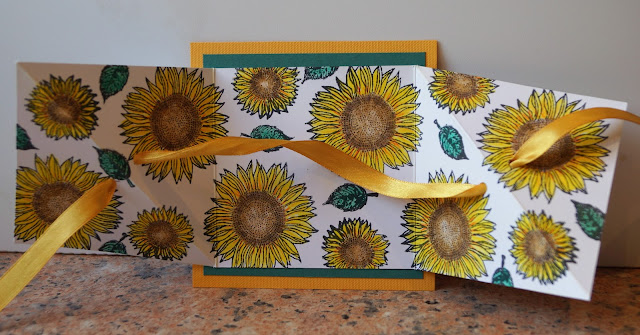 This year I decided to use  the twist card technique which I described in detail on my recent snowflake card. The sunflowers and leaves are stamped using a Creative Stamping from a year or so back and I've coloured them with pencils.

A Place to Start - Flowers

And while I had my Christmas stash scattered all over the table, I really had to make a second card. Once I'd remembered my pack of Santa Hat brads I simply had no choice. 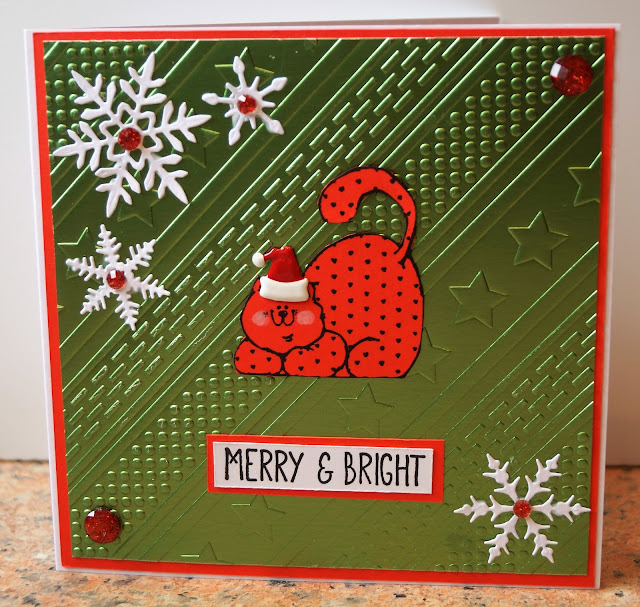 The background is made  using a stars and stripes embossing folder on satin finished metallic card. The cat is stamped using a very, VERY old unmounted stamp that I got in a grab bag over 20 years ago. (I have no idea now where that bag came from, I ordered from a small ad in the back of Crafts Beautiful, but many of the stamps from it are among my all time favourites and are still in regular use). I thought it was the purr-fect size for the Santa hat brad!

Finished with a stamped sentiment, some die cut snowflakes and lots of bling  to brighten up this gloomy day. 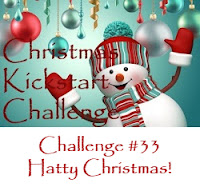 Show us your pussycats - Furrything goes

Make my Monday - Stars and or stripes

Jingle Belles - Stars and or stripes 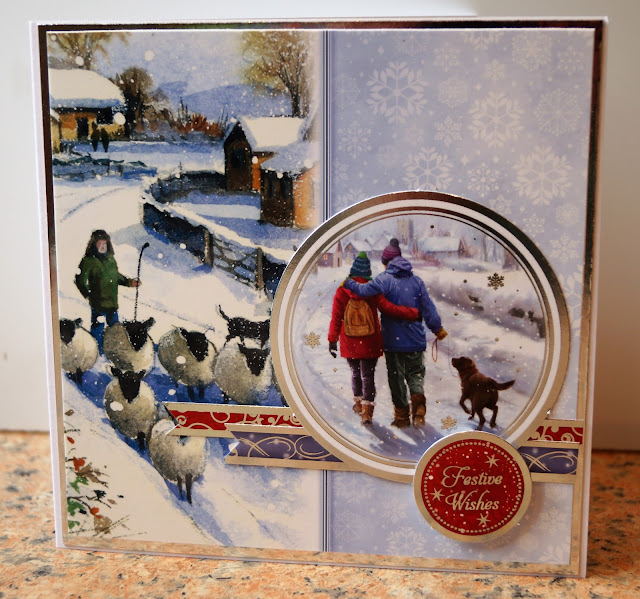 I dug out a Hunkydory collection from a couple of years ago and used elements from it to make this card,  using the sketch from 52 CCT. 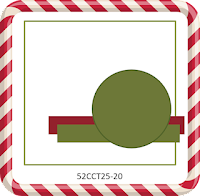 Shopping Our Stash - Hannukah/Christmas in July

Christmas Crafts All Year Round - Cool it!

I'm back with my second offering for the Butterfly challenge and this time I've included the accordion fold. 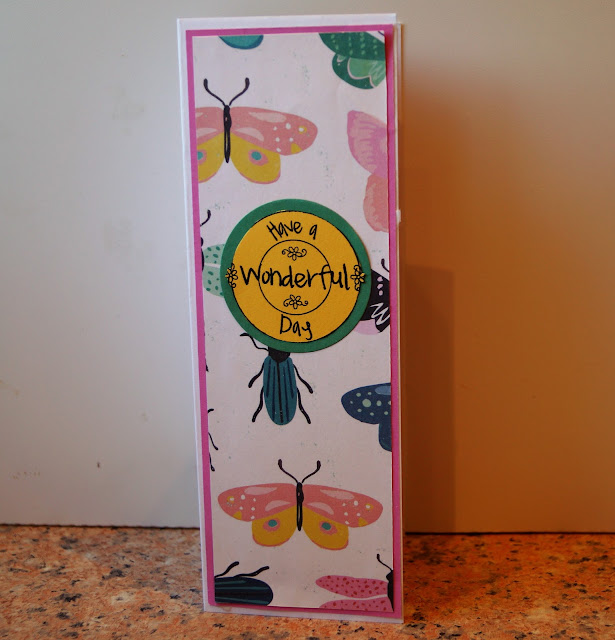 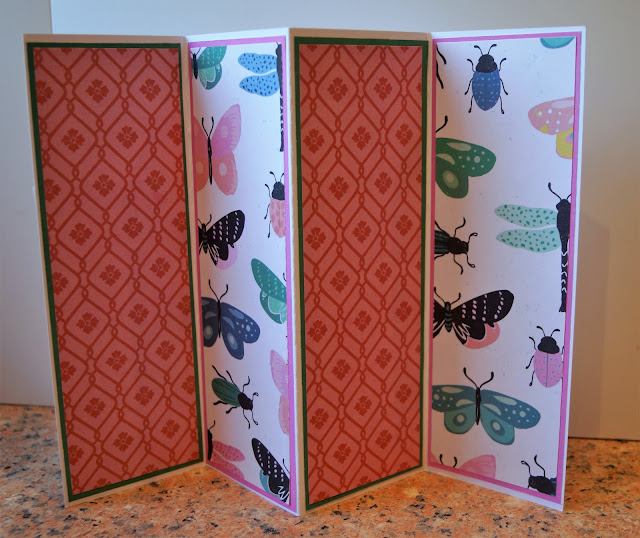 I used  the "A4 accordion" groove on the scoring board to fold my card into 4 equal panels then decorated the front and the inside panels with these papers which were a recent magazine freebie -  lots of lovely butterflies and bugs and the perfect colours for the challenge! I finished the front with an ancient and much-used Polkadoodles circular sentiment stamp.

It's just dawned on me that each panel of this card is the perfect size for a bookmark - wouldn't it be nice to use the perforating wheel on a paper trimmer to score the lines so the recipient could use at least one panel of the card as a bookmark? I might give that idea a try.

I am, of course, sharing this with the Butterfly Challenge where I'm claiming all elements - the fold, the two patterned papers and all three colours.

I am also sharing with Crafty Hazelnut's Patterned Paper Challenge for July.