A few days ago I was lucky enough to win a box of Greek foods from a competition on Facebook. Here's what arrived 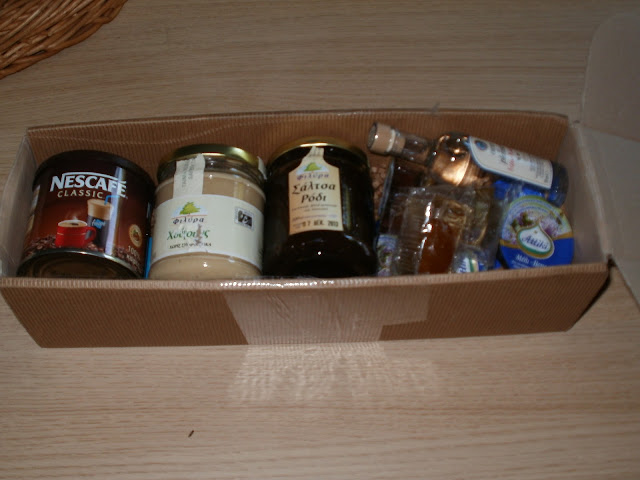 As you can see, there are some individual pots of honey, a miniature of Ouzo, some preserved fruit, a tin of Nescafé (!) and two mystery jars, with all the nooks and crannies in between crammed with sweets and chocolates.

But what was in the mystery jars? There was no English writing on them and the only Greek characters I know are from my science degree days, and since I wasn't planning to measure the wavelength of the light they reflected or their refractive index, I was stuck.

First I tasted the lighter one - definitely a sesame taste, but not strong enough for it to be pure tahini. Then the darker one - deep, rich  and savoury with a strong vinegar note. Perhaps a chutney or barbecue sauce?

Then my daughter had a bright idea. We used the extended character set on the computer to type the words from the label, then copied and pasted them into Google and used the translate function. The front label of the lighter jar was damaged, so we worked on the ingredients. The top ingredient turned out to be chickpeas, with olive oil, sesame and lemon  juice making up most of the rest - it's a jar of hummus. 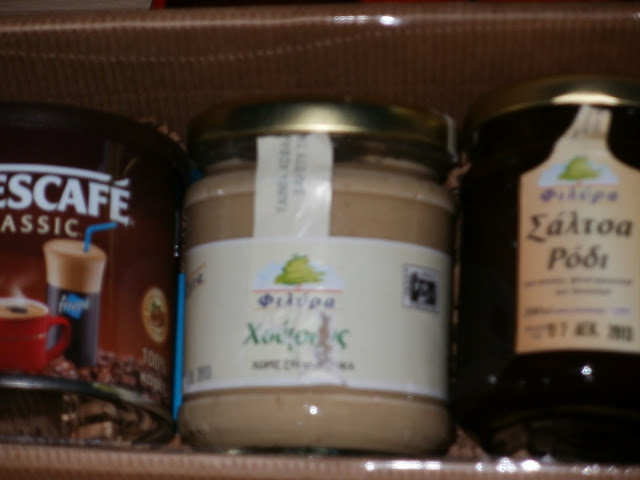 Next  the darker jar. We managed to translate the name of this - it is Pomegranate Sauce. But I have no idea  how it is meant to be used. I've tried searching for it online, but almost all the results I have found are either for a sweet sauce, or for a sauce made by incorporating fresh pomegranate while cooking. I've found the exact product here which lists the ingredients as pomegranate syrup, petimezi, red wine, onions, cedar seeds and extra virgin olive oil and suggests it can  be used to marinate game and poultry.  Has anyone ever tried it?  Can anyone suggest any recipes? And does anyone know what petimezi is? 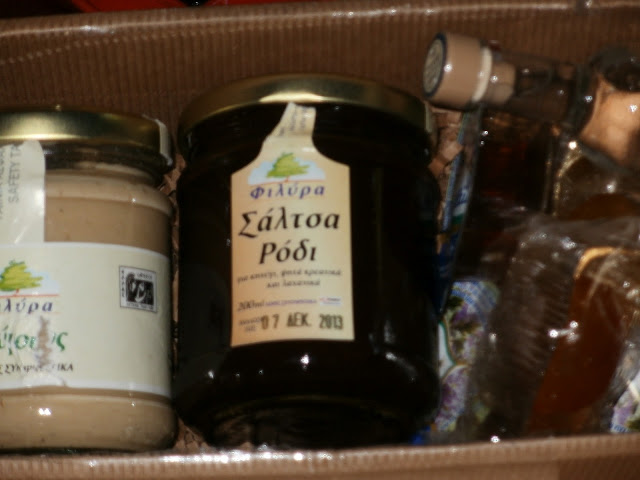 And finally, the Nescafé. My only question about that is - what's it doing there???? 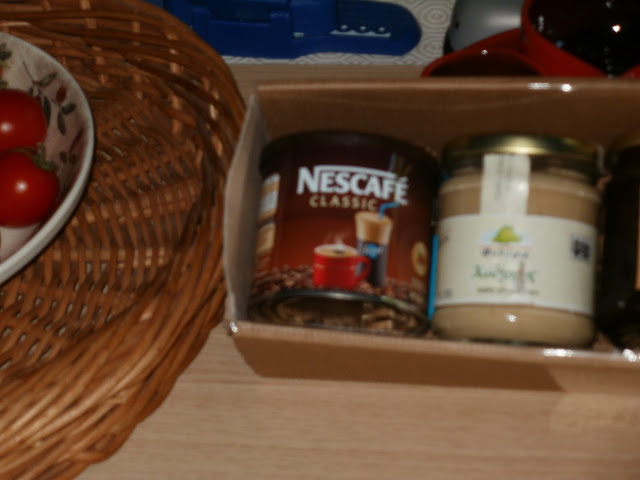 I have pomegranate molasses in the fridge...not sure if it's the same stuff. I use it to make Sabrina's fabulous recipe, which is Persian and very very rich. Or try Dirty Kitchen Secrets, Bethady's blog, I think she has some recipes too.

Pomegranate molasses, that's what I think it is as well, is lovely as a sweetener, but not too sweet. I had some at some point, wonder what happened to it?

As for the nescafe, it's because it's to make a Greek style frappe, with cold milk & lots of ice cubes.

Thanks for the tips. This really wouldn't make a sweetener, it is very sour and sharp, and it is so strong that 300ml of it would overwhelm a dish, so I don't think it is the syrup referred to in the recipe, Fiona, which incidentally looks delicious. But maybe it's a concentrated version of that. It certainly looks like the kind of dish it would be right at home in!

I had no idea about the frappe, not being a coffee drinker I've probably never noticed it.