NOT a Christmas card

Is anyone else getting a bit tired of making Christmas cards yet? I've got one or two more to share with you before the big day, but I think I've now finished making them at last - although thanks to being  on the Sparkles Christmas DT I'll be making them again before the dust has settled on the tinsel! And in 2016 I promise I absolutely WILL make two cards or tags to go into my Christmas box every week, so there'll be no last minute rush to make me tired of them.  Well, that's what I say every year, one year I might actually listen to myself!

Anyway, it was such a nice change to be making something un-Christrmassy  that by my standards I went way over the top..... CAS this is most definitely NOT. Is it vintage, or distressed, or shabby chic? Or perhaps a bit of all three - I'm never quite sure where the dividing lines between the three lie. I suppose they overlap a lot. If I was really clever at graphics, I would now insert a Venn diagram with three overlapping circles to represent the styles, and this one would lie in the bit where all three overlap.

The images I have used are from a download I won at Suzy Bee's Blooming Challenge and the papers and embellishments are all from the Dovecraft Curiosity Corner range, with the exception of the die cut heart which was cut using a magazine freebie. 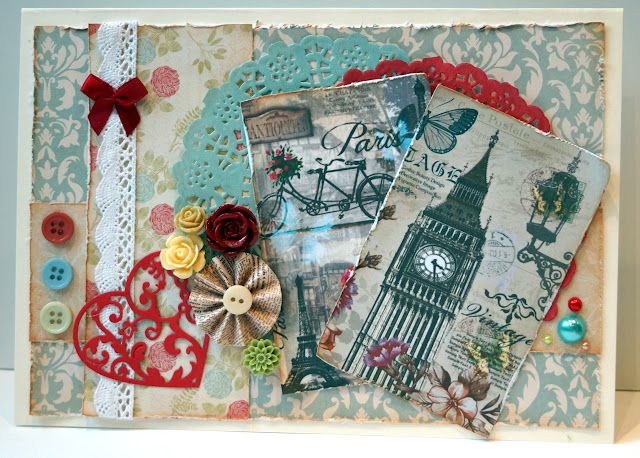 I am playing along with

Alphabet Challenge blog - V is for Vintage
Suzy Bee's Blooming Challenge - add buttons or a button
Mod Squad - Anything but a Christmas card
Posted by Jane Willis at 11:55

I think it is all 3. Looks like you had so much making this card. I love all the elements, my eye just goes from one thing to the next! Sweet buttons, bows and lace. And of course that beautiful red heart! Great take on the challenge, thank you so much for participating this week at the Mod Squad Challenge

So pretty!!! Thanks so much for participating in our ALPHABET challenge!!! Can’t wait to see you participate again in our next challenge!!
Deanne at A Little Bit O’ Paper