This week's challenge at CD Sundays is "Quite Simply - Hats"

Well, I didn't have anything with JUST hats on it, but I have a CD called "Victorian Ladies" - which I won in a blog challenge, I think it was on the CD Sundays blog - where hats are a major feature of the outfits in several of the images. The CD doesn't have a brand name, but the copyright belongs to a company called JVA which I'm not familiar with. The combination of images and backgrounds is rather "Joanna Sheen-ish" so I decided to do something "rather Joanna Sheen-ish" with the image. But instead of using the whole design for decoupage, I used just the hat, inorder to emphasise  it. 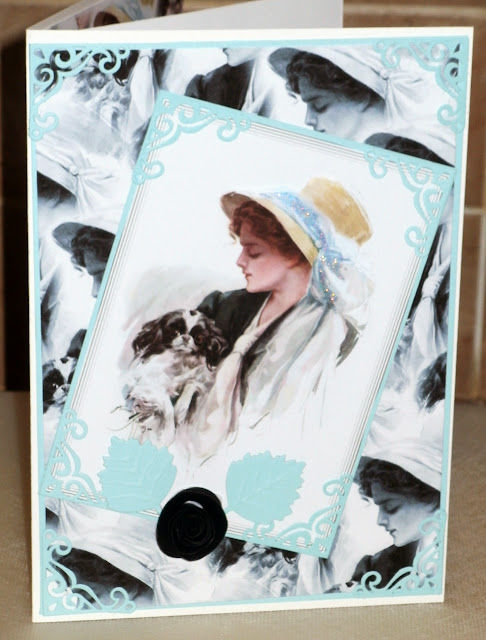 Incidentally that's my first-ever coiled paper rose, and it will probably be my last! I half-cheated and used a sheet of die cuts I bought in a sale, and had to turn the house upside down looking for my quilling tool, which I'd last seen when I lent it to my daughter almost 20 years ago. Luckily half her craft stuff is still here waiting for her to make space for it, but it's so long since I used it I was all fingers and thumbs, and as  you can see I got glue everywhere. It's the kind that dries clear, but I was too impatient to take the photo so the rose has a big white blob in it!
Posted by Jane Willis at 12:44

A beautiful card Jane. Such a lovely image and gentle colours.Thanks for joining us this week at CD Sunday. Tess (GD). x

A lovely card Jane, I love the image and your colours. Thanks for joining us this week and good luck in the draw.
Christine xx
CD Sunday DT

It's lovely Jane. A beautiful image (love the dog as much as the hat) and a great design.
Thank you for joining in.
Beryl xx
CD Sunday Dt

I think this is a lovely card Jane and I love the blue mats and corners which compliment the image perfectly.
Jocelyn x
CD Sunday DT

A beautiful card Jane and a beautiful rose (you can get die cuts for these). I love how the blue card matches the blue of the bow on the hat. Thanks for joining in at CD Sunday this week.

Another lovely card, love the image.
Thanks for sharing with us at CD Sunday this week.
Jenny x
CD Sunday DT

A lovely card Jane, great colours, thanks for sharing at CD Sunday x