I've had a pack of butterfly shaped cards in my stash for years. They seemed like a good idea at the time..... but I've never been able to think of anything to do with them. So when I read that this week's Less is More challenge is a one layer card that hadn't to be square or rectangular, I thought they would be perfect.

But I still couldn't think of anything to do! Eventually I decided to stamp one with spots  of different shapes and styles. To avoid placing errors, I used acrylic stamps, placing them face down on the card, and moved them around until they were where I wanted, then put the stamping block down over the whole arrangement to pick them up in situ. 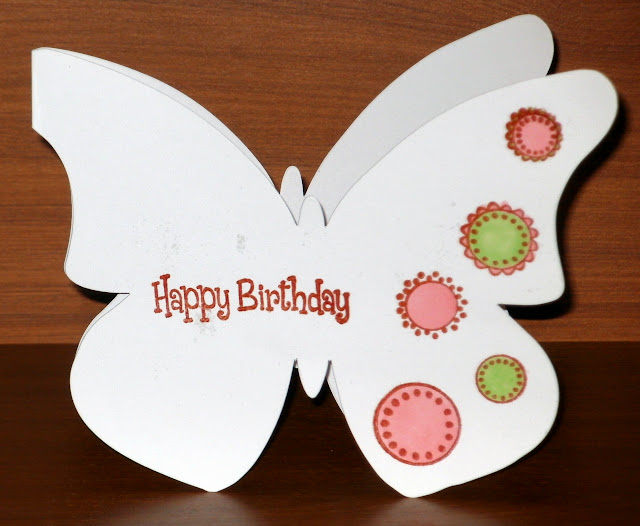 The result - well, as so often happens when I make a one layer card, it leaves me with a feeling that is isn't quite there. Raising the centres of the spots or inking the edges of the card might help, but then it would be neither one layer nor CAS. I think I've learned a lot in the last year or so, since I started joining in these challenges, but I still have a long way to go!

I'm submitting this to

Addicted to Stamps and More  53 - colours

and as everything I used was at least a year old, and the card MUCH older than that, Use it Tuesdays 59 - Birthdays

What a fun shaped card! Love your pretty spots (that is definitely an advantage of clear stamps isn't it). Thanks for joining us this week at ATS&M.

This is a great shaped card Jane...it looks terrific!
Thanks so much
Chrissie
Less is More

It's lovely Jane, I have some cards like this and struggle too,seem good buys at the time! Thanks for your lovely comment.
Lynn x

Hi Jane. Love your butterfly card. Your stamping looks great and works very well with the butterfly shape. Thanks for joining the fun at ATSM. Good Luck! Monika

The shape of the card is wonderful! What an awesome thing to find in your stash. You have done the CAS 'thing' very well and I love how you used our colours on this beautiful butterfly. Thanks so much for playing along at ATSM xx

Fun shaped card!! So cute!! Thank you so much for joining us at ATSM. Good luck.. :)

Awesome job with the challenge, thanks for joining us at Twisted Tuesday!
http://useyourwordchallengeblog.blogspot.com/

great card
Sorry for my late visit.
Thanks for joining us this week x
Jen
"Less Is More"