This week's theme at CD Sundays is The Year of the Horse - either a Horse design, or an Oriental one, or both. I've got remarkably little on CD that's Oriental themed - probably because I have so many Oriental papers, stamps and embellishments that my subconscious has banned me from buying any.

So I had to approach it from the horse-angle. I really wanted to use the gorgeous horse designs on "Meadow's Edge, the Next Generation" but although I've only used the CD a couple of times, it won't open on my computer any more. It just makes the drive whirr loudly in a rather alarming way for several minutes then falls asleep. I can use Windows Explorer to view the folders on the disc but it takes about 10 minutes to bring up the menu. I suppose I could then open the image folder and view the files that way, but if it's going to take 10 minutes to open each one it will be NEXT Sunday before I get any images to print! I tried it in my husband's laptop, where it still won't auto run but the files open much faster,  but his laptop won't speak to my printer! Has anyone ever encountered a similar problem with a CD, and if so, is there a fix for it?

Anyway, abandoning that idea, I turned to the beautiful Joanna Sheen CD "The Country Diary of an Edwardian Lady" and used the pale, wintery horse decoupage and ploughed field backing paper from that. I love this design, it reminds me of my childhood, when the field behind our house was still ploughed by horses,  two beautiful beasts called Kit and Captain. I was pleased to find that my stash contained some card in the pale terracotta and blue-grey used in the image, which I used for layering and for die-cutting the flowers and leaves. 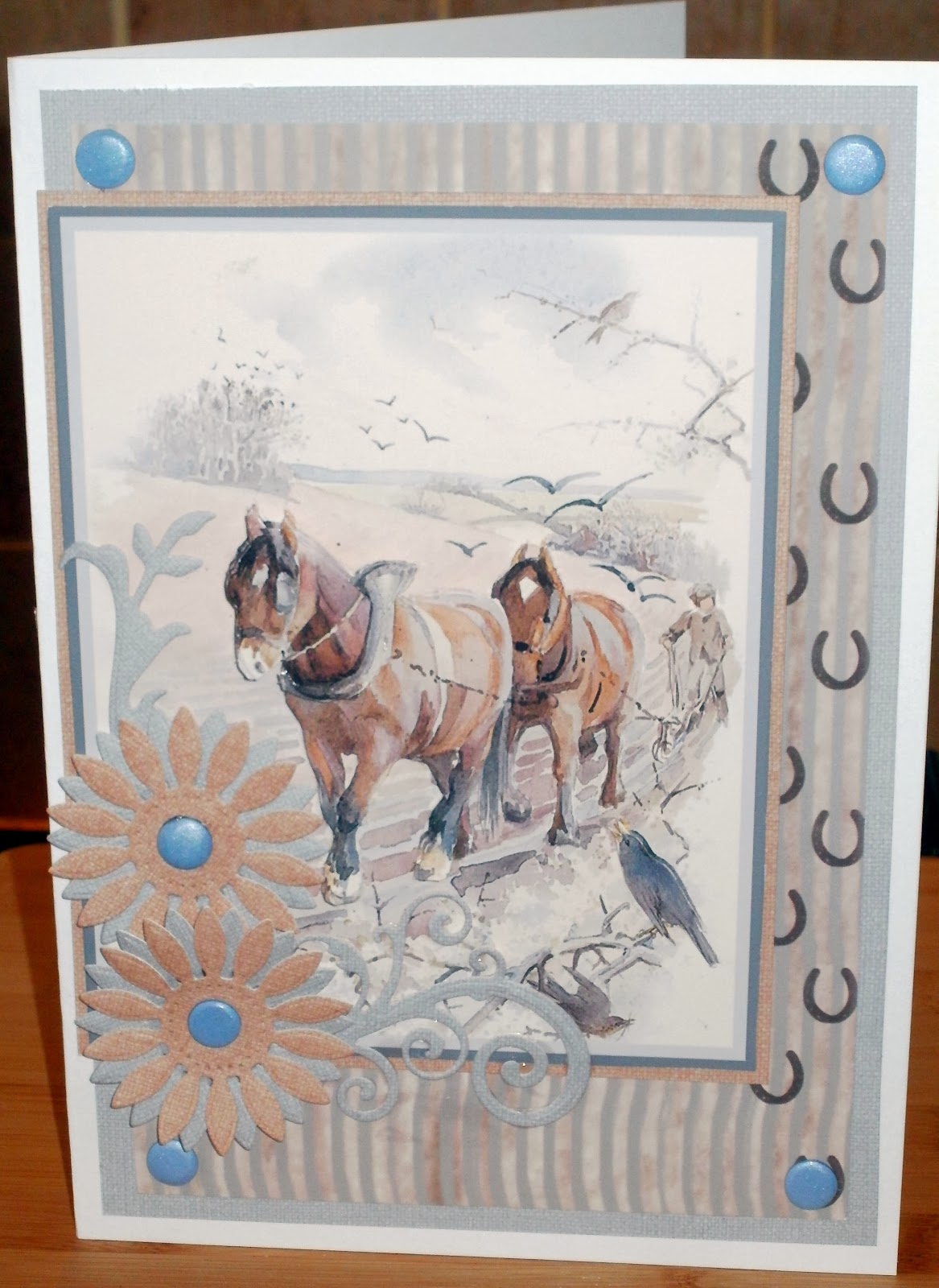 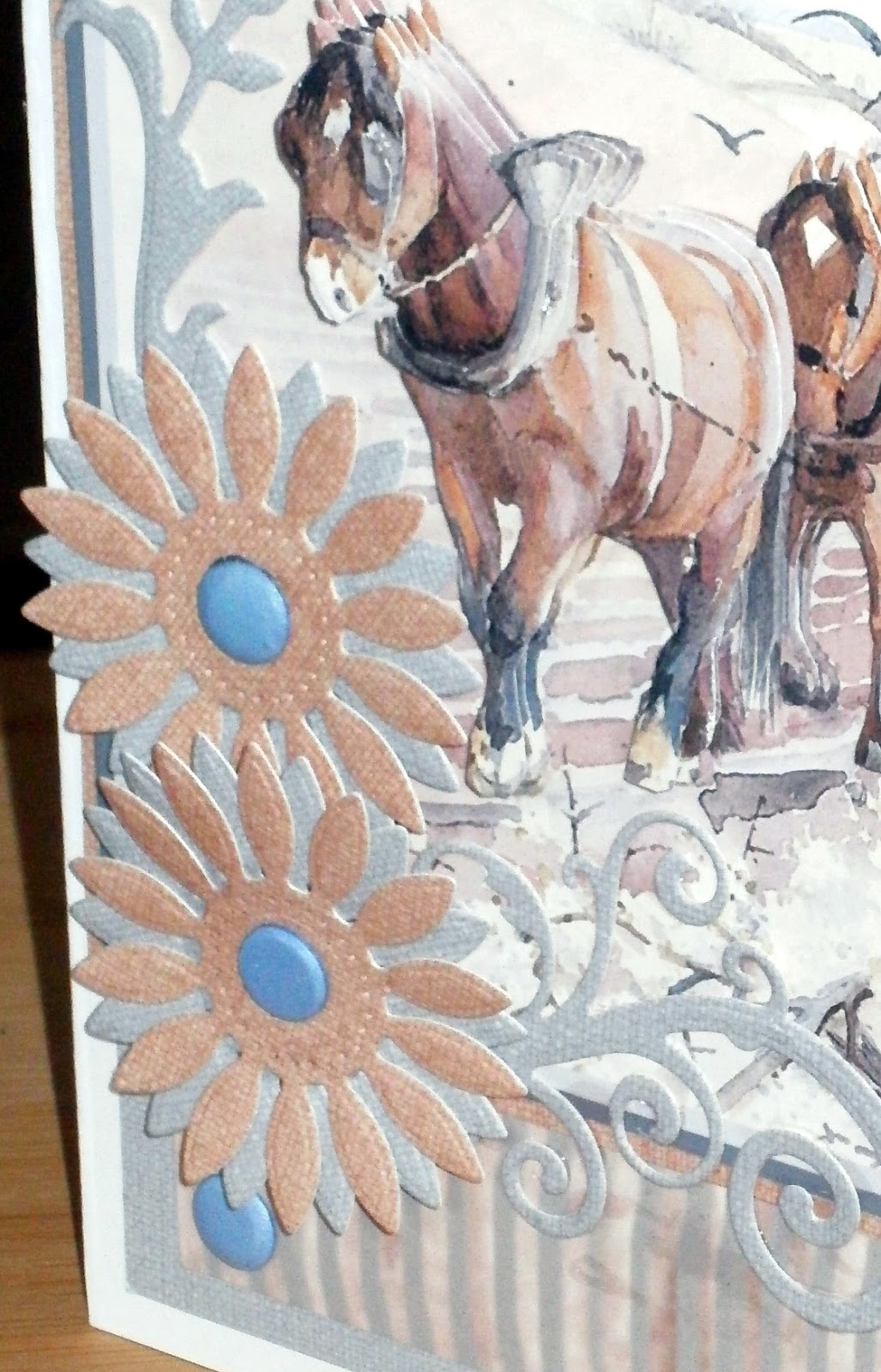 This is a lovely layout and all your embellishments match perfectly.
Not sure I can help with your problem except could you not download it to your PC and use it that way.
Thank you for joining us at CD SUNDAY this week. Hugs Wynn xx DT

Hi Jane. Love your Horse play. I don't know what to suggest about the CD.I do not know the particular Cd you have used and I am not casting aspersions (sounds like The Goons) but is it a professionally made CD - or it may simply have warped or become damaged.
Thank you for joining in with our Challenge.
Carol xx
CD Sunday DT Team B

That's a beautiful image. What a pity we don't see that sort of scene much any more. Love the colours.
Jocelyn x
CD Sunday DT

A stunning card, I love the subtle colours, i do like the touch of the horseshoes up one side too. Thanks for being with us at CD Sunday Challenges. Caz

A beautiful card Jane, I love the softness of it. Thanks for joining us at CD Sunday this week.

I do love this card, so beautifully constructed, thanks for joining us at CD Sunday.
sue-b DT x

Super card, thanks for sharing it with us at CD Sunday.
Jenny
CD Sunday DT

This is such a super card. Lovely image and so soft colours. I had a similar problem with my Ivory Cats CD - it crashed my computer and left a virus. All cleared now but the CD is useless. Your card would be perfect for the Cardz 4 Guyz challenge this week too x

A beautiful card - the colours are so lovely made even more so by your matching embellishments. x