I've had a lovely afternoon playing! What started out just as my entry into this week's Pixie's Snippets Playground has turned out to also be my latest Design Team post for Foilplay where you can buy the Tonertex pen and foils that I used in this card.

A rummage through my snippets box yielded several interesting bits in browney-creamy colours,  including the mottled cream and brown card I've used as a background. This was from a pack I bought at The Eden Project several years ago and fascinates me as the brown swirls have been made by actually embedding fine coffee grounds into the card.

The sort of distressed gold metallic card is from a kit I bought many years ago from QVC - many thousands of us bought it and then couldn't think of a thing to do with it once we got it home! And I still have a few snippets of the gorgeous patterned metallic cards that were the part of the kit that drew me to it in the first place. 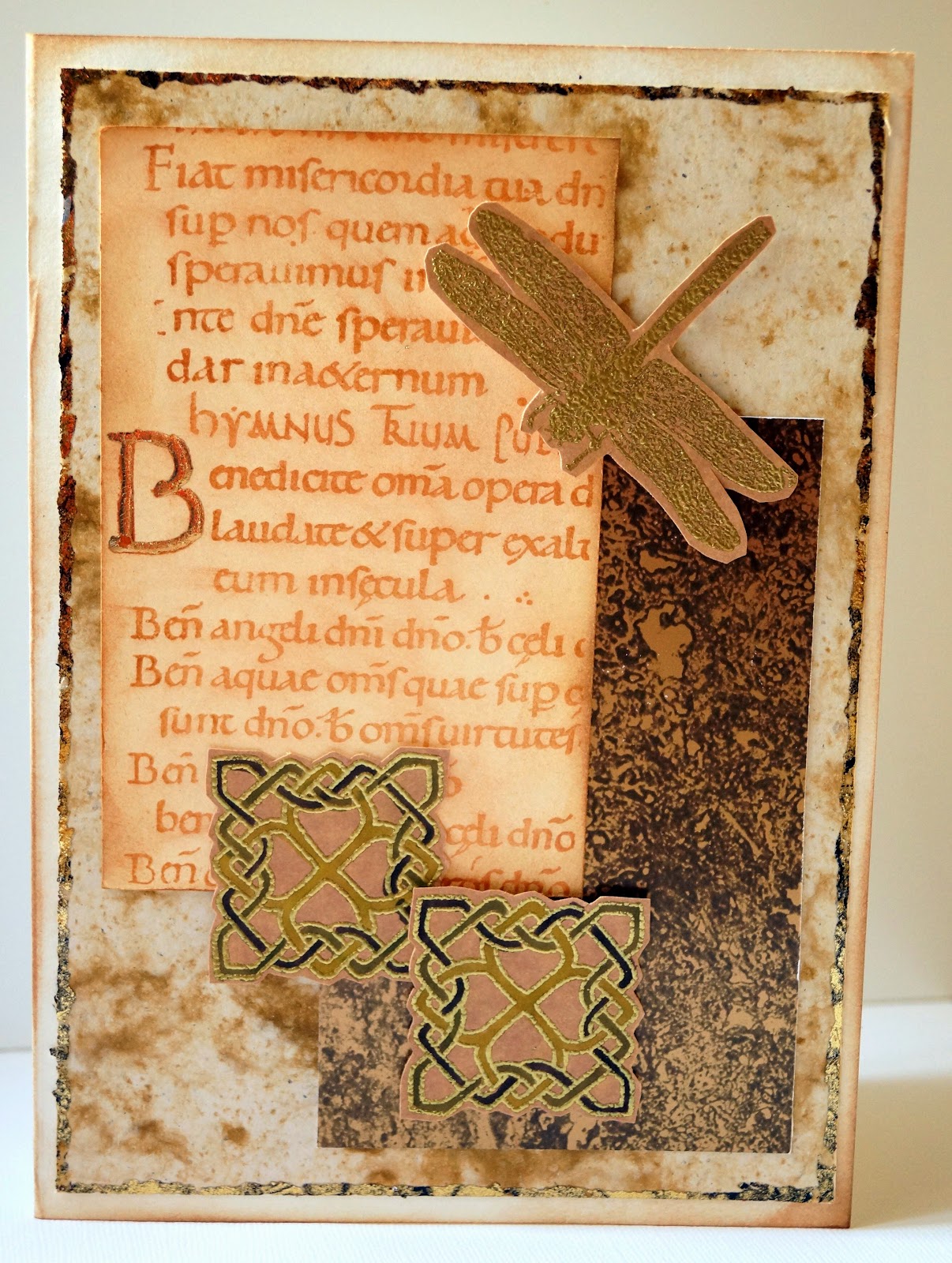 I stamped the dragonfly (stamp origins lost in the mists of time) and Celtic knot (Clarity stamps) on a snippet of pinkish-brown card and embossed them, then coloured in the knot with markers in three shades of brown.

The antique text - again, I can't remember where the stamp came from - I stamped onto cream card using Versamark ink. I then brushed gold and copper pigment powders over the stamping, rubbing them in well with a tissue and blowing off the excess, and fixed it with a tiny spritz of water. I aged the edges slightly with Tea Dye distress ink.

Now the fun bit. I used a Tonertex pen to go over the large letter B on the manuscript, and also to go around the backing card, using a rather haphazard scribbly movement to give the line a slightly "torn" look to it. When the pen had dried to a clear, tacky texture, I foiled the B in gold and the edges of the card using a "distressed gold" foil very similar in appearance to the scrap of metallic card. The photo doesn't really do the foiling justice - Hang on, I'll try a different shot......

... right, I'm back! Not such a good photo of the card this time, as I had to get into a rather awkward position in order to get light reflecting off the foil, but it does give you an impression of the wonderful rich shine! 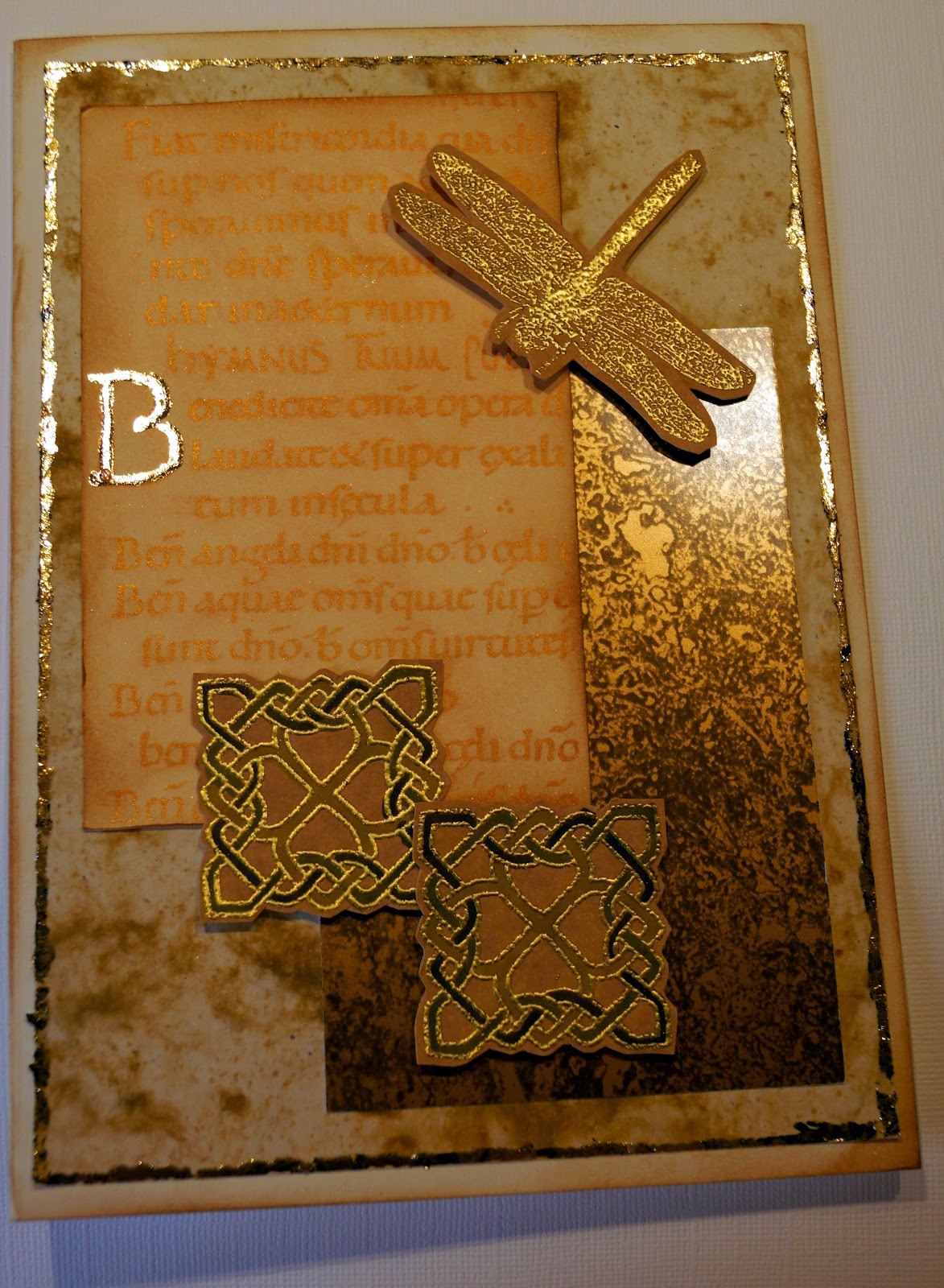 So there you are, I've had a lovely afternoon playing around, rediscovered some long lost friends in my snippets box, used lots of different techniques and thoroughly enjoyed myself.... isn't crafting wonderful?
Posted by Jane Willis at 16:30

Crafting certainly is a wonderful thing and what a wonderful card you have produced, Jane - it really is a beautiful work of art, thank you! Love your bits from your snippets box too - shows that it is well worth keeping one. I must sort mine out, i.e. at least put them all in one box - right now they are here there and everywhere and not getting used.

Oh how lovely Jane! You've really been digging into your snippets there - with a great result. Tee, hee - I'm sure I have some of that foil hidden away too :)