I used to find any challenge that involved a one layer card, well, rather scary. There's nowhere to hide, everything has to be right first time. You can't stick an embellishment or extra layer on to cover up a blooper. And you need to be careful about what you do any colouring with - anything alcohol based will show through on the inside.

Anyhow, I have got used to them now, but I do tend to make very similar styles over and over again, so I was very pleased when my decluttering earlier this week brought up a copy of a magazine that had an article about one layer cards, with some suggestions of ways to make them.

For the first card, the idea was simply to use masking tape to create a frame before starting to stamp. Now why had I never thought of that? It makes it look as if the stamped area has been matted on to the base card, and yet it is still all one layer. I wish I had a classier looking sunshine stamp though! 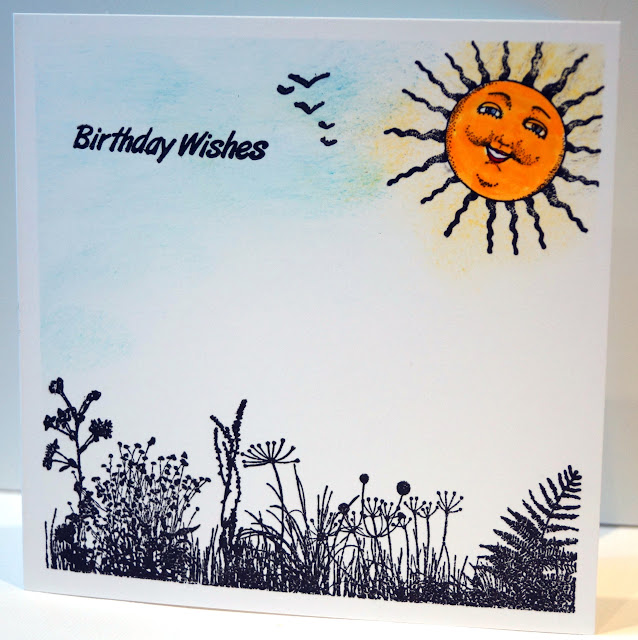 For my second card, I moved away from the traditional CAS aspect of a one layer card, to one with lots of colourful inking and stamping. It is more or less a CASE of one of the samples in the magazine, but using different inks, and different stamps, and adding a dragonfly...... oh, OK then, it's a whole new card!

To mask off the band at the bottom, I used LINED sticky notes. Lined ones mean you can be sure of getting a straight border, simply by cutting your sticky note along one of the lines and then lining up the cut line with the bottom of the card. Then I stamped the text, sponged over inks in shades of orange and mustard Then I stamped the flower silhouettes, first in one of the orange shades then in black.

After removing the sticky notes, I added a dragonfly and a greeting, and finished the dragonfly with Crystal Stickles. 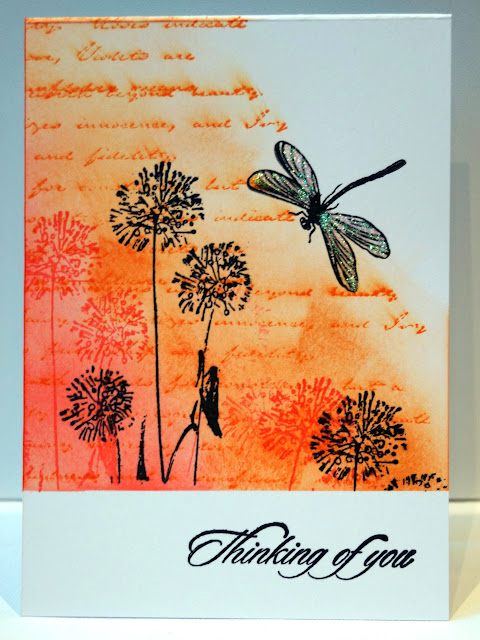 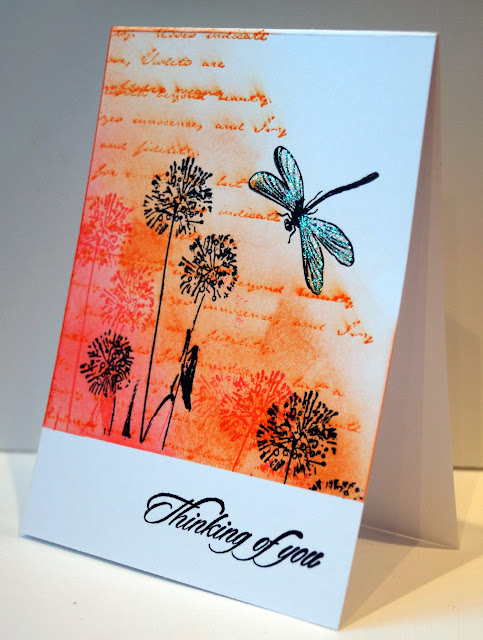 Addicted to Stamps and More - Anything Goes
Butterfly (well, in my case dragonfly!) Challenge - I for Inks
Stampin Royalty  SR#132 - One Layer Card
Posted by Jane Willis at 09:33

Wow Jane! These are fabulous, I especially love the second one - so pretty. Great tip about the masking of the border and bottom strip too!

Love the idea of masking around the card to give the appearance of another layer. Yes I often think CAS is very subjective in that clean and simple to one may not be the same for someone else. Thank you for the inspiration x

Two great one layer cards Jane. Your sun is certainly a very happy one. I like him a lot. The second card is gorgeous and the glitter on the wings is just up my street. Barbxx

Two beauties I like your idea of masking round the edges to create a faux border and again on the second card for the bottom border. Love your inked background and the colours are fabulous. the dragonfly looks perfect. Somehow a butterfly wouldn't have had the same impact. Thankyou for fluttering by my Butterfly inking challenge. Hugs Mrs A.

Your cards are beautiful and top tips there about masking. I used always to mask around the edge but recently forgot that I used to do it!

Those herbs are amazing! Thank you so much for joining us at ATSM blog!
Olesya, DT

Your warm orange is such a highlight on all the cards and the crisp masked line is one of my favourite one layer features.