At the Movies at Cardz 4 Guyz

It's time for our latest challenge at Cardz 4 Guyz, and this week our theme is At The Movies.

My choice of movie may sound like an odd one for a masculine card - Mary Poppins - but who could forget Dick van Dyck's terrible cockney accent in the old 1960s film of the story? And what part did he play? A chimney sweep, of course! I printed this chimney sweep decoupage from La Pashe's CD "Something for everybody" and combined it with a red brick backing paper from "The best of La Pashe 2012",

I've added some umbrella printed paper from a K & Company pad, as umbrellas are another thing I associate with the film. And the good luck sentiment is there because sweeps are traditionally a symbol of good luck - so much so that when I was a child, people would sometimes pay the local chimney sweep to attend their wedding! So this card would make a great good luck card for a man. 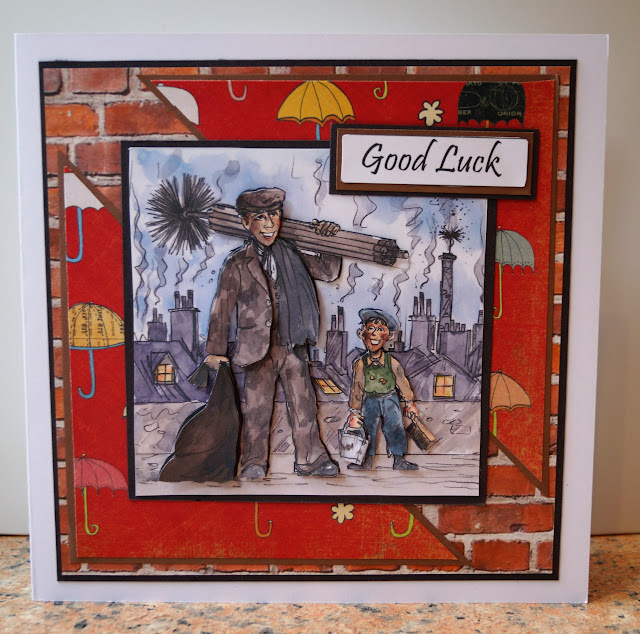 We'd love to see YOUR interpretation of our At The Movies theme.
Posted by Jane Willis at 09:00

Great card Jane, but I'm curious, did you find the image and think of a film to fit it, or search your stash to find something to fit the film?

A super card Jane, such a fabulous image and great design - your brick papers are perfect.
Pauline
x

What a great masculine card, Jane! Great interpretation of the 'At the Movies' theme. I'm trying to catch up with all my blog visiting. I'm not sure why I'm so behind. WOW! You have been busy since I was last here. I especially love ballon pop-up card for Lara. I can't believe you've never made one before! It's brilliant. Looking forward to seeing what you do with all your new crafty goodies. xx

Brilliant card! Apparently in the Forest of Dean area they still invite the chimney sweep to weddings. My colleague's son left the army and has set up as a chimney sweep there. I had to make a good luck card for him. Finally found a little Claire stamp I think it was that fitted the bill, wish I'd known about this! Cara x