Soft as a feather

Although the number of scheduled posts I left means it didn't really show, I've just got out my crafting goodies again after a week's break - family visiting from overseas meant we needed all the space we could muster so I had to pack everything up. That means I am WAAAAAAAAY behind on making cards for challenges and for forthcoming DT posts. I'm going to need to spend the next few days crafting my socks off!

It also means I am much later than usual in joining in with the Resist Technique challenge at the Sisterhood of Snarky Stampers. I'd been hoping that somewhere among all my sentiment stamps I would have one that said "I can resist anything except temptation" but alas I don't appear to have, so this time the emphasis is very much on the stamping rather than the snark.

I chose the Dylusions sentiment "Life is hard, your art shouldn't be" and then wanted a motif to contrast with the word "Hard". Although the context probably implies the opposite should be "easy", I spotted my lovely (and ancient) feather stamp from Santa Rosa and my mind immediately switched to the alternative opposite, "soft".

Stamped in Versamark and embossed with clear powder, I then sponged turquoise and green inks over to make the white background show through. Some tiny clusters of turquoise Liquid Pearls added the finishing touch. 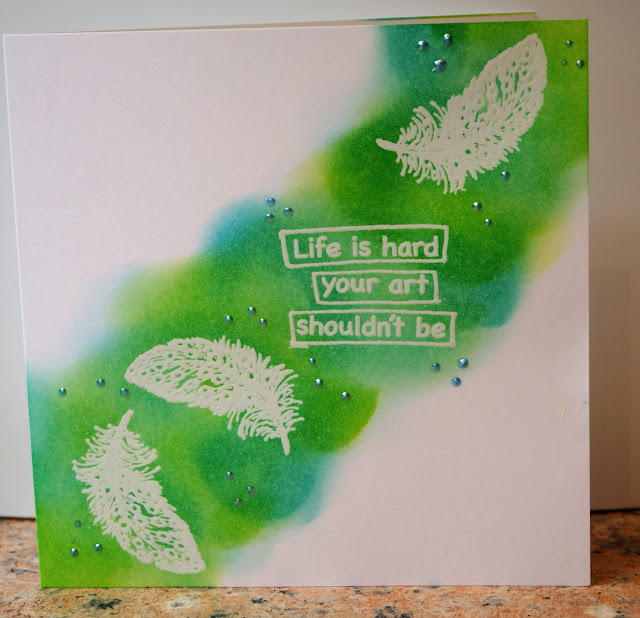 The resist technique works really well on this card. Combining the colours with the feathers reminds me of a beautiful peacock.

Beautiful kingfisher colours. Love the sentiment, if only it was true! Cara x

This is gorgeous! What a fabulous emboss resist! Thanks for joining the fun at the Sisterhood of Snarky Stampers!

Oooh! I love everything about this card! the simplicity, the white space, that amazing greenybluey color of ink and the Sentiment - this is just pefect! Thanks for playing along with us at the Sisterhood of Snarky Stampers for our "R" is for Resist challenge - I LOVE Your stuff!

Oh how pretty!!! LOVE the liquid pearls...what a perfect finishing touch, and you put it on so perfectly!

The placement of your feathers adds so much movement to your card, Jane. Thanks for sharing with us at ATSM this week.

Beautiful Jane! Love the feathers and the greens!!

Thanks so much for joining the sisterhood of snarky stampers for our "R is for Resist" challenge!

What a lovely translation of the inspiration photo; your feathers, and the sense of movement they create, are beautiful! Thank you for bringing your artistry to the ATSM gallery! Enjoy 'crafting your socks off" *grin*!
~carol