The saga of the Christmas Tree that didn't want to happen. 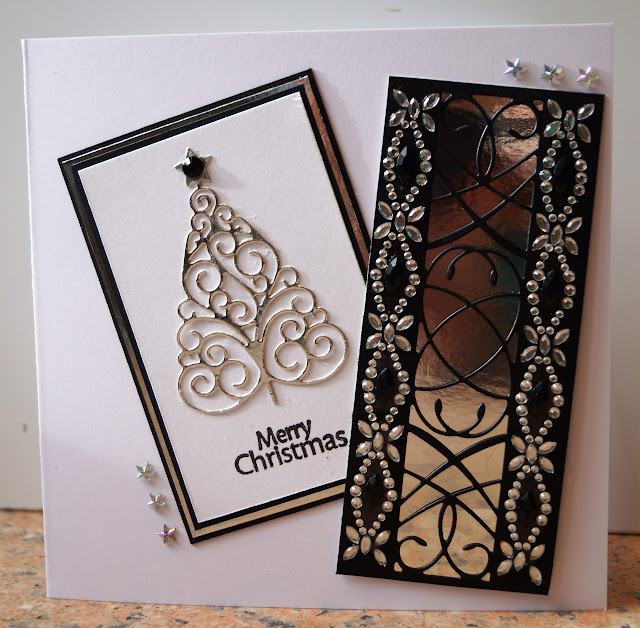 The basic idea this card is based on doesn't actually appear anywhere on this card. At the Make It show, I saw somebody die cutting shapes from Stick It double sided adhesive, peeling off one side and attaching it to card then peeling off the other side and foiling the resulting die-shaped adhesive layer.

A doddle, thought I. So I cut my Christmas tree, and went to remove it from the die, but the backing of the adhesive sheet came adrift and then the waste areas wouldn't come out and the tree got stuck to itself trying to prise it out of the die.

Next attempt - got it all out cleanly (eventually) and applied it to card, but as I tried to remove the second side of the backing sheet, most of the adhesive came away too. I know StickIt isn't a very strong adhesive so.....

Attempt three. I used an older piece of double sided adhesive sheet, I think it originally came in a pack of Sticky Dots back when QVC used to sell them. It held its shape beautifully and I manages to stick it all down on the card. Then the foil didn't stick to it properly and it came out looking patchy and ragged.

By this time I'd run out of small pieces of double sided adhesive and wasn't going to cut into a brand new sheet of StickIt for something that was so determined to fail, so I tried cutting the tree from a very glittery Cricut vinyl. I've cut many other dies successfully with it, but this little tree would NOT cut. I had several attempts. I added shims, I removed the protective coating from the vinyl, I put it four times through the Grand Calibur - Nothing worked.

It was either abandon my card or get back to basics, so I grabbed a piece of silver mirri and did what I jolly well ought to have done in the first place, just die cut it from that. 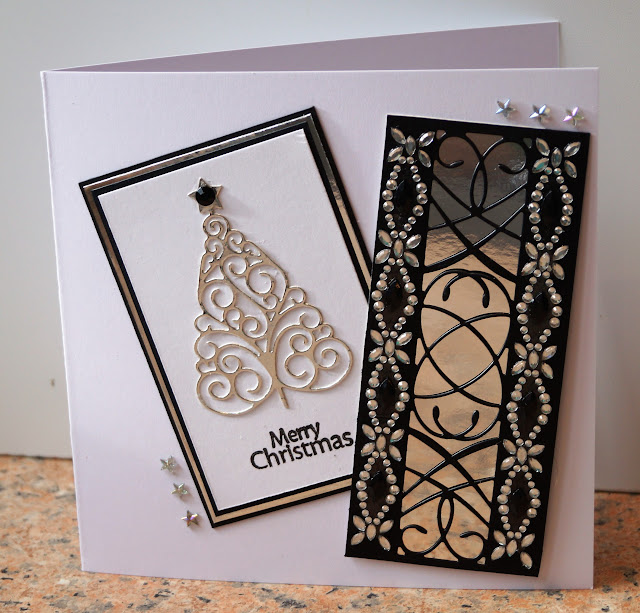 Are you still with me? I also cut this beautiful border, that I won over on Liz's blog, and backed that with silver mirri, and edged it with two ultra-blingy gem strips. It doesn't really show in the photo but there is an oval black stone in the middle of each oval (ish) space.

I put the two pieces on my card to position them, planning to have the black strip as a wide border along the edge and the tree topper upright beside it. But it just looked all wrong, just too disjointed. Everything had gone wrong with this card, so I decided to go and have a cup of tea and a think. And as I stood up, I knocked the whole blooming thing onto the floor!

This is how the topper and border landed and I suddenly realised the reason they had looked so disjointed was simply because they WERE disjointed. So I stuck it all together just how they had fallen, added a few crystal stars and went to lie down in a darkened room......

I am sharing this with
C.R.A.F.T - Christmas
Crafty Hazelnut's Christmas Challenge - No Patterned Paper
Jingle Belles - Bling
The Holly and the Ivy - Anything Christmas Goes

oh wow... what an incredibly beautiful and dramatic card, i'm sorry about the ructions with technique, but this thing was well worth your perserverence! so glad you could help us "bling on the holidays" at JINGLE BELLES! <3 <3 <3

Serendipity! It 's a stunning card. All that gorgeous bling plus two lovely dies and all that thought and work. This card is meant for a very special person. I love it. Barbxx

Beautiful card! Thanks for sharing at The Holly & Ivy Christmas Challenge.
~DT Janis

This is such a gorgeous card, and I laughed so hard during your fabulous retelling... That die! I have it and have so many projects that went much like your story. Why I kept trying to use it I don't know! When it works it's beautiful...never have figured out the secret to getting it to work every time! Thank you for sharing. I don't comment very much, for that I apologize; I continually enjoy your work and posts. Best, CG

Beautiful card, love your story. it was almost like my attempt at crackle paint. but in the end we won!!!

I had to laugh Jane - think I might have given up, not persevered as you did, and the result is a stunning card!

and she persisted ... great job ... and awesome holiday card ... so glad you helped us *bling* on the holidays at jingle belles.

Oh good grief - I's have beaten my head against the wall! Well done for carrying on Jane - really elegant and wonderful result! Stick-It is a bit of a patchy adhesive isn't it, how about the really strong Woodware red line sheets for a try? Only sayin' - just ducked as that wooden stamp came flying though the air :)

I thought I'd left a comment on this post but it seems to have disappeared - or perhaps I had a senior moment and forgot to press 'Publish'!

Fabulous card, Jane, although I did have a chuckle reading your journey getting to the finished result. xx

How strange, Liz, I'm sure I remember seeing comment from you. Blogger must have eaten it!
Jane