For my birthday a couple of weeks ago, my husband bought me a selection of stamps and dies, including the Marianne Creatables penny farthing die which I had been tempted to get having seen Liz use it in some lovely designs and the Viva Décor "Old fashioned! stamp set which also includes a penny farthing. And I have a bag of large printed buttons, which includes some with a penny farthing design. Putting them all together, I had the basis for a very masculine vintage card. And adding some vintage French newsprint-style backing paper from the Dovecraft Curiousity Corner range and a deckle edged backing card gave it an even more vintage feel.

I stamped the penny farthing and corners on the newsprint, then mounted it on a snippet of purple card. The die cut was made from another snippet of the same card, and mounted on a scrap of cream edged with purple ink. 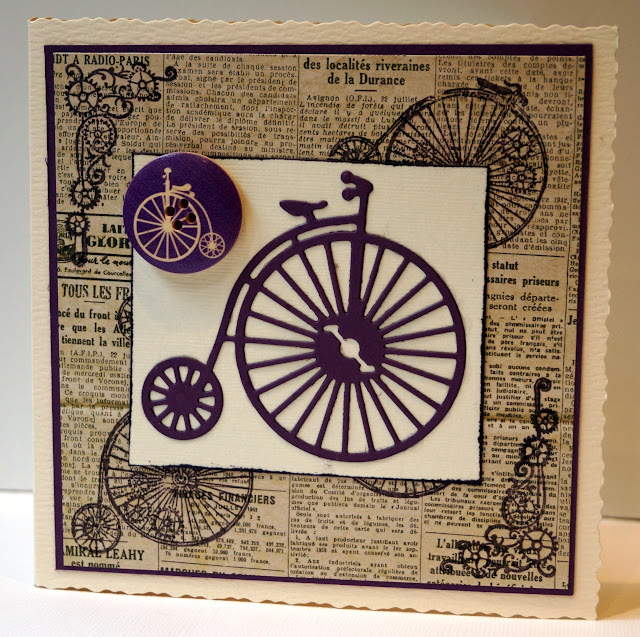 Edit - I've edited this in to explain the term "Penny Farthing" in response to a comment from MaryH below. I had no idea that the bicycle in the picture wasn't called a Penny Farthing all over the world, and it's only this comment that has made me realise that it isn't! But now I stop and think of it, why WOULD it be called that in countries where pennies and farthings weren't part of the currency? Even a British person less than 50 years old might not understand it.
In Victorian times, the British pound was made up of 240 pennies, not 100 as it is now. Each penny was a very large copper coin. The farthing was worth a quarter of a penny, and was a very small copper coin. So when this bicycle was invented, people thought it looked like a penny and a farthing side by side - hence the name Penny Farthing. I don't know whether it has an official name, or what it is called in other countries - if you know, I'd love to see a comment letting me in on it!
Posted by Jane Willis at 12:48

Fabulous card Jane - everything goes together so beautifully - just perfect! The button and background paper are a match made in heaven along with the stam set and that gorgeous die!

We have a small framed penny farthing here. I was given it as a gift many years ago and the wheels are the old currency - a penny and a farthing :) That's today's snippet of useless information for you :)

The penny farthing stamp and die looks brilliant combined with the newsprint background. Thanks for playing at The Male Room.

Love the whole idea of this card. The layout and colours are gorgeous. Clever idea and loving it!

OK...Since I'm in the USA, I'm at sea with the 'penny farthing', but I sure do like the look of this lovely card. The print background is quite wonderful with the antique cycle, and the 'button trim' (which I guess must be the penny farthing...:-) - is just completely perfect to complete this entire ensemble. Well done!!! Very classy & pretty. TFS & happy wkend.

Thanks so much for the interesting explanation of how penny farthing came to be called such. I have always loved words, and it's fascinating to find how something came to be called 'so'. (and I'm always delighted when I find the meaning of some bit of cockney rhyming slang too. I love how our English & American words can be so different for the same item too). Now that you've explained the meaning, it's very apt. Now when I see this object I will know it's called by another & very creative name!!! Appreciate your taking time to explain. Hugs

This is a lovely card Jane. Congratulations on being one of Di's picks this week. Barbxx

It's a gorgeous card and I learnt a lot too, although I knew it was a Penny Farthing had no idea that the pound was 240 pennies and farthing a quarter of that! A fab card which I think a lot of me would love, congrats on being a pick at Pixie's too Karen x

Vintage perfection. I really like the newsprint behind that fab Penny Farthing (no idea how they manged that bike). Thanks so much for playing along with The Male Room, and I'm sorry to be late commenting! xx

Thanks for the explanation for the name too xx