This snow bauble stamp and the snow scene stamps I have used with it are NBUS that I've had for several years. They originally came from Dimension Fourth sets - I'm not sure now whether they are all from one set or from two different ones, but the selection I have include some buildings, more trees and a deer, so they will work together beautifully for building up scenes - now I've remembered that I have them!!!

First I stamped the bauble and masked it off, including the foliage at the top, then stamped and masked the skaters - these are separate stamps and there is a third skater too,  so they can be used in various combinations. I masked them too and stamped the trees. I used Versafine ink for all the stamping, so that I could watercolour the scene. Leaving all the masks in place, I used water-based markers scribbled onto acetate scraps and a water brush to paint in the ice and sky, then with the grey marker I had used for the ice,  added a few strokes from the pen to give shadows below the skaters, blending the shadows out into the ice with the waterbrush.

Then I removed the masks from the skaters and coloured them in with markers and waterbrush as before.

I used a product called Opal Dust to give the snow sparkle, adding a little to the trees as well. This is a product I've had for many years, a viscous liquid with opalescent flakes suspended in it that you squeeze out onto a pallette (or in my case a scrap of acetate) and apply with a paintbrush. The effect tends not to show up on photos, which is a pity as it looks great in real life, especially on snow scenes, so here is a photo taken at an angle to show the effect. I don't know whether Opal Dust is still available, and I was originally sent it in a RAK so I don't know where it came from!
EDIT - a quick Google shows me that Opal Dust, by Jo Sonja, IS still available from many retailers all over the world! 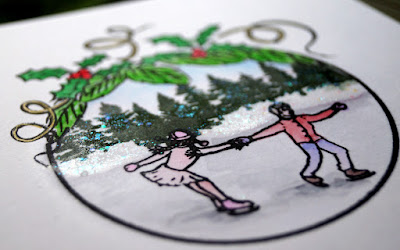 When everything was dry, and with the bauble mask still in place, I sprayed everything with a thick coating of Crafters Companion Spray & Shine which was supposed to give it a glassy bauble-like finish. Unfortunately it seemed to just seep into the card and didn't leave any gloss at all. That's the third time I've used it now and I don't know whether I'm doing something wrong or have a faulty can, as I've had no success at all with it. However, any LIM-ettes reading this, please take now I DID spray it!!!!

After removing the masking, I coloured in the foliage using the markers in the normal way, to make the colours stronger than the watercoloured ones on the bauble. 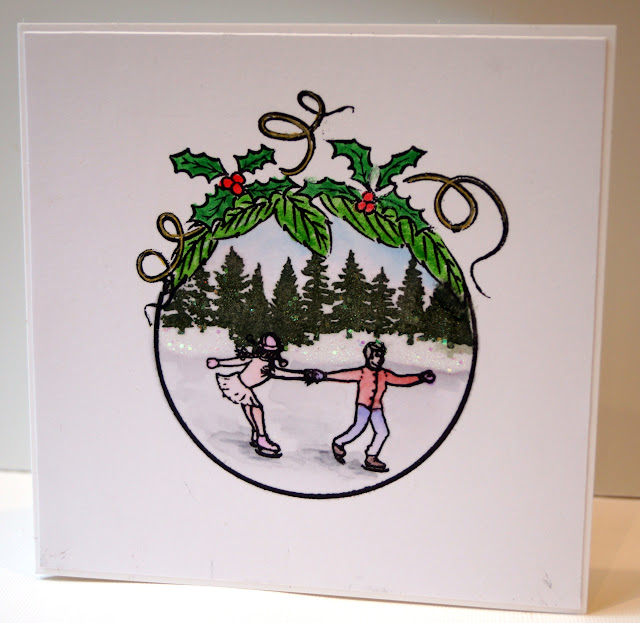 I am playing along with:

Shopping Our Stash - Splish Splash
Winter Wonderland - Create a Scene
Less is More - Sprays/Mists (even though the spray didn't actually work!)
Addicted to Stamps and More - Clean and Simple
Posted by Jane Willis at 16:52

Lovely card. I've tried using the spray and shine with the same problems - I binned it in the end!
Elaine

Wow, this is gorgeous. Have a nice weekend, Ankie

This is lovely Jane. It really has an icy wintry feel to it. Isn't it lovely when you dig out NBUS - it's like getting new stuff. I also threw my spray and shine away. I'm your new follower. Barbxx

Such an adorable image!! Really love the sparkle and this is such a great CAS design!! Thanks for sharing your creation with us at Addicted to Stamps & More! Hugs & Smiles - *Vicki*-DT member

Lovely card, Jane. The bauble is a really unusual design. I've never heard of Spray and Shine, but reading the comments, I don't think I'll bother to get any! ;-) xx

Classy, elegant and a fun and superb Christmas card Jane.
Thanks for playing along this week.
Sarah
Less is More

Such a lovely image and I love how you colored the holly and berries! Thanks so much for playing along with us this week at ATSM!

Brilliantly put together, Jane. What a shame the spray didn't work, how annoying, we won't penalise you though ;) Such a great design idea putting your little scene in a bauble.
Thanks so much for sharing at LIM and ATSM, Anita x

This is such a gorgeous scene you created on your fabulous card! (And so much work involved in getting it to look this way! LOL!) Thanks for joining us this week at Shopping Our Stash!

This looks great anyway Jane... is your nozzle blocked or is it old? Sounds a little strange. I sometimes find that cans and bottles refuse to spray if either of these two things have happened!
Thanks so much
Chrissie
"Less is More"