Playing with my Christmas Presents

Santa was very kind to me this year and brought me all kinds of lovely craft goodies.

My present from my Mum was a set of 12 colours of Brushos, something I've never used before. (Incidentally, why are they called Brushos when so many ways of using them don't require a brush? ) and I've been having fun experimenting with them.

My first card was made with one of my very first attempts - I used far too much of both the crystals and the water, and thought the finished result might hit the reject pile, but then I decided that as a bold background for some lighter coloured stamping it might actually be very effective. 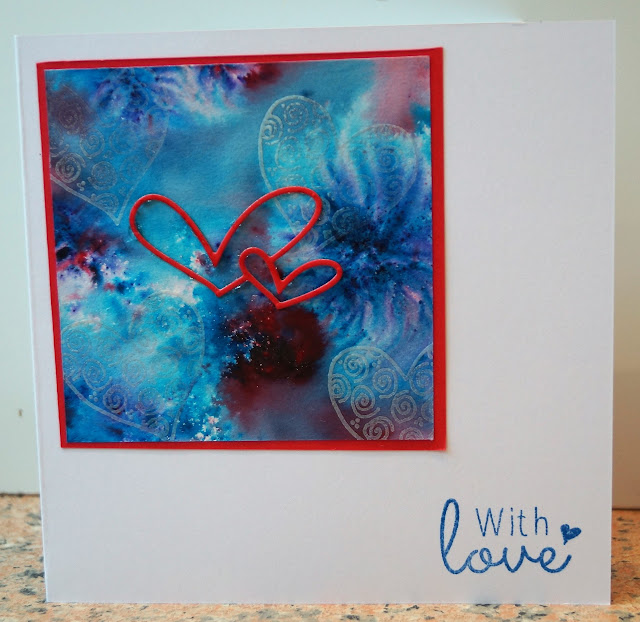 I stamped the patterned heat over the background in white and then embossed it with a translucent pearl powder. The stamp is a very old unmounted one that I received in a RAK about 20 years ago! Then I topped it with a beautiful pair of die cut hearts, made with my very newest die, the Gummiapan Double Hearts die from Swedish House Crafts - I've added the link as they are a very new site that you may not have come across and they have some exciting dies at bargain prices. The sentiment is from my favourite magazine freebie set from a couple of years ago.

I would like to share this with
Cut it Up - Out with the old, in with the new
Craft Rocket Challenge - Something new
Little Red Wagon - Something new
Mod Squad - Anything but Christmas
Rubber Dance - Red, white and blue 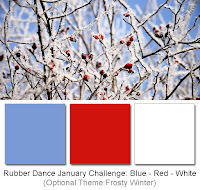 I was going to share a second card in this post, but you're probably already getting RSI from scrolling so I'll put it in a separate post.
Posted by Jane Willis at 13:50

That background gives a great impact on this card Jane, I like the heavy colours.

Lovely card, Jane! Brusho backgrounds are fun to make, aren't they? I think this turned out really well and looks good with the white stamped hearts and the bold red ones on top. Thank you for joining our January challenge at Rubber Dance ♥

Your Brushos background looks fantastic and I love the way you've used it. The colours look great. Have lots of fun with your new present. Barbxx

Ohhhh! I LOVE brushos!!! Your background looks amazing. Thank you for joining us over at the Rubber Dance challenge. xx Susanne.

Cut It Up Challenge Blog said...

I love the bold colors, and they look great grounded by the red mat. Gorgeous card!

Thanks for joining us for our Out With the Old, In With the New challenge at Cut it Up, and Happy New Year! Enjoy using your new supplies.

Brushos are cool! Love that heart die cut. Thanks for joining us at Little Red Wagon.

Super cute!!! Thank you for joining us at Cut It Up, good luck!!! Amy DT

LOVE what you have done with that background. The white heat embossing over the watercolored background is so effective - GENIUS!!! Great take on the challenge, thanks so much for playing along with us this week over at the Mod Squad!!!
Judy ~ Challenge Host

Gorgeous background. Brusho's are such fun. Lovely card. Thanks for joining the Rubber Dance challenge. Hugz

On my wishlist: Brushos!! WoW, I love your card, The colours seems to explode.
Thank you for joining the Rubber Dance Challenge!
Hugs, DT-Anita

Stunning make , Thanks for playing at Crafty Rocket challenges ,

Thank you for an enjoyable blog, I look forward to more of the same in 2017.
หนังออนไลน์