You may recall that a couple of weeks ago I mentioned the lovely Uniko stamp set with hibiscus flowers and a toucan that I bought last year. I bought it because I fell in love with the toucan, and since getting it have used the floral stamps and sentiments many, many times and yet the poor toucan had never seen ink.

Well, today I was determined to put that right! I stamped and embossed him in black, then coloured in the bill with Promarkeers. While looking at images of toucans, I discovered that there are several different types of bill colouring, one of which is really funky but would have clashed with all my punched leaves, so I'll try that another time. 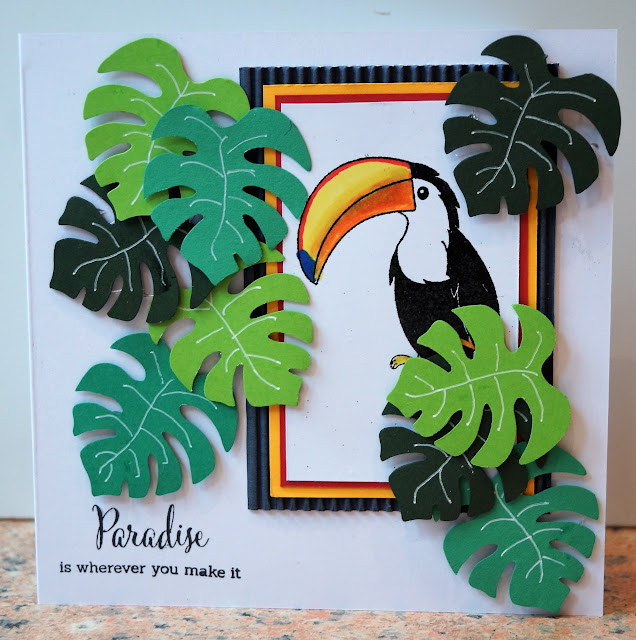 I used snippets to match the bill for the layering and a handful of green snippets for the punched Monstera leaves. I made some of them overlap the bottom of the toucan, as the image appears to be hovering in mid air with his wings folded, something I'm pretty sure toucans can't do. He needs a branch or creeper to sit on and there isn't one on the stamp. Stamping or drawing one in would require some pretty clever masking so I decided to simply cover the problem up instead!
The sentiment is from the same stamp set.
This has used up quite a lot from the snippets box, so it's very appropriate that I'm sharing it with Pixie's Snippets Playground
And ever since the 1960s when toucans used to feature in Guinness adverts, I've thought of them as very masculine birds, so this would make a great card for a man (especially an older Guinness lover!) so I'm sharing it with The Male Room where the current challenge is Anything Goes.
Posted by Jane Willis at 13:41

Awesome card - lovely Dschungel you created with all those leaves and that toucan!

What a fabulous card - I love your toucan. He's a gorgeous boy and looks perfect hiding behind those luscious leaves. Barbxx

Wonderful card Jane! The toucan is fabulous and those punched leaves are such a perfect foil! Great sentiment as well :)

A fabulous card Jane, I love the toucan and the wonderful leaves too. Such a tropical feel to the card even if the weather is a bit frosty here.

A great card Jane. The toucan is wonderful and so are those leaves.
Carol
xx

This is a delightful happy and fresh card, love the toucan and the leaves, beautiful colouring. Thank you for joining us The Male Room ATG challenge. Faith DT

Hi Jane I just popped over from the Playground to have a closer look at your fabulous card. Love that Toucan with all the super colours and wonderful sentiment, Congrats oon your win too xx

Oh that's a fun title!! I think your toucan is just fab - brilliant colouring and I do like the lovely lush leaves! Great work. Thanks so much for playing along with The Male Room Anything Goes challenge. Deborah, DT.

You made such a beautiful male card :-)) I like the big leaves.
Thanks for playing at Male Room. Hugs, Andreja

I love your artwork and follow you pots this very minute!
หนังออนไลน์