Dish of the Month - Pork Belly and Beans

I seldom join in Dish of the Month - the challenge run by Farmersgirl Kitchen where we share the Nigel Slater recipes we've cooked - because although I devour every word he writes and every moment he appears on television, I tend to use Nigel's  recipes for ideas and inspiration rather then as formulae to cook from. However I've seen so many positive reports of his Pork Belly and beans, the recipe for which appeared in the Guardian earlier this year and can be found on the Guardian website, that I really had to give it a go.

Unlike some food writers, Nigel Slater isn't didactic about his recipes being followed to the letter, preferring people to use them as starting points for their own dishes, which is as well because for what must be the first time in my life I found there wasn't a cannellini bean in the house. Neither a dried one or a tinned one to be found. But I did have a tin of flageolet beans, and on the quiet I prefer those, so they went in instead.

Then the Cavolo Nero -  well, the recipe was published in February, and if I'd made it then we'd have had a gardenful. But it's all eaten now, and the plants removed to make way for the summer shift (it's like hot desking in our garden). However there was half a Savoy cabbage in the fridge. Let's see now..... looking at the recipe .... 200g to serve 4 people.... halve that to serve 2..... 100g? 100g of Savoy cabbage? One of my favourite vegetables? How about half a cabbage instead? Yep, 350g, that looks about right.

So with the beans changed and the cabbage almost quadrupled, here is my finished dish. 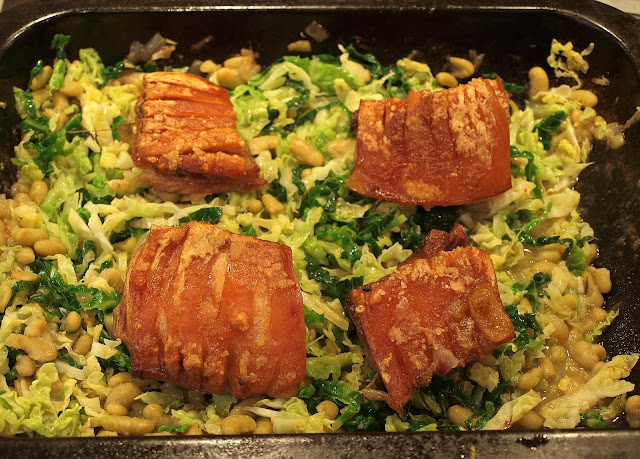 And it was absolutely WONDERFUL. All the things we should NOT be looking for in the middle of May - warming, rich and comforting - that this year's miserable weather leaves us crying out for. I'll be making this a lot more in the future - and I'll carry on piling in the cabbage! 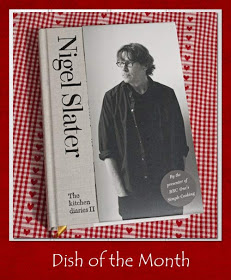 This month, Dish of the Month is being hosted by A Little Bit of Heaven on a Plate -  very appropriate, considering how heavenly this dish was!

You have done a great job of the recipe, it looks great, like you say just the job for May weather. Thanks so much for taking part. x

I like flagolet beans too, but belly pork isn't for me, glad you enjoyed though. Thanks for joining us for Dish of the Day.

Yay! You finally made it. Looks good.