In the pink..... eventually

This week is the dreaded One Layer Challenge at Less is More, and this time we have been tasked to use a coloured card blank, so I couldn't fall back on my usual trick of stamping in black on a white card and then colouring it in! Sneaky, isn't it?

I  started off with a yellow card blank, and embossed a sunflower on it in brown. On my first attempt I smudged the sentiment. On my second attempt I got a brown splodge on the spine of the card - but I had to press on as I had no more yellow card left. The image and sentiment came out well but oh dear, I picked up the wrong pen to start shading the petals with, and as it was so dark I had to carry on, but it made the whole thing look a dark, sinister mess. Just to make matters worse, I managed to brush against the bottom corner of the card with my wrist and bent it up. 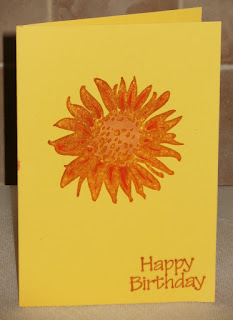 That one headed for the bin as soon as I'd snapped it. It actually looks even worse in real life than it does in the photo.

Next I moved on to hot pink card,  which I decided to stamp and emboss in white. Unfortunate3ly as I stamped one of the swirls, I smudged the stamp and my efforts to remove the unwanted ink just made things go from bad to worse

Luckily I still had some pink card left, and managed to complete the card with no further hitches. 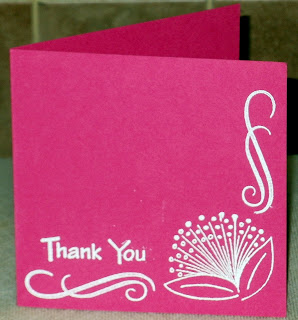 Your post totally cracks me up because it reminds me of ME! lol The hardest cards always end up being the ones that are supposed to be the easiest! I'm glad you stuck with it and finished your card. I love the white on pink! Thanks for playing at ATSM in our CAS challenge. :)

Stunning pink card, I really like it! Perfect one layer style. :) Thanks for joining us at ATSM this week!

Sweet cards Jane! Sounds like a bit of a saga in the making thereof though!
I'm sorry I'm a bit slow getting around to commenting this week but I've been on grandchildren duty since last Thursday!
Thanks so much
Chrissie
"Less is More"