A few days ago I treated myself to a copy of Nigel Slater's new book "Eat". It's a rather oddly presented little book - the small page format means that the book is very thick and hard to keep open at the right page, which is a nuisance when you are trying to follow a recipe (or take a photo - witness my struggle below!) It also means that many of the recipes are only illustrated with a tiny photo and the follow up suggestions have no photo at all. I'm quite happy with the pictures in my head, but I'm also aware that photos sell books, especially at this time of year. 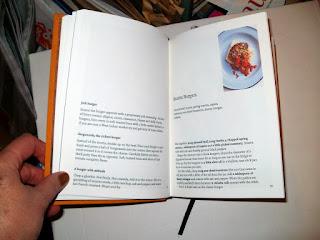 There's  also rather a lot of blank space and the main recipe is generally on the right hand page with follow up recipes and notes on the left, which makes it difficult to actually sit and read the book from cover to cover as I tend to do with Nigel's books.

Having said that, the book is barely a week old and is already bristling with post it notes and oozing with cooking stains, and to me any cookbook that gets into that state so quickly has to be a good one! It's very much a book to be used,  not one to pose on a coffee table, which makes me even more surprised about the lack of lay-flat-ability. And it's too thick to fit in my clear cookbook  stand, which would have held it open.

Last night I made the Pinto Beans, Chorizo and Tortilla from page 337. The recipe doesn't seem to be online anywhere (yet) but it consists of diced chorizo and onions fried together in some of the oil from a jar of sundried tomatoes, mixed with garlic and tinned pinto beans, topped with torn flour tortillas and chopped sundried tomatoes, given a topping of grated Cheddar and baked. 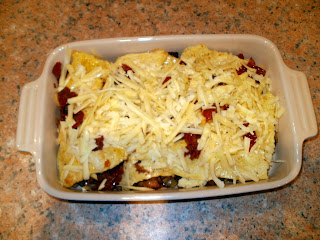 We served it with baked sweet potatoes, chipotle mayonnaise, and  salad with avocadoes. A very typical Nigel slater dish - simple and faff-free but absolutely crammed with flavour. 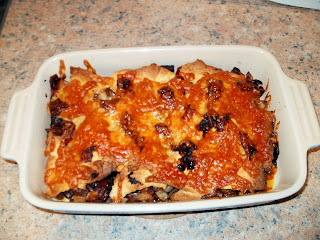 And very hearty - I halved the four person quantities but we two greedy people couldn't finish it.

I haven't joined in with Dish of the Month for ages, but I'm playing along this month. 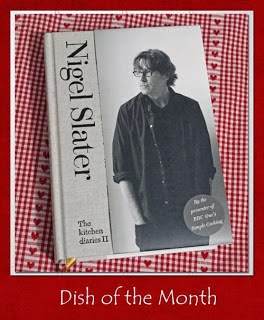 great and honest book review... sometimes publishers do this stupid 'style over substance' thing that they simply don't think of the chef at the end of the day who has to have it in their kitchen... the tortilla does look wonderful though!

It's a great pity the publishers do things like this - especially when it's a book that HAS substance and would stand very well on its own merits if it was published in a more conventional format.

Hi Jane, thanks for joining and the recipe looks tasty...

I have a copy of EAT and I agree with everything you say, its a strange recipe book...the small pics don't bring much to the party. I have every confidence that the recipes will be great but haven't been as drawn to it nearly is as much as Kitchen Diaries II which I just love.

Love your book review, Jane! This looks like an inspiring recipe.