I must start by apologising for the lack of photos in this post – that’s because everything was eaten before I stopped and thought it might actually be interesting to blog about it!


Inspired by the Guardian’s Live Better Food Waste Challenge and the monthly No Waste Food Challenge from Elizabeth’s Kitchen Diary, which this month is hosted by Cooking Around the World, I decided to see just how little food I could waste over the course of a working week. 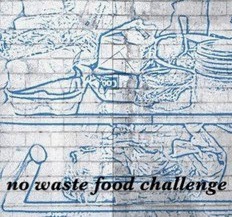 I started off by checking the fridge and cupboards – no use replenishing things that are already there and ending up with so much that some of it goes off – to make sure I had the basics that I consider essential:


herbs (mostly fresh from the garden)
spices – I keep a good selection because of my love of curries
dried fruit of some kind
tinned tomatoes (these are getting expensive now, so I always stock up when there’s a BOGOF offer)
tinned chickpeas or other pulses
baked beans
tomato purée and/or ketchup
soy sauce
plain flour
garlic
onions – have you noticed that some supermarkets now have them in sacks at a fraction of the price of loose ones? I keep a sack in the cool, dark garage where they last for weeks, bringing a few into the kitchen as I need them
rice (long grain and risotto)
pasta
red lentils
bread or flour and yeast
milk
eggs
butter and/or oil
cheese suitable for grating or cooking
lemons
ready made mayonnaise
If I didn’t keep “ice cubes” of home made pesto in the freezer, I’d probably add a jar of pesto to this list too.


Actually if you have all of the above, you can cobble together a meal without even visiting the shops: a risotto, pasta with tomato sauce, herb omelette or macaroni cheese, for example. I make sure I have everything on the list and if anything is running low, add it to the shopping list straight away. Things that aren’t immediately perishable can be  bought when on offer and stored to use later.


Now on to my shopping list for the week’s meals. I planned the meals so that leftovers from one meal would form the basis for others later in the week. As well as the above basics, which I already had,  I bought (for two people)


Here are the meals – I’ve only planned for 5 days on the assumption that most of us are less disciplined at the weekend but stay on track during the week!


Roast chicken, leeks, carrots,  roast potatoes, gravy, using about half of each of the leeks and carrots. Keep the leek trimmings, carrot peel and onion trimmings and skin (from the sausage nuggets) for tomorrow’s stock.


take a third of the pack of sausage meat and mix in a bowl with a couple of tablespoonfuls of  chopped dried fruit (I used apricots). Finely chop a very small onion and fry until soft in a little oil. Allow to cool then mix into the sausage meat mixture. Season – you can add fresh herbs or spices at this point too – mix together well and form into balls about the size of a walnut in its shell. Pop round the chicken for the last 30 minutes of roasting.


After eating, save the rest of the chicken plus the carcase, skin and bones, any left over gravy and any left over veg (in the unlikely event of there being any sausage nuggets left, they are great cold on sandwiches)


Make stock – remove  the meat from the chicken carcase and set aside, then chuck the skin and bones into a pan with the leftover gravy, any left over veg (except potatoes, save them for day 3), yesterday’s veg trimmings and any or all of the following, depending on what you have: a few peppercorns, cloves, mace, thyme, parsley or bay leaves. Cover with water, simmer for a couple of hours and strain. Keep this stock for later in the week.


Preheat the oven to the temperature suggested on your pasty pack. Cut up the left over chicken into bite sized pieces. Cut a piece of the puff pastry sheet to fit the top of your pie dish. Wrap the remaining pastry tightly so it doesn’t dry out, you’ll need it tomorrow! Slice a third of the mushrooms and fry gently in butter until tender and the water has evaporated. Dust in about a tablespoon of plain flour and stir in enough milk to produce a thick sauce. Season and allow to bubble for a minute then stir  in the chicken and tip the mixture into your pie dish. Cover with the pastry, crimp the edges, cut a steam hole in the centre and brush with beaten egg, saving any left over egg for tomorrow.


Bake for 25-30 minutes until risen and well browned. Serve with boiled potatoes (cook one or two extra if there were no roast ones left from yesterday) and two thirds of the pack of green beans. Keep any left over veg.


Roll out the left over pastry thinly into a rectangle, and place the remaining sausage meat along one edge of the rectangle. brush the free edge with beaten egg, roll up and cut into sausage rolls. Brush the tops with beaten egg then bake, giving them 20 minutes in a hot oven then 20 minutes in a moderate one. You may need to cover them with foil or greaseproof paper to stop them over browning.


Serve with braised mixed vegetables – trim the rest of the dwarf beans into matchstick lengths, cut an equal quantity of carrots into batons, and slice half the remaining mushrooms. Put them all in a pan with a tight fitting lid, along with a knob of butter and any fresh herbs you have to hand – chopped thyme is delicious – place the pan on a very low heat and cook for about 20 minutes until the veg are tender. Don’t remove the lid until you’re ready to check they are cooked – shake the pan every few minutes so nothing sticks and burns.


Dice  the potatoes you’ve saved over the last couple of days and mix with mayonnaise for a quick potato salad to go with the sausage rolls and veg. If you have some chives to add to the mayo, so much the better.  Keep any left over veg.


Put 75-100g of rice per person in a measuring jug and make a note of the volume. For the rice, ideally use risotto rice. If it seems too expensive, pudding rice is a good substitute, although you will find some broken grains, otherwise use long grain rice but watch out for it going mushy rather than creamy like a proper risotto.


Measure double the volume of rice out of your home made chicken stock into a saucepan, bring to the boil and keep just below simmering point.


Chop the last of your bag of leeks finely and cook in oil or butter in a non-stick pan until tender. Slice the remaining mushrooms and add them to the pan. Cook for another minute or two then stir in the rice and mix it well. Pour in about a third of the stock and allow to bubble gently until absorbed. Repeat with the next third and the final one. If the rice is still not tender, cover the pan and leave it for a few minutes over the lowest possible heat. Season well and serve. There is no real protein in this dish (well, mushrooms have a bit, but you might want to add more) so if you like you can stir in a handful of grated cheese before serving. It adds to the creaminess of the risotto too.


You will need 50g of red lentils per head, any left over cooked veg you have saved, any left over fresh veg, 1 medium onion, oil or butter and the rest of your home made chicken stock. For two people you’ll need about 750 ml of stock – if you don’t  have this much left, dilute it with water, or milk if you prefer a creamier soup.

Chop the onion and fry in oil or butter until lender. Chop any left over fresh veg and add them to the pan with the lentils. Fry for a minute or two, then add the lentils, stock and left over cooked veg, roughly chopped, then stir in the stock. Don’t season yet or the lentils will go tough! Simmer until the veg are tender and the lentils disintegrating. This will take between 20 and 35 minutes depending on how old your lentils are. Then either whizz in a blender or with a stick blender until smooth, season, reheat and serve.

An excellent No Waste Food Challenge entry! Some fab recipes in there, I especially like the sound of those sausage nuggets! Yum! I too make chicken stock with the carcass, but I add a capful of cider vinegar to the water before simmering. I read somewhere a long time ago that this helps leach the calcium out of the chicken bones, thereby enriching the stock further. Thank you for sharing with the No Waste Food Challenge! :)

That is quite some good planning to make the best use of the food you have. The list at the beginning looks like how I like to keep it with my pantry, if I manage. I also like the idea of making the chicken stock. Thanks for joining the No Waste Food Challenge! You must understand, though, that I will not add a photo to the No Waste Food Challenge Pinterest board. :-) I know how it is, eating is more important than taking pictures. 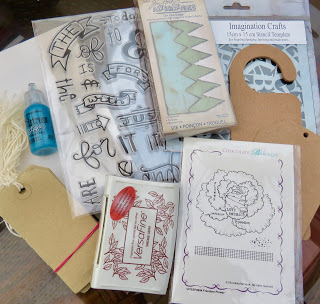