Several years ago now, I spotted some sheets of rub-off transfers in one of the general purpose cheap superstores - something like Home Bargains or Poundsavers, it's so long ago I can't remember which. They looked rather more tasteful than many I'd seen, but at £1 each I didn't want to buy a lot so just popped two into my basket, a butterfly and a dragonfly. I kicked myself when I got home and realised I'd actually been charged just 1p for each sheet. If I'd realised that was the price I'd have bought the lot!

Anyway, since then they've just been hanging around in my stash, the way impulse buys tend to do, and were in danger of starting to get a bit dog-eared, so I decided to use the dragonfly sheet for the current Mod Squad challenge, The Wing's The Thing.

I rubbed off the main and secondary images onto white card, cut them out and added a touch of crystal Stickles to the wings. It would have been useful if the secondary image had been the same size as the first, so that I could have layered it up for dimension, but as it was significantly smaller I cut away the leaves from it and used it as an embellishment instead.

I covered the base card with dotty paper, inked the edges and stamped a large dragonfly randomly  all over, then added the dragonfly image on top of a panel of green woven-effect printed paper with lightly distressed edges. 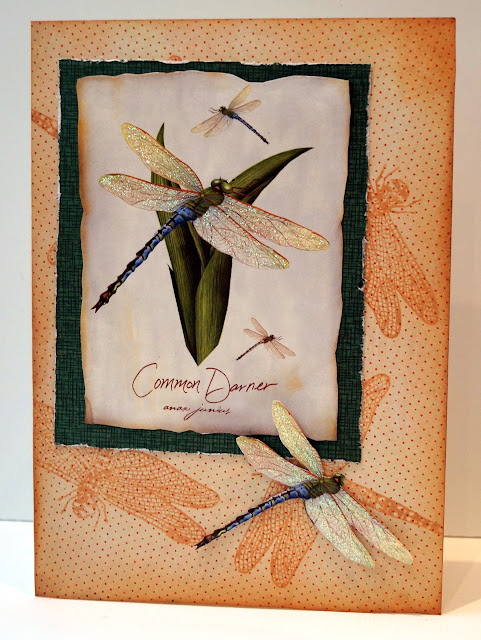 I am also sharing this with Crafty Hazelnut's Patterned Paper Challenge for July.