This is a total fridge dive dish - if you follow me on Facebook or Twitter, you'll know that I've spent most of this week waiting around for repair men, which has meant no chance to go shopping. So last night's dinner was very much a fridge-dive affair. Which made it perfect for a #KitchenClearout creation to share at Madhouse Family Reviews.

I pulled out of the fridge the end of a butternut squash, about a third of a packet of feta cheese that was threatening to walk out by itself, and half a pomegranate. So there are no set quantities, use as much of each as you happen to have!

I cut the squash into slices 1cm thick - I decided to leave the skin on as I was slicing it relatively thinly, so it wouldn't collapse, but as neither of us likes eating the skin I think with hindsight I would peel it and cut larger chunks. I tossed the slices and a small thinly sliced onion in about 1tbs of rapeseed oil, ½ teaspoon dried oregano, a good pinch of dried chilli flakes, salt and pepper, then spread it in a roasting tray and cooked in a hot oven for about 40 minutes, turning the slices once.

When it came out of the oven, I scattered over the pomegranate seeds and the crumbled feta.

The sharp, salty feta, sweet, soft squash and juicy, crunchy pomegranate seeds made a wonderful combination that I'm going to be repeating in future! I think it looks rather wonderful too, but Mark says it looks like something you'd see on the pavement outside the kebab shop late on a Friday night....

Oh just an afterthought, this could be done with pumpkin instead and would make a great way of using up whatever you've scraped out of your Halloween pumpkin! 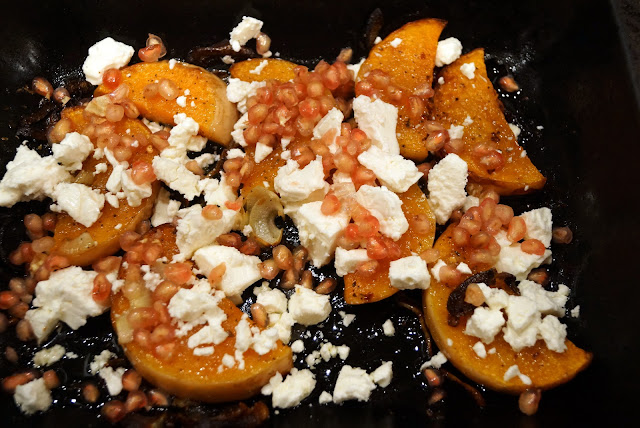 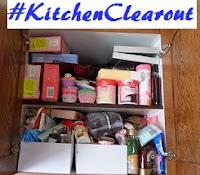 LOL at Mark's comment - I can see where he's coming from, but I can just imagine the contrast of the flavours and textures too - fab ! :)