A cat with attitude

Until a few years ago, I owned the ultimate Cat With Attitude, Charlie. He was such a handsome chap, and could be very affectionate, but, like everything he did, it was always on exactly his own terms.  I don't have many photos of him on the computer, as I was still using old-fashioned film at the time, but here he is demanding a belly rub. 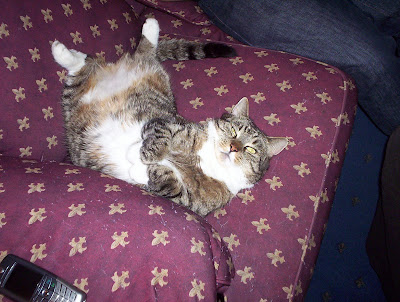 So I thought this rather snarky sentiment from the Dylusions "Laugh till you leak" stamp sheet was perfect for using with a cat image. The cat itself is an old PSX stamp called "Waiting for dinner" which I have stamped with brown Memento ink and then coloured in several shades of grey Promarkers to give a silver tabby effect.
The tiny-teeny cat and mouse embellishments are actually tiny buttons. Normally when using a shanked button, I would use pincers or wire strippers to cut off the shank, but these were too tiny for even my jewellers tool, so instead I cut a hole through the topper and mat and inserted the shank through, holding the button in place with clear adhesive. The shanks are so short that the topper sits flat on the card below.
I used grey ink to stamp a very delicate fishy background, so as not to draw attention away from the cat - because the cat simply wouldn't stand for being anything less than the centre of attention! 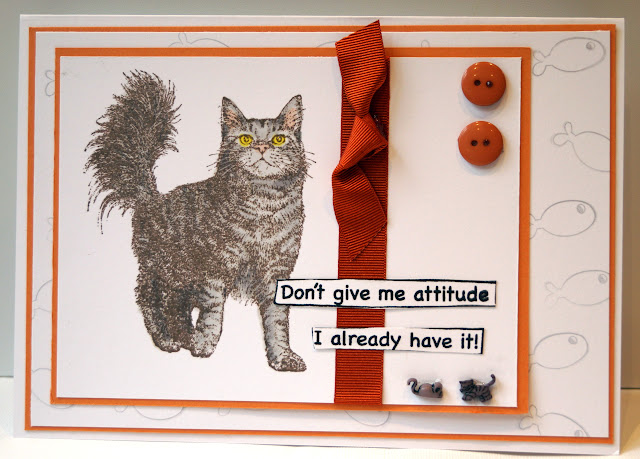 ﻿
I am joining in with

Hi Jane
I too have owned a cat with attitude who always complained loudly when things were not the way he wanted them to be! Your card is gorgeous and the attention to detail if fabulous.
Thank you for joining our animal antics challenge at Fantasy Stampers.
Crafty hugs
Lesley

A brilliant card, with a fantastic sentiment. Thanks for joining us at Fantasy Stampers Caz DT.

Now that has brought a smile to my face. Love the cat stamp, the sentiment and the subtle background fishes, fabulous card x

Charlie — very handsome! Love how you coloured your cat in his honour. And definitely a perfect sentiment! Thanks for joining the fun at the Sisterhood of Snarky Stampers!

Oooh, Charlie was adorable! Love your card - what a great sentiment!

Great card Jane! Love the sassy cat image!
Thanks for joining the sisterhood of snarky stampers for our "K is for Kitties" challenge!!

That's a super stamp and I can certainly see the likeness.
Thanks for sharing with us at Fantasy Stampers. :)

Perfect sentiment for a cat. Thanks for joining us at Sisterhood of Snarky Sisters.

Charlie is a beautiful boy. Love the image and the sentiment is perfect. thanks for playing along with the Sisterhood of Snarky Stamper for the K is for Kitties challenge.

I've currently got a cat with "cattitude" and he must be the center of attention. The sentiment works perfectly here! Thanks for playing along with the Sisterhood of Snarky Stampers Kitties challenge!