There's a new challenge at Cardz 4 Guyz today, and this time the theme is Hope You Feel Better Soon. It can be pretty difficult to think of a get well card for a man - it's traditional to send flowers to people who are unwell, but floral cards tend to look rather feminine. So do pop over to the site and look what the DT has come up with for you - you might spot some ideas you would like to use for future cards of your own. And we'd love you to share YOUR ideas with us!

My first thought was of man-flu, but I wanted to make something that didn't have to just be used for flu .... what about those familiar black boxes of man-sized tissues?

For the outside of the card, I made a "medical case" from black card with a beige core, scoring a line all around the edge and sanding the whole thing to make it look aged. The corners are photo corners, the handle cut from a scrap of brown card and the "rivets" are tiny brads. The red cross symbol is made from a die cut circle topped with tiny strips of red card.

The glass is just a glass shaped snippet of white card covered partway with acetate to look as if it is half full of water. After sticking it to the card, I used a very fine black marker to draw a line around the sides and base, but not the top, to make it stand out a little from the white background. The two "pills" beside it, waiting to be taken, are Candi. I know most pills are white, but they wouldn't have shown up. And if I'd used blue Candi, my card might have suggested a completely different ailment! 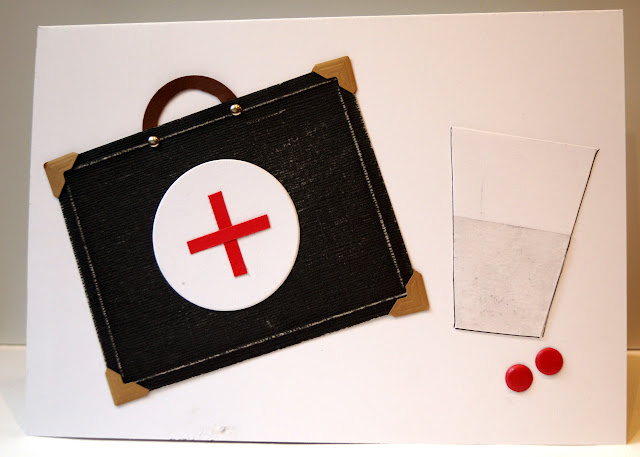 Now on to the inside. I cut a second piece of card, slightly smaller than the A4 sheet the outer card had been made from, and marked, scored and cut lines to give a tissue box shaped pop-up. I covered the box areas of the pop up with black card, then used wood grain paper on the base and a tiny Victorian wallpaper print paper on the upright panel, to suggest a bedside table beside a bedroom wall.

The "brand name" panel on the box is made by stencilling the letters onto a scrap of black card with a white gel pen. After preparing all the panels, I used a small oval die to cut the "top" of the tissue box, then cut down a real tissue to a suitable size (for a standard sized tissue, this worked out at about two-thirds the side length of the original) and pushed it through the opening so it is peeping out. I stuck it firmly to the underside of the box top, towards the front of the opening so there would be no gap showing when the card is open.

Then I carefully folded and burnished all the folds and stuck it into my outer card. 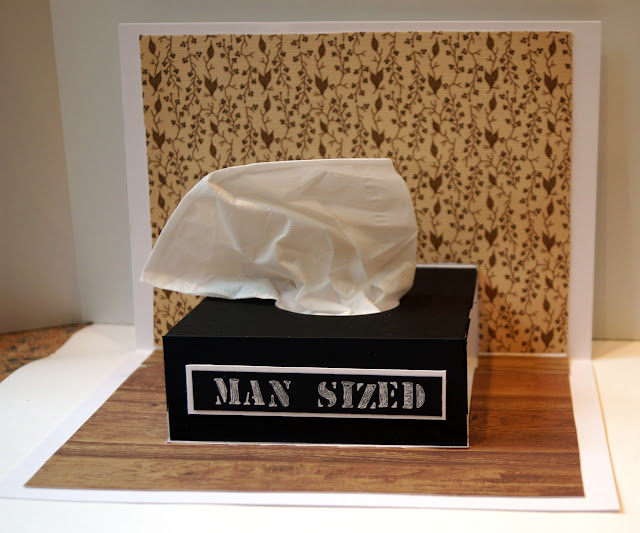 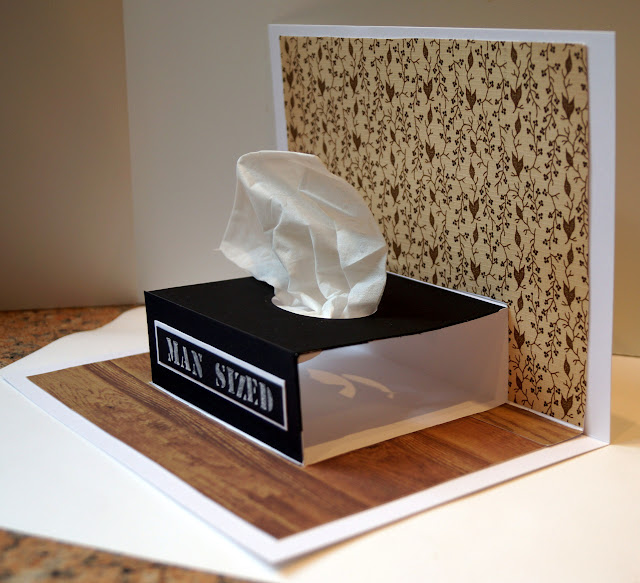 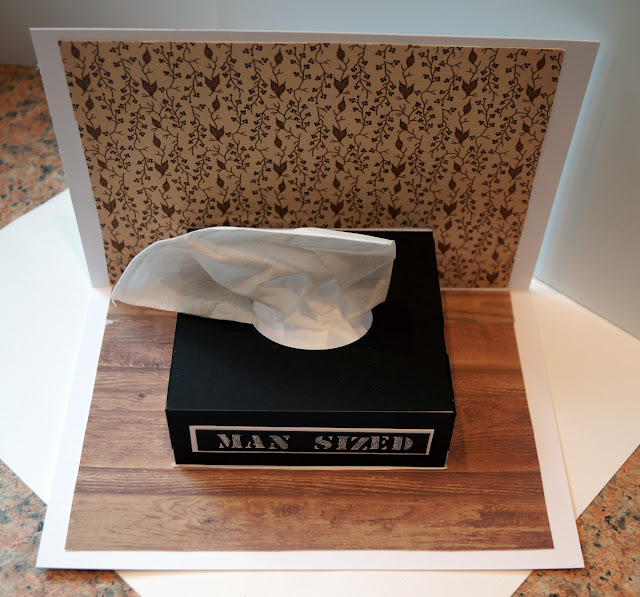 All the materials used were Very Old Stuff  and all but the wallpaper were snippets (the wallpaper was from a pad I've had for years and years and was still in it's wrapper - how naughty is that?)  so I am playing along with

Ohhh this is so clever. The attention to detail and the creativity is fabulous. Love how you've done the glass, the rivets in the case and the box of tissues inside, how clever are you? x Thank you for the inspiration x

Oh my word - this card is fantastic! Love the pop up box of tissues and how you decorated it - and way to go using up some older product. I love it! Thanks so much for sharing with us at Use Your Stuff this week!

WOW! What a clever design. Masculine get well cards are so difficult to make, but this one is amazing! xx

See ya Thursday night at the Playground's bonfire party - plenty of fun to be had.

Oh dear you are so clever
Big box of Tissue is an original Idea
I love the outside n the inside of your card Jane...
Genius card
See at my post today sweety
Hugs
Monika

Such a clever card Jane, love the idea of the tissue box! :)

Great project. Thanks for joining in with our anything goes challenge. Lisa DT Craft Rocket Challenges

Oh yes Jane - totally and utterly clever and really appropriate! You clever sausage! Ha, mind Sarn doesn't stick you on a stick over the bonfire I hear is planned for Thursday :) Parsnip really is a little snoop as well as a squealer :)

What a super design, Jane - I love the little faux tissue box inside - just perfect for the challenge.
Hugz, Jan xx

what a clever card Jane, love the tissue box

Such a clever idea, brilliant! Thanks for playing again at Craft Rocket, Claire DT x

What a clever card! Love it!

What an amazingly creative card...My heart goes pittar patter when I see a well executed Pop Up Card ....I love them . So happy I got to see it when Di featured you at her playground.
Do drop by my blog for a visit when you get time...I too love making Pop Up Cards though its been a while now
Cheers
Dr Sonia