The card that went wrong

It's ages since I shared one of my "cards that went wrong" because usually I find a way to rescue or recycle the failed attempt, but this one was beyond redemption, so I'm sharing it as well as the replacement card which, although it didn't go exactly according to plan, worked much better.

I'd seen a beautiful CAS card on Pinterest that had been made by watercolouring through an aperture, leaving it to dry and then overstamping in black. I decided to try to recreate the effect, using a circular aperture.

As I don't have any watercolour paints, I scribbled water based markers onto scrap acetate and then picked up the ink with a water brush and painted bands of colour through an oval mask onto my card.

However when I removed the mask, some of the ink had oozed under the edge of the card, making the edges messy. I thought that maybe I could rescue it by using the watercolour brush again to tease out the ink at the edges, removing the definition of the oval and making it just fade away. But by now the card was over-wet and started to pill and crumble on the surface.

Nevertheless I left it to dry and overstamped it, but the pilled and rather buckled surface wasn't good for stamping on and the image came out faint and patchy.

Here is the finished card, which actually looks much better in the photo than it does in real life. 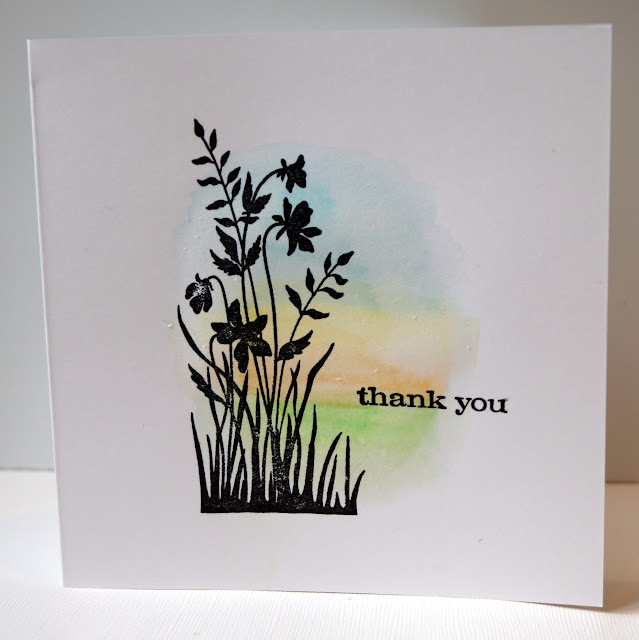 Seeing that the idea had potential, I went back to the drawing board and this  time created the background shape by scribbling the markers onto an acrylic block and spritzing it with water before using it like a stamp. This was MUCH more successful, although it gave me much bolder, brighter bands of colour than I had been setting out to achieve. I like the way the spritzing has created interesting blending patterns between some of the bands of colour.

Because the card wasn't over-wet this time, the surface stayed undamaged and accepted the stamping much better. 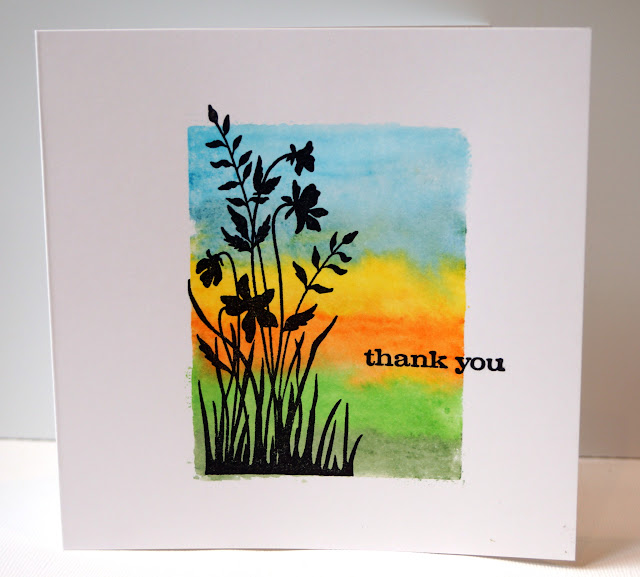 So there you are - I may not have rescued my original card, but I DID rescue the idea, even though it wasn't what I'd originally intended to do. Well, I think it is a beautiful card. Love the rainbow of colors! Thanks for joining us at Just Us Girls!

I like the colors you've layered for the background and the overstamped black is such a nice effect! Thanks for your honesty and showing your 'less than perfect' result! And, thanks for joining us this week at Just Us Girls! Welcome back, anytime!

Both cards are very pretty! I love the softness of the first one and the bold colors on the second! Thanks for playing with Just Us Girls!

Well done having another go. Sometimes the fail is enough to stop you trying all together, so I'm very happy you tried again. I think this is an amazing CAS card, the design caught my eyes straight away in the Gallery. Its really stunning and I'm so glad you shared it with us at ATSM this week!

I did not see the bad part at the first card it looks perfect with your beautiful black stamp...and the second one too awesome BG Jane...they are both sweet and beautiful made...great idea Jane to used what you have instead of buy new set of watercolor set..👍

You are a hero, and brave to show the mistake on your first card. Honestly, if you had not told me, I would not have know, as I think they both are very nice. I do see the difference with the second one, but the first is as sweet too. Thanks for playing with the Mod Squad this week.

Yep, I can't see anything wrong with the first attempt either. Both cards are gorgeous! Thanks for joining us at Just Us Girls!

I've done this exact same thing, Jane, and that's how I tried smooching for the first time! I love the bold "sunset" you ended up with and I can tell you it stands out a mile in the gallery at OLSC (in a good way!)!! Hugs, Darnell

That's what I call a learning experience, Jane. Your second card, though not what you imagined is lovely. I'm glad you shared it with us at ATSM this week.

gorgeous card with wonderful colour....thanks so much for playing along with the OLS this month.