You can't keep me away from dragonflies for very long!

Don't panic, I've not actually made four cards today, even though this is my fourth card of the day, I've made them over the course of the last few days but haven't had chance to photograph and write about them until today. So I have a bit of a backlog to clear!

A few days ago I spotted a new challenge called CAS Mix-Up, where entries need to be mixed media AND clean and simple - a very intriguing combination, as I always think of mixed media as being as far removed from CAS as a crafter can possibly get. The first challenge, for March, is stamping + watercolouring + a choice from their mixed media options list. 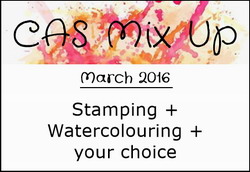 I chose stencilling from the list, and used a NBUS (Never Before Used Schtuff) brass stencil that I've had for many years along with NBUS Cosmic Shimmer Colour Cloud Blending Ink in Violet Haze (part of a lovely goodie bag I won on the Creative Expressions Facebook page recently) and sponged the ink through the stencil to create the motif. I also sponged the ink evenly over a slightly larger piece of paper to create a mat that matched it exactly.

The dragonfly is a Linda Luckin stamp (no longer available) which I coloured by scribbling several shades of blue and mauve watercolour pencil onto acetate and picking up the colour with a wet paintbrush, adding varying amounts of each colour until it matched the background, then using my custom-blended watercolour to paint the image. When it was dry, I covered the wings with clear Wink of Stella. 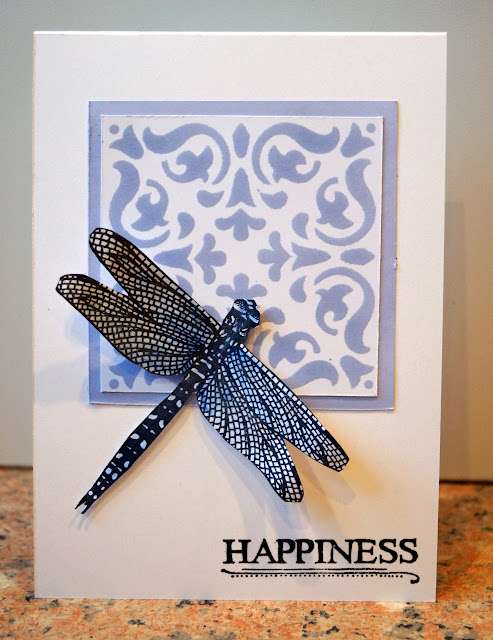 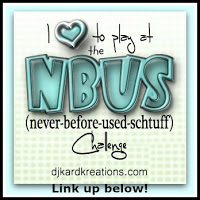 I forgot to mention that we are happy that you decided to link up with us at Mod Squad Challenge Blog.

Your dragonfly is so detailed, I love how it looks over your great stenciled piece!

Oh, this is so lovely Jane! Pretty stencilling and that dragonfly is fantastic! Have a very lovely weekend! Hazel xx
My Card Attic

Wow Jane what a fantastic dragonfly. The colour are beautiful and I love your stencilled background. Barbxx

Hi Jane. Your stenciled background is so pretty and makes a perfect backdrop to show off your gorgeous dragonfly. A little mixed media with a CAS design really makes it special. Great job! And thanks so much for joining us at CAS Mix Up!

This is beautiful Jane, such an elegant design and beautiful dragonfly.
Have a lovely weekend.
Pauline
x

Wow, Jane, I love this dragonfly! And it's a perfect match for the gorgeous stenciled background! What a perfect CAS Mix Up card!

As long as I was visiting, I scrolled through some fantastic posts I missed and came to your NBUS entry. I could have sworn I left a comment because I was so taken with the closeup of your beautiful dragonfly, but I don't see it. Haste makes waste and no doubt I wrote it out and then closed out without publishing it. I am just FULL of booboos, sigh!! Anyway, that's not why you called. I love, love, love this, Jane, and I really appreciate that you played in my NBUS Challenge #6!! Hugs, Darnell