The image I've used on this card is a pre-printed outline image from Craftwork cards, that has been sitting unloved in my Christmas Snippets box for years, for two reasons:

1. Polar bears and penguins are quite literally poles apart - polar bears live at the North Pole (well, in the general area of it) and penguins at the South Pole (ditto) and the two could never meet in the wild. So Christmas images showing both at once annoy me!
2. That penguin has such a blimmin miserable look on its face! How could I make a happy card with such a doleful penguin on it?

Anyway, both those reasons for not having used it are PERFECT reasons for pairing it with this fun sentiment, from a Dylusions sentiment stamp set. And my snippets box also contained half a sheet of mistletoe backing paper - serendipity!

I coloured the image with Promarkers, and you probably can't see it but I added Wink of Stella to the bear. The sparkly green braid also came from my Snippets box, and I finished it off with a scattering of snowflakes, I chose red, partly to match the red in the image and matting, but mainly because if a penguin and a polar bear can meet up in an ice cave, snowflakes can be red, right? 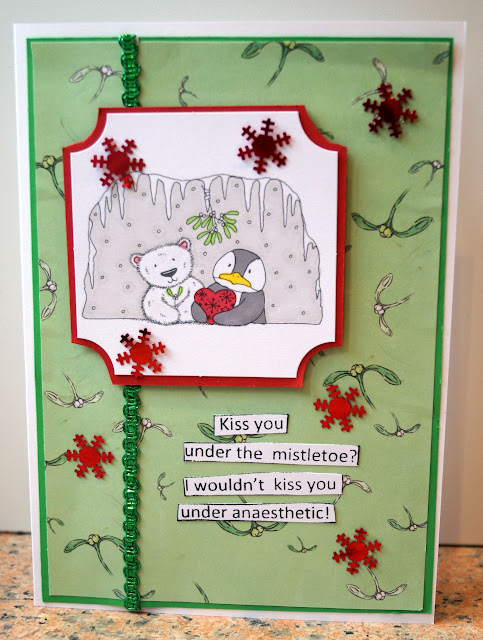 Oh Jane, this is hilarious! Really made me giggle here - it's a cracker! Ha, that was a pun and I didn't even see it coming :)

Lovely to see you in the Snippets Playground!

Genius pairing of the image and sentiment. The penguin really looks like he got something rubbish for Christmas! My old geography teacher always used to draw a penguin on top of the globe when drawing it on the blackboard and David Attenborough standing on the Equator! Cara x

I LOVE it!! That penguin's face just cracks me up! Thanks for joining us at 52CCT, April x

What a great card, thank you for joining us at Winter Wonderland Challenge for our ‘Penguins’ Challenge, hope to see you again. Emma DT x

They both have grumpy faces and I love the sentiment. You do make some super funny cards and often give me a laugh. I love your sense of humour Jane. Barbxx

Wonderful card. Thank you very much for joining our challenge at Winter Wonderland.
Hugs, Iwona

The bear and penguin are so expressive! Thanks for sharing your card with us at 52CCT.

LOL!!!! I think this is such a funny sentiment. Love the image you've used too! Thanks so much for playing along with 52CCT this week! Deborah, DT.

yaay too cute image and I love your nice DP...
I really love this cute Image Jane
happy and cherry card

What a fun sentiment. That penquin does look a little unhappy. Thanks for joining us at 52 CCT
Julie T