I'm not a film fan - it's 10 years since I last went to the cinema and probably almost as long since I watched a film on TV without getting bored and switching off after the first 10 minutes - I'd rather read a story in a book than watch it on a screen - so I was really REALLY challenged by this month's Naughty or Nice Challenge, which is At The Movies

However I printed out this Wrinklies recreation of the famous scene from Ghost decoupage from the CD "The best of La Pashe 2014" - and then spent a week wondering what the heck to do with it.

While picking out a paper for another project, I realised an old K & Company 12 x 12 pad had a sheet with a vintage movie theme, and at last things started to come together. 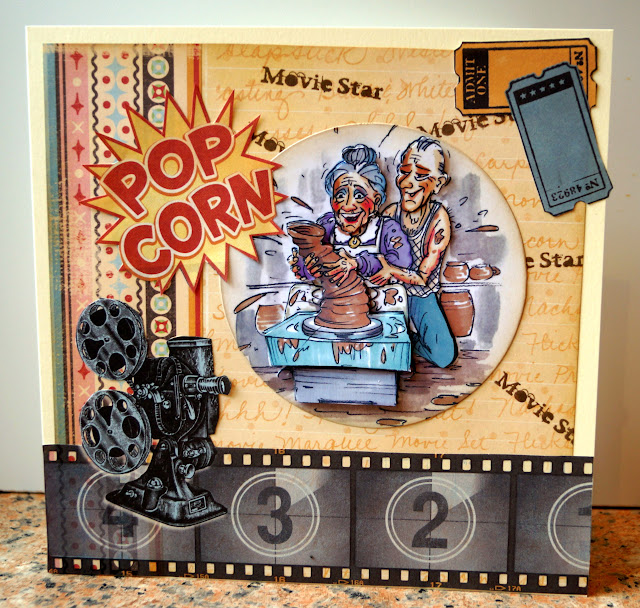 I used a 20cm square card. The background is a square of the paper, overstamped with the words "Movie star" at random. I fussy-cut the projector, film, tickets and popcorn sign from the paper and used them to finish the card once the decoupage was in place.

Whether this is naughty or nice depends on a couple of things - whether or not you see any symbolism in that pillar of clay drooping over like that, and whether, when watching the original film, you found That Scene rather *ahem* stimulating, or you couldn't really see it properly through your tears.

Brilliant card, love the way you tied together the cartoon style and the realistic style of the projector, it works so well. Cara x

So funny Jane - you really are a bit of a scallywag I'm learning! To be honest, I cried - loved Patrick Swayze :( It's a super-fun card you made!

This is such a funny image. Great card and love the Pop Corn. A really special card and I loved that film. Barbxx

What a great card - really made me smile! I love all the different elements and how you tied them altogether so beautifully! Thanks so much for playing along with us at Naughty or Nice Challenges this month, Jo x

A super card Jane, such a fun image and fabulous details.
Pauline
x

Suggestive? That image? I have no idea what you are talking about. :P Those are just two people REALLY ENJOYING being pottery artists. This is an absolutely brilliant card. Thanks for joining us at Naughty or Nice Challenges!

So no we know what Demi and Patrick would have looked like all these years later! What a fantastic card!!! The image is awesome! Hats off to you!

Hiyaaa I know Demi Moore and Patrick Swayze on this scene hihi
this is a cute Image
and how cool so many things from film is here on your card
your card is a winner card
believe me Jane
this is awesome!!