The stamp I've used for this is a very large Docrafts one that I won in a magazine giveaway a few years ago, and I think I've only used it twice, in fact it only just survived my big clear-out earlier this year. It just doesn't seem to be very versatile to me, an issue I often have with big stamps (or big toppers, big stencils, big die cuts, big patterns on paper....).

However today I decided to devote a bit of time to colouring it in more carefully than I have before, blending Promarkers to give shape and texture to the tablecloth and the curtains in the window behind, and add shadow and depth to the building, hedge and floor. That hedge really IS green, despite looking yellow on the photo. It isn't lack of phosphorous, or whatever it is that makes plants turn yellow, it's the Lime Green Promarker which is one of the least photogenic colours around!

Then of course I had to rummage through all my snippets to find suitable cards for the layering. I really should have picked the layering colours first, and THEN chosen the colours for the image. What a good thing I have a lot (and I mean a LOT) of snippets!

I was tempted to add a snarky sentiment, as those two ladies look as if they could be playing a game of one-upmanship with each other, but it didn't look right so I changed it to a simple thank you - after all, if somebody had taken me out for a sumptuous tea like that, I'd be sure to send them a thank you card! 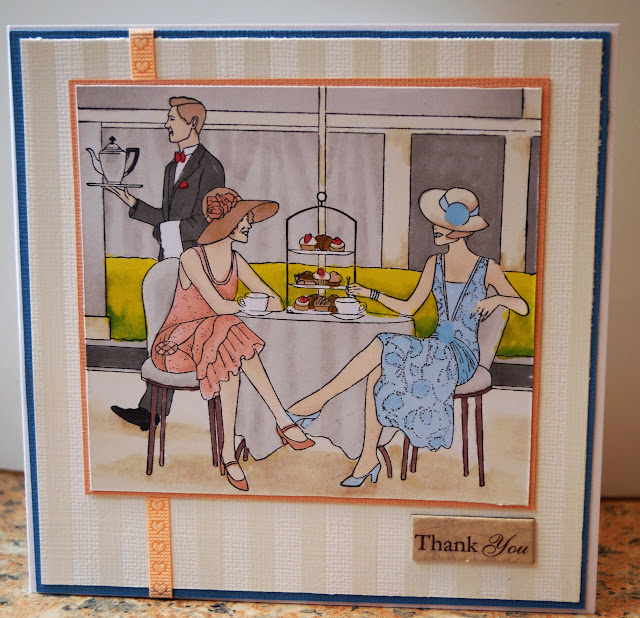 Stunning card Jane - and your colouring is pretty amazing! Great to see you in the Playground!

You've used twice more than me Jane! Still not got around to using mine as you say it is a large stamp but your colouring has really brought it to life - it looks fab.

I know just what you mean about large stamps, but you have done a great job with this one Jane!

They are two elegant ladies Jane. That certainly is a big stamp and I love what you've done with it. Barbxx

Love your colouring in of this scene, fabulous. Those ladies definitely look like they're dishing the dirt on something! Cara x

Thats an elegant high tea!
Thanks for joining our challenges at Cardz 4 Galz!

Wow Jane, Loving the card, I remember when these stamps came out, I wish I had bought them. I love the era depicted, wonderful colouring. Thanks for playing along with us at Cardz 4 Galz. Caz DT.

Great card. Thanks for joining us at Sweet Stampin'
Cass xx

Great card. Thanks for joining us at Sweet Stampin'
Cass xx

Thanks for sharing at Sweet Stampin'.