This weekend is the Monaco Grand Prix, when cars whizz around the complex circuit around the streets at a breathtaking pace. But what if the Grand Prix was run by snails instead of racing cars? Here we see those great classic snail racers, Reubins Barishello, Michael Shellmacher and Nigel Manshell racing for the chequered flag. And what fuel are they using? Why, Shell of course! 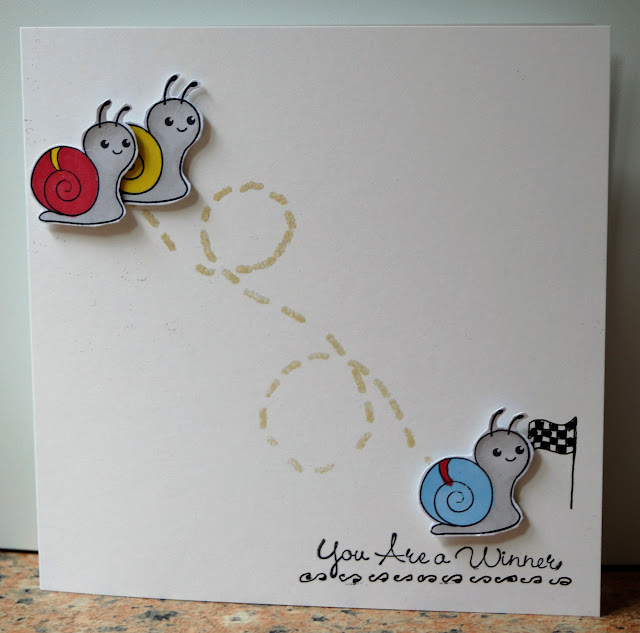 The snails are stamped with a Clearly Besotted stamp - I think the set is called "Cute as a bug", and the sentiment is an unmounted stamp I bought on ebay. I doodled in the trail using a Versamark pen, then embossed it with a gold-tinted hologram powder, which gives it a very realistic "snail trail" look when it moves around in the light. I hand drew the chequered flag, and doodled in the scrolls under the sentiment to cover a blob of ink for emphasis.

CASology - Fast
Crafty Creations Challenges - Doodles Details
The Male Room - Critters and/or Bugs
Less is More - Sketch (well,   I was sticking pretty closely to the sketch - until I fiddled about with the snail images and decided it looked more balanced with one a long way ahead of the others!

What great imagination and I always enjoy your humour Jane. Your card is great fun and a clever way to do the snail trail. Barbxx

I adore these cute snails - so cute. Thanks so much for joining us this time at the Crafty Creations Challenge, Elizabeth (DT)

Drew your chequered flag and the scrolls ...clever you
this card is cuuuteee
I love your idea
I try to catching up Jane
hope you like my comment (SMILE)
hugs
Monika

I love the humour in this card! Great take on the sketch and a lovely make :)

A clever, fun and cute take on this week's sketch Jane and a superb sentiment too.
thanks for playing along at Less is More this week. Sarah

I like the way you think, Jane!! That was a fun race! Here we have the Indy 500 and on the Tuesday after, I understand that the winners and runners-up of your shell game will be taking over the track to start their American tour!! Enjoy your day!! Hugs, Darnell

What a terrific interpretation of the sketch Jane and your snails are such fun too!
Thanks so much
Chrissie
"Less is More"

Aw, this is so cute! I love your snail Grand Prix...I imagine it takes a while for them to complete one lap! Your hand-drawn checkered flag, trail and scrolls are too cute! Thanks for joining in the FAST fun at CASology!

This is just too adorable! Love the snail competitors and that fun slime trail!
Thanks so much for joining us over at CASology! :)

What a creative take on the sketch! Love it! Thanks for sharing at Less is More!

Fabulous interpretation of the sketch and a great use of your snails with that sentiment.
Thanks for sharing with us.
Anita x
Less is More

Genius! Those snails are too cute. Cara x

I did have a giggle when I read your post. Fun card, beautifully done. Thanks for sharing in TMR
Louise c

OMG what a sweet card! LOVE your take on the LIM sketch challenge!

Fabulous! I really like your take on the challenge - the snails are, strangely, cute! Sorry to be so late commenting, but thanks so much for playing along with our Critters challenge at The Male Room! Deborah, DT.