Recent rummaging through my stash turned up a pack of A4 acetate sheets that I'd forgotten I owned, and a huge medallion stamp that I've had for around 10 years and never used.  I've put the two together in this card.

For the outer card, I scored and folded the acetate (remembering to peel off the protective coating - I remember, now, that the reason the acetate pack had been set aside was that I'd thought it was a duff batch, being rather cloudy looking - I'd not realised there was protective film on both sides!) and then used a black Stazon pad to stamp the medallion around the edges and to ink the edges of the acetate.

Then I used orange card to make a slightly smaller card for the inside, stamping the medallion again but this time using a Versamark pad to give a watermark effect. Then I stamped "Thank you" over the image, using an old Hot Off The Press stamp.

The orange card is just stuck to the back panel of the acetate, although the static in it makes it appear to be stuck to the front too. It's much easier for opening and closing than if it is stuck down front and back. I've put a white panel inside the orange card, to write in, and also covered the acetate behind the card with white, to hide the adhesive. 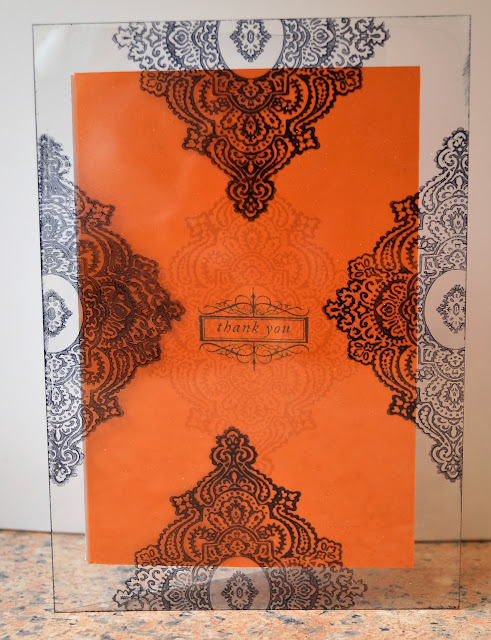 I am sharing this with:

Great stamping Jane. I hate stamping on acetate. Have had to use my stazon stamp cleaner many times! Barbxx

This is such a cool design, Jane! Your stamping on the acetate looks AMAZING! Thank you for joining us at House of Cards! HUGS! :) Mynn xx

Lovely design, Jane. Love the acetate. Thanks for joining in the challenge at Mod Squad Challenge.

Love this, Jane. Thanks for joining us at House of Cards this month. We hope to see you again soon.

Very stylish!!
Thanks for joining us at House of Cards.
Rosi x HOC-DT

Love the patern.
Thank you for sharing your project with all of us at House of Cards May challange 'Clear papers'