I was quite excited when I saw that the latest challenge at The Male Room is Science, because I'm a former scientist myself and still have a love for all things scientific. Even so, I found it quite hard to come up with an idea for a card because I don't really have anything suitable in my stash, apart from steampunky stuff that I wasn't in the mood to play with.

Then I remembered a sheet of NBUS peel offs that have been gathering dust for about 20 years. They are similar to the Spirograph designs I used to love making as a kid, and one of them reminds me very much of the old planetary-model diagrams of atoms. 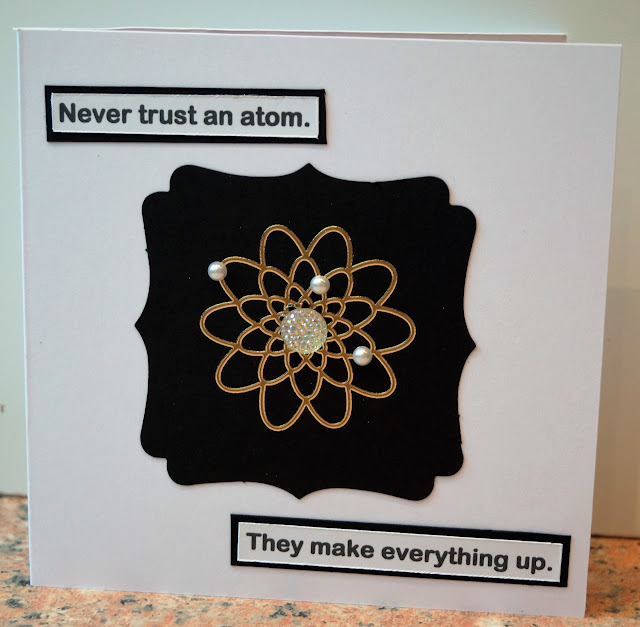 I added pearls for electrons, orbiting around a nucleus made of a gem that is composed of lots of tiny spheres - like a cluster of protons and neutrons. The sentiment is computer generated. Well, it may not be an accurate quantum mechanical portrayal of an atom but I think it pretty well sums up what we all think of as one!
Posted by Jane Willis at 13:55

LOL!! I think that's fantastic! A really fun take on the theme. Thanks so much for playing along with The Male Room this week! Deborah, DT.

I love your sentiment, very clever!!! And your electron pearls - brilliant!!!

Couldn't be better, a GREAT card for the challenge,pretty AND fun too. Thank you for joining us at The Male Room Science Challenge. Faith DT

Very clever way of coming up with an atomic type image :) Love your card with the joke.