This is my version of the first dish I ever learned to cook, from a recipe in a children's annual in the 1960s. I didn't know then that "Hubble Bubble" is a traditional British dish, after all, it isn't one you hear mentioned very often. I think it must be the kind of thing that would be served up for breakfast in stately homes. The traditional version doesn't include cheese but I like it - this is my own version that I've evolved over the last forty-odd years. It's cheap and warming, perfect for this time of year. 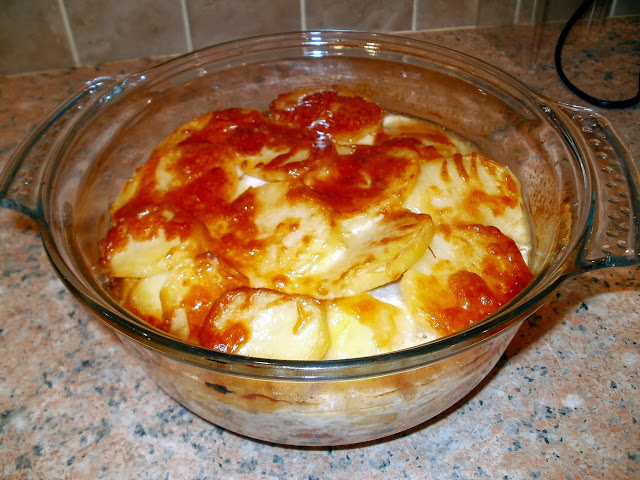 Set oven to 180C, gas 4. Peel and thickly slice the potatoes and drop into a pan of boiling water. Cook for 5 minutes then drain and set aside.

Cut each sausage into 4 pieces and the bacon into strips about 1cm wide. Place in a cold non-stick frying pan and heat gently until the fat runs out. Add the onion and increase the heat. Fry, stirring frequently, until the onions are softened and the sausages browned.

Beat together the eggs, milk and seasoning.

Arrange half the potato slices in the base of a greased ovenproof dish,  put the bacon, sausage and onion mixture on top and top with the remaining potatoes. Pour the egg and milk mixture evenly over and scatter the grated cheese on top.

Bake in the preheated oven for around 45 minutes, covering with a lid or foil if the cheese looks as if it is browning too fast.

Good served with baked tomatoes and a green vegetable, 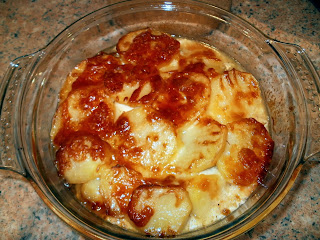 I am joining in with Credit Crunch Munch, hosted this month at Dinner With Crayons  thanks to Fuss Free Flavours and Fab Food 4 All

Ooh yes, just my kind of winter warming food - thank you for linking up with Credit Crunch Munch:-)

I can't believe I'd never heard of this, it sounds great! Thanks for taking part in CCM!