Well, it was lovely to get crafting again yesterday, but things didn't all go according to plan. Fist of all, I opened a bottle of Starlight paint and found that I'd not screwed the cap on tightly enough, so there was a crusted skin over the top of the paint and I had to chip it away before I could use it. I ended up absolutely covered in paint - and doesn't it go a long way?

Then I wanted to make an enamelled embellishment for a card, using ultra thick embossing enamel.  I did everything as usual, and finished off the very last of my green UTEE, but used a stamp I'd not used before, and after it had cooled I tried to remove the stamp.... and instead, the enamel came free from the base card, leaving the motif embedded in the stamp. It took me about an hour of careful picking to extract all the bits from the stamp, and none of the bits were usable. I think the stamp is going to be OK but I still don't know what went wrong - could it simply be that I'd used a grey rubber stamp instead of a red rubber one? Is the grey rubber somehow different from the red in the way it behaves? Or had my (admittedly rather old) UTEE gone off?

So all in all I was feeling rather grouchy. Oscar the Grouch-y! Yep, I cheered myself up by rummaging through my snippets box and having a really good play around, and came up with this: 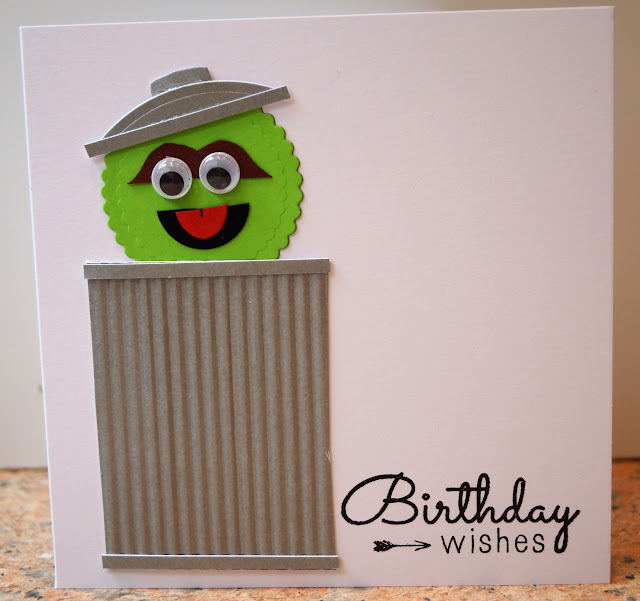 Yes, it's my tribute to Oscar the Grouch, the bad-tempered dustbin dweller from Sesame Street. His head is a die cut scalloped circle, with hand cut eyebrows, googly eyes, and a mouth made by cutting the smallest circle and oval from my Nesties in black and red, sticking them together and cutting in half.

For the bin I cut a rectangle of silver pearl card and put it though the Ribbler, then edged it top and bottom with narrow smooth strips. The lid is a sliver from the edge of a die cut circle, also edged with a narrow strip and with a hand cut handle added. Finally, I stamped a sentiment - I did consider adding one of my snarkier Dylusions sentiment, but I thought this would be a fun card for a child and they might not appreciate the snark!

As this is made entirely from snippets, naturally I'm going to head straight to the Snippets Playground.

I'm also sharing this with Sweet Stampin - Humour : I know the only stamping is the sentiment, but Oscar always makes me laugh!
And with Addicted to CAS - Grunge.  I'm sure this isn't the kind of grunge that Jaydee was thinking of when she set the challenge, it was the grunge style, but what could be grungier than a dustbin? So I've taken a sideways look at the challenge prompt!

Really fun. Sorry to hear that there were a few disasters along the way - very frustrating when that happens but a lovely card has come out of it!
Jocelyn x

Great fun Jane! When I saw the dustbin I thought what company would have had the idea to make a dustbin die - not many sales to be had there. I couldn't believe you'd made it yourself - brilliant!

If being grouchy leads to this kind of marvelous result, then you should be grouchy every day, Jane! Love Oscar and I may have to CASE this one for a little 3 year old who is having a birthday in a couple of months. He thinks Oscar is the most marvelous creature ever. :-D

It sounds like a bit of a disastrous day Jane but you still managed to create a super card.
Pauline - Crafting with Cotnob
x

What a fun card, Jane, brilliant design. Sorry to hear about your crafty disasters....and yes, paint does go a long way! xx

Really love this fun card Jane! A great result - after those disasters. I've never used UTEE so have no idea about whether it can go 'off' or not - probably does have some sort of shelf life though.

Rain forecast for later - I bet Mark would be happy!

Oh what a palaver you had! I usually cover my stamp in versamark before using UTEE on it to help release it. No idea if I need to do this or not, just habit! I love your card, just genius and yip a stamped sentiment is perfect for our Sweet Stampin challenge. Cara x

I think this card is adorable and love how you used the word "grunge" for Oscar!! Talk about thinking outside the box. Love it!

What a fun card, Jane. And such a clever one too. You've made a brilliant use of snippets to create Oscar who is bound to make everyone smile. Elizabeth xx

Super fun card. Made me smile. Thanks for joining us at Sweet Stampin'
Cass xx

Back with my DT hat on, this card certainly made me smile! Thanks for joining us this week at Sweet Stampin'. Cara DT x

Cute and fun card. Thanks for joining us at ATCAS!!