When I saw that this month's challenge at Country View Crafts is Rust, I didn't think I would be able to join in as I have nothing to create a rust effect with.

But then I thought, what is verdigris but "rusty" copper? So I've gone down the rusty copper route rather than the rusty iron one. 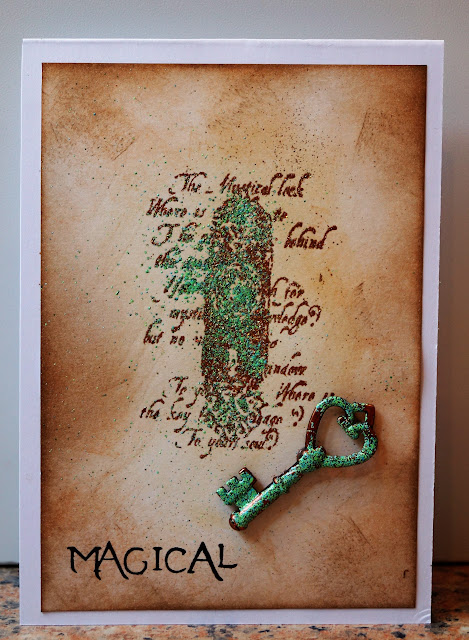 The stamps I have used are from a set that came from the long-defunct Stampbug Club. I stamped the image then heat embossed it with copper e.p. then while the embossing was still hot, sprinkled on some pinches of verdigris e.p. and heated again.

I coated the metal key with copper Alchemy Wax, then lightly brushed over the surface with a Versamark pen and embossed that with the verdigris too.
Posted by Jane Willis at 14:53

Great idea and it looks lovely.

Absolutely stunning, Jane, and the most fabulous idea for "rusty" things! :-D

That's definitely thinking outside if the box, once you've unlocked it obviously! Fab card. Cara x

This is fabulous, I love these colours together, and the 'magical' really sets it off. Thank you so much for playing along with us at Country View Crafts. Sue xx

Your card is beautiful! I love, how you interpreted the theme rust! The verdigris EP is a brilliant idea and looks fab! Thank you for joining our challenge over at Country View Challenges this month! Evelyn xx