A CAS DL card for a change

Isn't it odd how you may have a vague idea of what you want to make for a challenge and then another challenge comes along and as soon as you see it, you know how you want to interpret the first. That's what happened with this card. 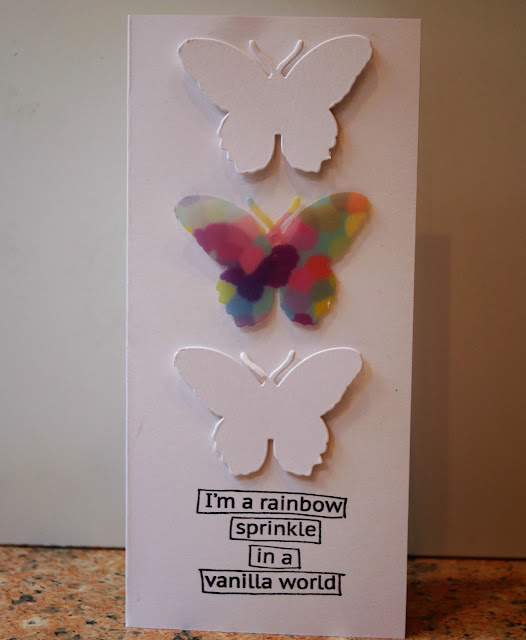 I'd already seen that the theme for CAS-ology was Odd  and had decided I simply HAD to use this Dylusions sentiment, but then along came the Butterfly Challenge where the theme is Vertical and/or Damson and immediately my vague idea gelled into a certainty.

We hardly ever make DL shaped cards in a CAS style, do we? And yet they can be very striking. Must make a note to myself to do it more often. The die I've used is the old familiar Cuttlebug Butterfly, and for the middle one I used an old scrap of parchment. It is very thin, so rather than use a shim I folded it double, only really expecting the top layer to cut. Both layers cut beautifully so now I have another rainbow-spotted butterfly to use on another project. Two for the price of one - bargain!
Posted by Jane Willis at 09:04

Very pretty! Love the pop of color from the middle butterfly! ♥

Well goodness me, so glad to have been of help and what a striking reusult your card is. I love the idea . Thank you for fluttering into the garden . Hugs Mrs A.

Fun and funny and profound! And let's not forget beautiful, too! I love this, Jane!! Hugs, Darnell

Gorgeous card, Jane. Very clever design for the challenges. I rarely think to make a DL card, I'm not sure why, because as you've shown they can be very striking. xx

Yep, that Dylusions sentiment is perfect for the CASology challenge this week! Love it paired with the butterflies! THanks so much for joining us at CASology this week!

A perfect CAS card, love the sentiment too x

A perfect sentiment for this challenge, Jane, and I love that gorgeous butterfly! Thanks for playing along with CASology this week!

Such a perfect take on the cue and so pretty! Thanks so much for sharing with us at CASology!! Anna xo

Love your sentiment paired with the colourful butterfly. Great take on the cue word. So happy you could join in the fun at CASology this week.