Potato croquettes - without getting in a mess! #CreditCrunchMunch

Do you remember potato croquettes? Those bright orange cork shapes so beloved of the 1970s Mother because she could whip them out of the freezer and into the frying pan and have them on your plate within minutes of you getting home from school? Oddly enough, when I was at university, both my college and the OTC I attended thought they were dead posh, and used to serve them, alongside a couple of sprigs of frozen broccoli, at every formal dinner. How times have changed!

Anyway, I found myself with a bowl of leftover mash in the fridge yesterday, and as a mash lover I didn't want to throw it away. I usually make it into potato cakes, but already had some of those in the freezer. But I've been tidying up my store cupboard and knew there was about a quarter pack of panko breadcrumbs in there, so I decided to try making some croquettes. 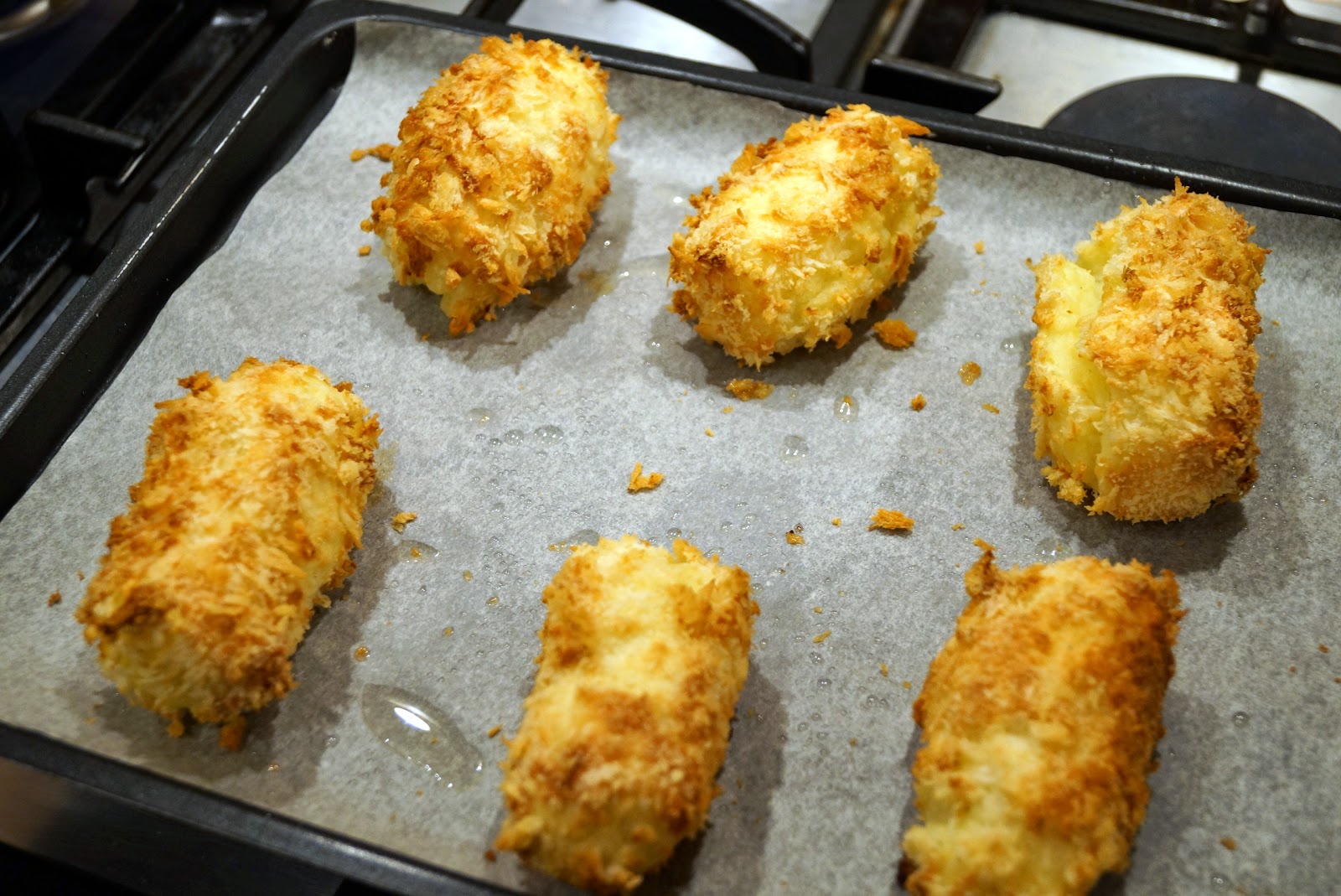 I'm not going to give quantities here, because it's essentially a "using stuff up" idea so just use what's to hand.

Mashed potato - it needs to be quite dry, if it has loads of butter and milk in it and is a bit sloppy, use it for something else like potato cakes!
Beaten egg - depends on how many croquettes you are making. I happened to have an egg white in the fridge which I beat with 1 whole egg and that was plenty for 6 croquettes and could probably have been eked out to a couple more. Don't start with too much, you can always beat up more later (as long as you have some eggs!) TIP - if your yolk doesn't want to coalesce with the white, add a pinch of salt and it will mix up much faster.
Dry breadcrumbs - I happened to have panko but the ordinary ones or even the bright orange ones would do, depending on what you have.
Cooking spray (or fat for frying)

Break off pieces of the mash and shape in your hands to cylinders about the length of your thumb and slightly thicker than it. Arrange them spaced well apart on a plate.

Repeat until all the croquettes are crumbed, giving them a second coat of egg and breadcrumbs if you have enough. Now, you have one eggy hand and one bready hand instead of two hands covered in a sticky claggy mess of both! It means you've wasted far less of the coating, and your hands will be much easier to wash.

The traditional way to cook the croquettes is to shallow or deep fry them, but I find that as well as absorbing lots of fat, they tend to split and spit, so I prefer to spray them with cooking spray (I used a light olive oil spray) and then bake them in a fairly hot (180 C) oven for about 30 minutes, especially if the oven is on for something else anyway. 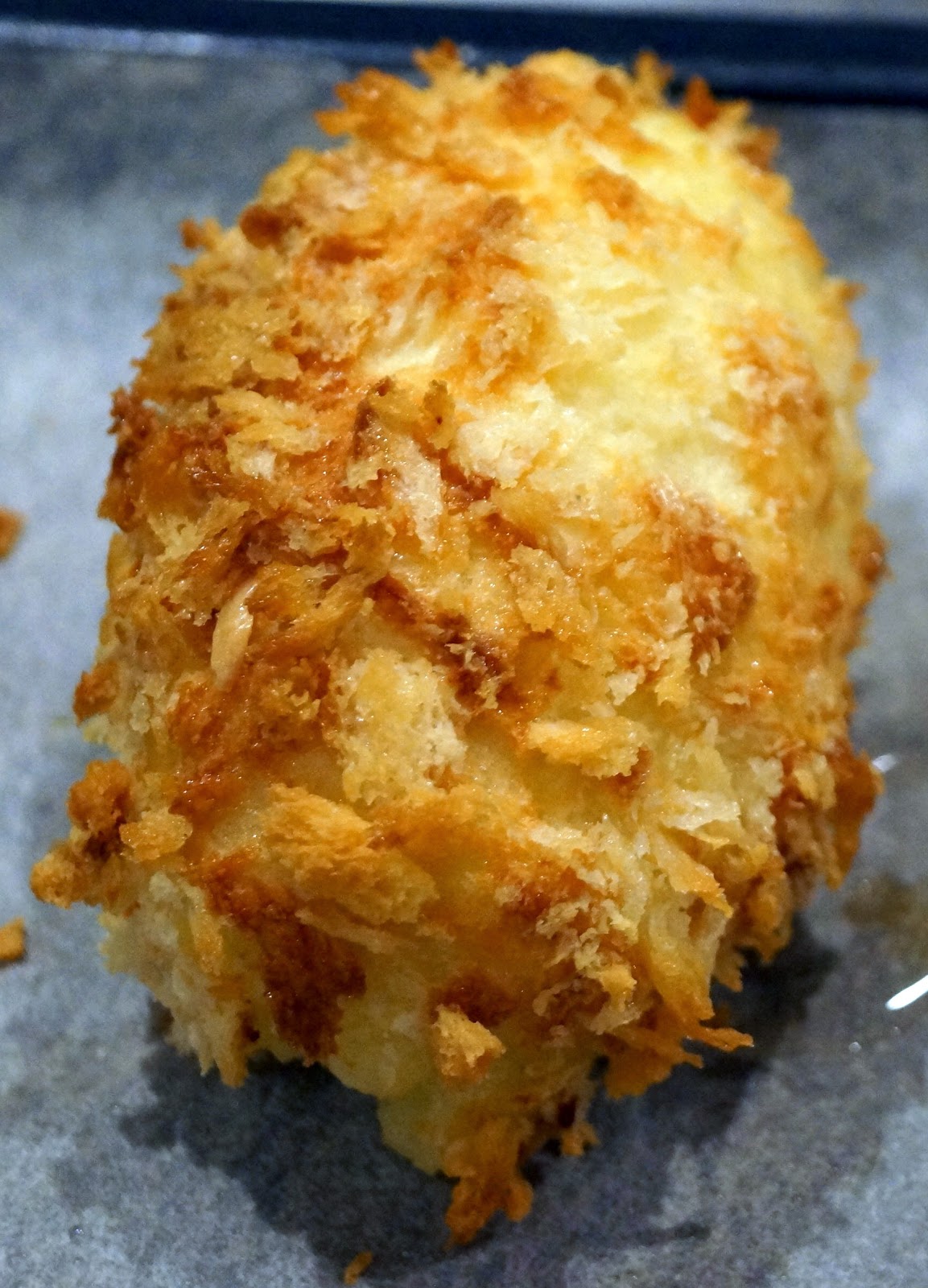 You can see more great money saving recipe ideas in the blog hop linky below:

How I love all your retro memories Jane and your Potato Croquettes look totally lush - bring them back into fashion I say:-) Thanks for a super thrifty entry to #CreditCrunchMunch!

lovely croquetttes and very clear instructions. I always end up using the wrong hand and then have to wash and start again.

thank you for sending to Credit Crunch Munch.

this is a great recipe. top marks, Thanks for sharing.