What do I do with all this vellum?

Some years ago, a friend announced that he had a whole pile of patterned vellum that he couldn't think of a use for, and offered it free to some of his friends. Craft stuff without a use? How could that possibly be? So I offered to take some of it off his hands. And since then I've had about 50 sheets of patterned vellum, looking reproachfully at me every time I open my paper drawer.

I can see that plain or simply coloured vellum is great for parchment crafters, of which I'm not one, but what the blanket blank do you do with patterned vellum? The only thing I can think of is to stick it to white card - in which case you might as well have used patterned card in the first place. And what's more the adhesive tends to show through unless, like this, the pattern is strong enough to conceal it.

Anyway, I was having a play around with my foils from Foil Play - I applied Stik It diecutting adhesive to some cream card and then cut these sprigs, then used the reverse, adhesive-covered side to apply the foil. And one of the sheets of vellum happened to co-ordinate well with the foil, so it got used at last. One down, forty-nine to go.....

As is so often the case with foiling, the photo doesn't do it justice - what you need to do is look at the very lowest few leaves, at the tip of the bottom sprig, and then squint and imagine it all looks like that - which it does in real life!

The frame around the words was from a magazine's cover mounted sheet that I've had since last year, still unopened. I stamped it with Versacolor ink and embossed it with clear powder.

And a quick word about the backing papers. I joined a local selling group on Faceache, and somebody was selling 40 sheets of coloured card for £1. Bargain, I thought, drove over and collected them, nicely sealed in a bag. Got home and found that only the front and back sheets were card, in between, where I'd not been able to see, it was all rather flimsy paper. It wasn't worth going back and creating a fuss for £1, but that was my first and LAST experience with a group of that kind. 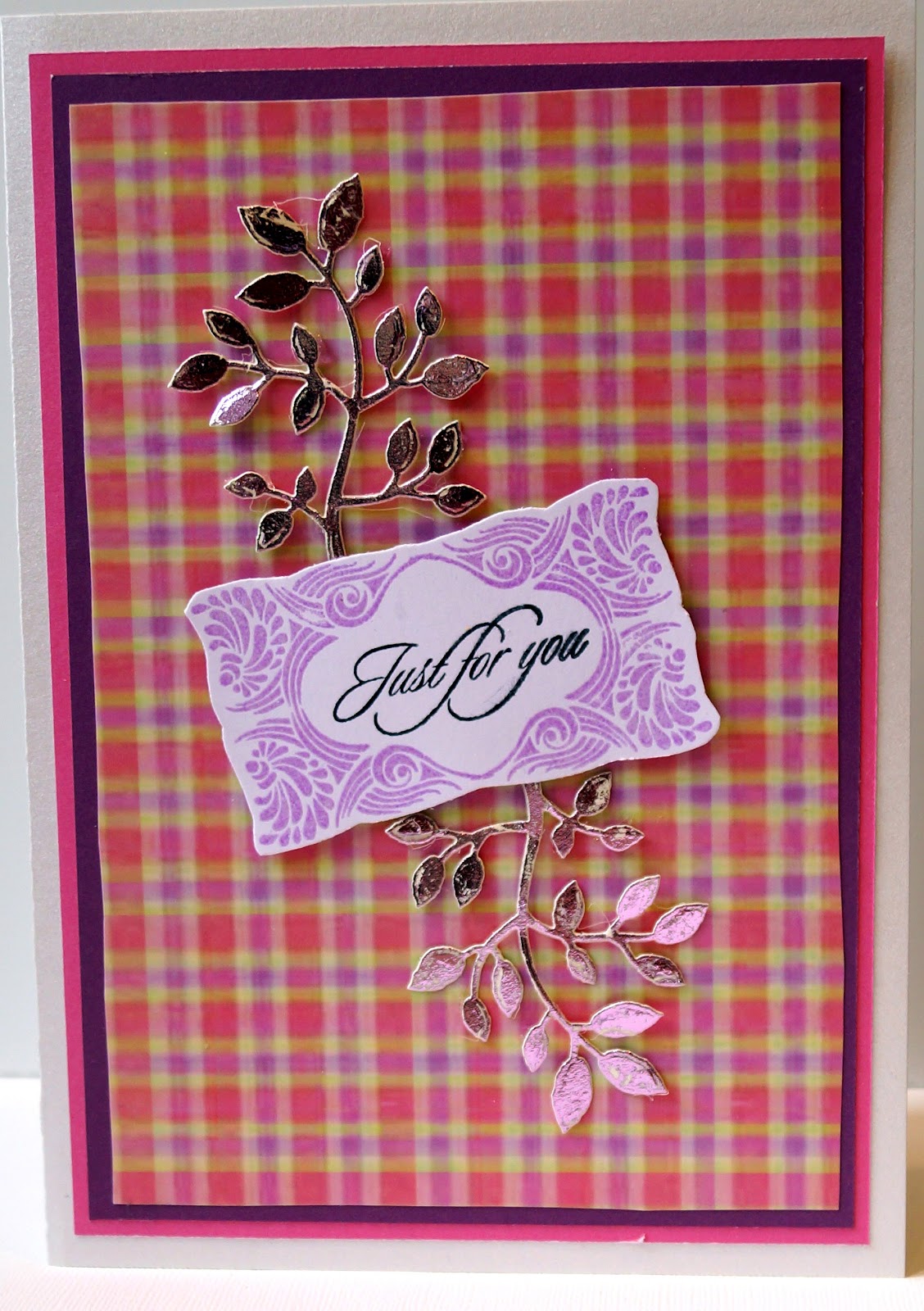 As the vellum, stamp and papers were all seeing action for the first time in their lives, I'm playing along with NBUS at DJ Kard Kreations

Beautiful, Jane - I like foiling die cuts too, that's a particularly delicate & pretty one :) Great too that you used three items of NBUS!

You could use double sided adhesive sheet to adhere the more 'sheer' patterned vellum to card stock, by covering the whole of the piece of vellum you're using with it. Joanna Sheen is always a good place for that - http://www.joannasheen.com/craft-supplies/glues-and-sticky-things/other-sticky-things/woodware-miracle-adhesive-film/. The 'blurb' actually says for vellum :) Free postage over £10 - they also stock the Stick-It sheets for die cuts.

What a swizz about the card stock/paper pack you bought! As you say, not worth going back but what a mean trick :(

Len just came home from archery and says it's freezing out there! Supermarket trip for me later - maybe!!

I used spray adhesive this time. Somewhere in the depths of my stuff, I'm pretty sure I have a pack of sheets of invisidots for vellum, but goodness knows where they are!
It's bitterly cold today isn't it? Mark is keen to get things under way in the garden, but he keeps popping out for a few minutes them coming in to warm up so he's not making very rapid progress
Jane

Your card is lovely, Jane. The foil dies and patterned vellum are fabulous together. Nice use of all the NBUS :-)

OH! I, too, have a drawer FULL of patterned vellum! Fabulous idea!! Thanks!! xoxo Christi

I think your patterned vellum is really pretty, Jane, but I am more smitten by your gorgeous foil leaves! The whole design is bright and fabulous! I think what the person did putting the flimsy paper in between the card is outrageous. Really, no conscience at all in some people! Thank you for playing in my NBUS Challenge #4!! I'm happy that you brought all the elements into the daylight and gave them some love! Enjoy your Sunday and I hope it warms up!! Hugs, Darnell