When I was in my teens, I used to belong to a youth club that was part of the Methodist church. The symbol of the national organisation it belonged to, the Methodist Association of Youth Clubs, was a golden shell with the letters MAYC written in green, and that's always the first thing that springs to mind when I hear the phrase "Green and Gold".

So it made it quite hard for me to turn my thoughts away from seashells when I saw that the new challenge at Less is More is Green & Gold. However there's a distinct autumnal nip in the air, which makes me think of falling leaves, which are really far better suited to the colour combo!

I had a dig through my snippets box and used a leaf punch, one that also embosses veins, to make the leaves. I was lucky enough to find a tiny snippet of the same green that was already backed with Stick-It, exactly the right size to cut my sentiment from. So, a 100% snippets card, perfect for the Snippets Playground this week!

I used my Hougie board to score the lines, positioning them by lightly scoring them with the right side up so I could be sure they were in exactly the right place, then turning over and re-scoring the lines more heavily.

What with scoring and gold mirri, it was a right bar steward to get a decent photo! I've tried in all kinds of lighting, with the card standing up and with it lying flat, but out of a HUGE number of attempted shots, these two are the best I could manage. If you squint really, really hard you can faintly see the two scored lines running diagonally above the leaves. You'll just have to use your imagination to picture how it actually looks, with a pair of lines below them as well! 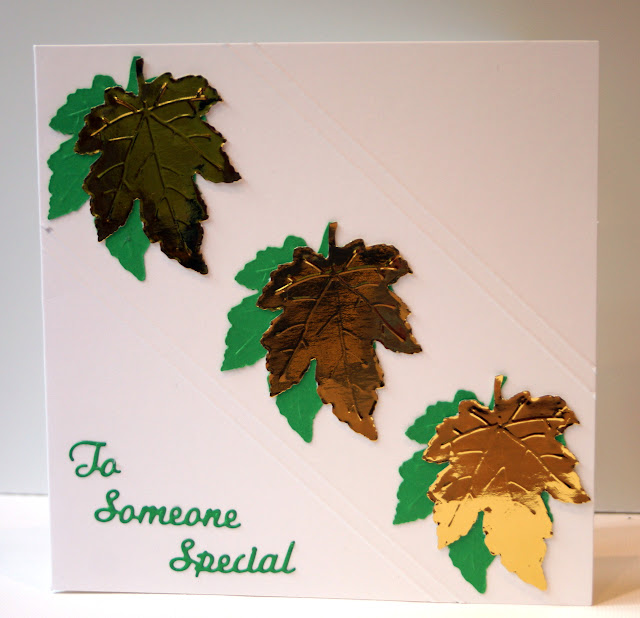 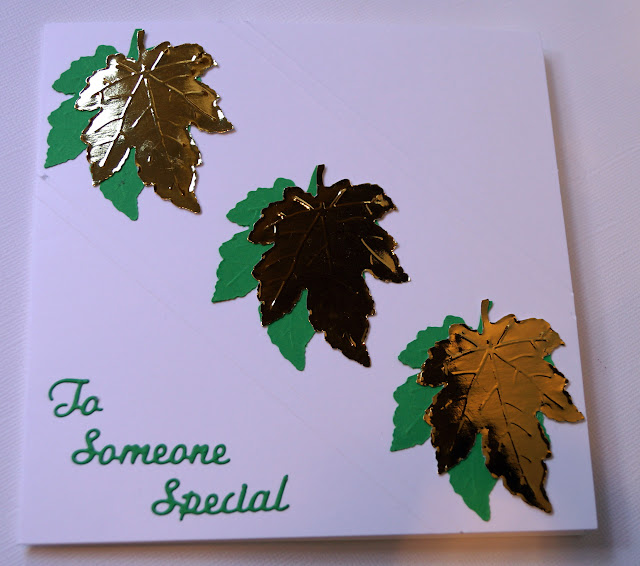 Beautiful and classy Jane and a great way to use the colour combo
Thanks so much for sharing and taking part.
Sarah xx
Less is More

I love this. really crafty! You did really well taking the photograph too with all that shine. Barbxx

Lovely card Jane. I agree with you about getting a good photo with mirri - I had the same problem with my card. Sue.x

This is SUCH a great use of snippets Jane . . . and perfect for this time of year too!
Thanks for coming to play in the Snippets Playground. I'll see you on the swings later!

What a great use of snippets Jane and the scored lines set off the leaves beautifully.

Beautiful card, Jane, great use of snippets. I could see the scored lines easily when I enlarged the photos. I used to be in the MAYC too, many years ago.... happy memories. xx

I'm back again...... I've just been TAGGED in the Snippets Playground by Bonnie. I didn't quite manage to run and hide before she caught me. I'm tagging you . . . you're IT! Go run after another player and tag them next! xx

Great use of your snippets and that punch looks so effective on the gold leaves.
Thanks for sharing with us.
Anita x
Less is More

Great use of your die-cuts!
The gold looks terrific!
Thanks so much
Chrissie
"Less is More"

Fab leaf punch Jane and a super card!
Thank you for joining our colour challenge
Anne
Less is More