The latest challenge at CD Sundays is Gorgeous Gowns. To me that always says "Debbie Moore" but I wanted to do something a bit different this time so I had a browse through Joanna Sheen's "Age of Elegance" CD where there are plenty of very gorgeous gowns. When I came to this lovely painting, Expectations by Lawrence Alma-Tadema, I thought it looked both gorgeous and elegant. But rather than expectant, I thought the lady looked as if she was tearing her hair out in frustration!

That led me to the idea of making a totally off-the-wall card using this sentiment from an NBUS Dylusions set (NBUS means Never Before Used Schtuff and Darnell at djkardkreations is currently running a challenge that urges us to get out our NBUS and USE it!)

To preserve the impact of the curious juxtaposition of the classical, elegant image and the slightly crazy sentiment, I kept the rest of the card as simple and elegant as possible, just layering with some subtly printed paper from my stash and using a smaller version of the image as a "stop" on the base. 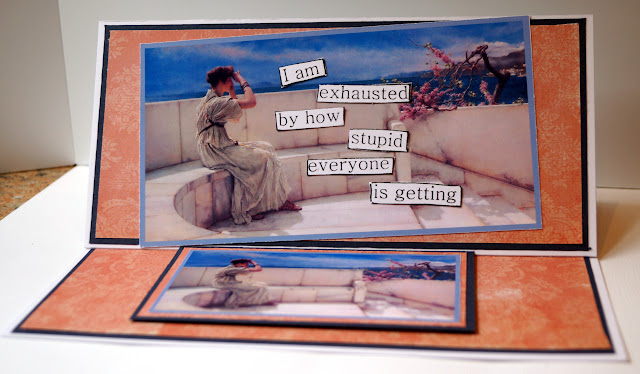 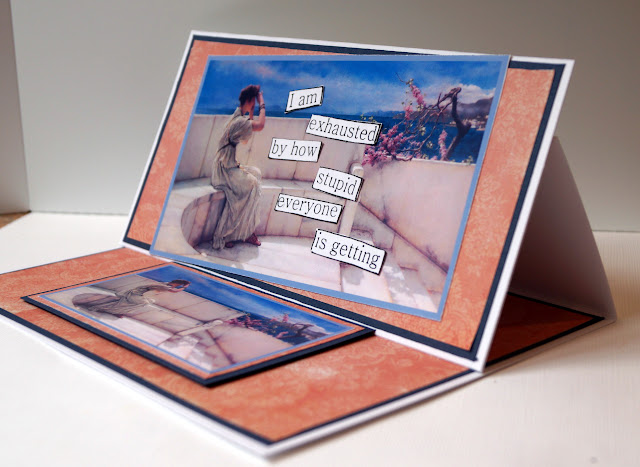 Now for the educational part. I realised when I was browsing the CD that I knew very little about Alma-Tadema and his work. Apparently he was born in the Netherlands, but in later life he and his wife became the last official British Denizens, before the denizenship ceased to exist (although apparently here in the UK it hasn't actually been abolished.) - the denizenship gave them certain rights normally only available to full citizens.

I have been searching through his works trying to find out where the beautiful setting for the painting is, and found that it, or somewhere very similar, features in many of his works. It appears to be a generic "Mediterranean" view. Apparently his work was heavily influenced by a visit to Pompeii, but then again what appears to be the same marble seat and wall appears in a painting supposedly set on Lesbos.  But wherever it is, painting representations of  marble was something he excelled at, as you can see from the picture.

Right, lesson over! I think I would send this card to somebody who was going through a tough time. They'd have to be a close friend, though!

Wow Jane this is certainly different. It's a beautiful scene. Thank for the interesting info too. You are very creative. Thank you for sharing it with us at CD Sunday. Wynn DT

Very clever card and the sentiment made me laugh. I found the explanation all very interesting too.
Jocelyn x
CD Sunday DT

The scene is beautiful! The sentiment is awesome!!! Thanks so much for joining in over at Darnell's using your NBUS. Good luck. Kylie - Happy Little Stampers xx

I love your take on this Jane and for the art lesson. Welcome back - you have been missed.
Carol xx
CD Sunday DT

Very interesting history on the artist - your card is so fun with that sentiment and the easel style!

Ha ha , that could apply to me today, lovely scene and layout and also a little history , but I'd like to be there now , beautiful.
Thanks for joining us at Cd Sunday
sue-b xx
CD Sunday DT

Great card made me laugh, but her dress is fabulous

A fabulous card Jane, great choice of image and I love your fun sentiment.
Pauline
x

Beautiful and educational! Thanks for sharing and joining in on the NBUS challenge. Hugs Bev (Uniko) x

I SO have to get that Dylusions set, Jane! This card is fabulous and so up my alley! Seeing her, so beautiful and so "proper" in that spectacular setting, I expected her to say something eloquent! It was a guffaw moment of surprise to read the words which, in my book, are utterly profound and true for our modern times!! I adore it cuz I feel prezackly the same way!! Thank you so much for playing in my NBUS Challenge #5!! Hugs, Darnell

really FUN card Jane
woooww this is a picture?
you are great on any design
I love this sentiment you put like this
stunning creation Jane
hugs, Monika

I love these paintings, but must admit I had never researched into them, so thanks for the info. Very clever sentiment on a fab card.
Lynn x