In the Snippets Playground

I'm very excited, because today Di is revealing the first ever guest designer in the Snippets Playground and she's given ME the honour of the role. Today is the "half term" post in the new two-weekly format, when the winners of the previous challenge are announced, and now the guest designer revealed, so I'm delighted to be the first of many. I believe Parsnip is sulking because he wasn't chosen - I'll have to look out in the playground later as I'm sure he'll be trying to play tricks on me.

Here is my card for you: 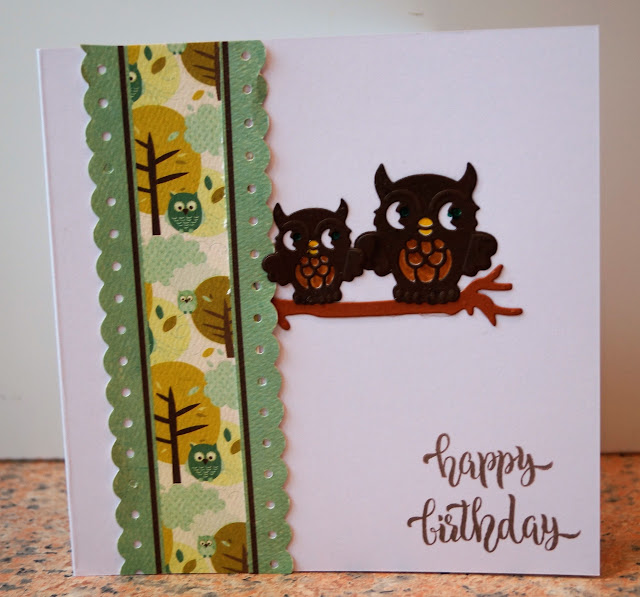 The dies I used are called Magnificent Christmas (but I left out the Santa hats), by Yvonne Creations.  The owls and branches are cut from snippets, of course, and the border is a scrap left from a sheet of 12 x 12 that has made numerous cards. It had a scallop border all the way round, so I cut a strip with border and background from one side and then added a strip from another edge of the sheet. Instead of backing the owls in another colour or piecing in the breasts and beaks, I coloured them in with fine markers. The sentiment is stamped using the very useful set that comes with the current issue of Making Cards magazine.

I hope to get round and visit lots of your entries - there is still plenty time to join in here and I must warn you that as long as I'm wearing my Visitor's Badge there is to be no running in the corridors! So why not have a rummage round among all your snippets, trimmings and offcuts and see just what you can create from them?
Posted by Jane Willis at 00:30

Well hello Jane! Parsnip is actually pretty cool about you being a 'Parsnip's Prefect' - he knows his limitations! :)

Thanks so much again for agreeing to be my first GD!

Such a cute "English Owl" card! :) How clever of you to add the other scalloped piece to that pretty border...which features yet another species of English Owl. lol... Using a marker to fill in the details on the little hoots was a great idea. Thank you for sharing your wonderful card over at the Playground!
<3 J

Morning Jane . . . Many congratulations on being the first GD In the Snippets Playground & the first of Parsnip's Prefects.

Terrific snippets card. If you're not having to be TOO goody goody, come see me round the back of the bike sheds & we'll celebrate your firsts with a little moonshine!!!!

How lovely to be chosen as the first GD over in the playground Jane. This is such a cute cards...sweet owls all around! Thanks for sharing it and have a lovley Sunday despite this dreary weather xx

Congratulations on being the first GD over at the playground Jane, and with a beautiful card too. I love those cute owls and the pretty paper and scalloped border. x

Congratulations Jane on being the first Guest Designer in the Playground. I love your cute owls. It's a very pretty card. Barbxx

Congrats on your GDT gig, super cute card great use of all your snippits.

Great snippets Card Jane and love the CAS layout, lovely pattern use down the side too, Jane well don DT post above and GD place in playground!!!
Thanks for sharing your inspiration!
Shaz in Oz.x

Beautiful snippets card Jane, super image and papers.
Congrats on being the first DT post in the playground.