This card happened by accident - I was rummaging around in my bag of ribbons for one of those elusive scraps that you just know are somewhere, when something fell on the floor and landed at my feet. It was this piece of ribbon, still in its packaging, and I'd forgotten all about it. Well, since it was begging to be used, it would have been rude not to, wouldn't it? 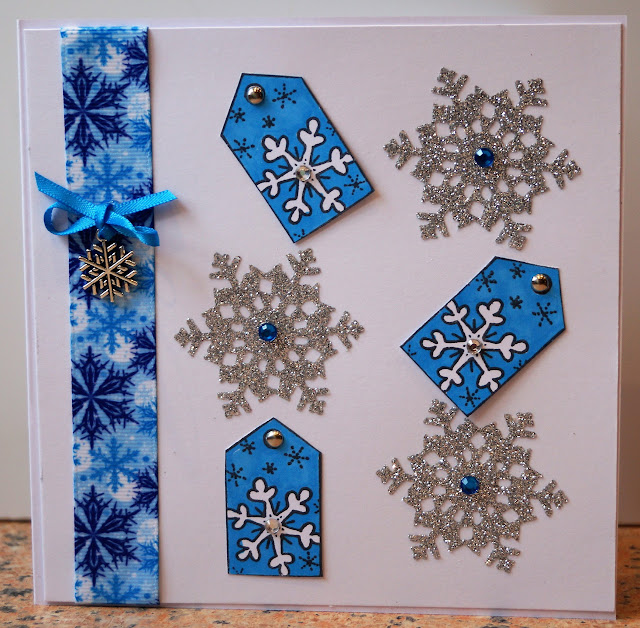 The sparkly silver snowflakes are cut from Cricut vinyl - I think it's meant for making iron on motifs for textiles, but I used it by die cutting in the Grand Calibur (it's quite tough and takes several passes)  then using my heat gun to apply it to the card. It comes out much thinner and flatter than a normal die cut, almost as if it's melted into the card, and yet has an amazing amount of sparkle, far more than I could ever capture in a photo! The stamped tags  are made with an NBUS Funstamps stamp.

Wow that ribbon is beautiful. I love the colours of your lovely sparkly card. Barbxx

what a great use of that AMAZING ribbon!!! definitely a bit of crafty serendipity there, it's PERFECT for this fun and fabulous card! thanks very much for joining our FLAKY fun at JINGLE BELLES! <3

Love the little tags,sparkly snowflakes and the ribbon is beautiful
Carol x

Look at you pulling out the snowflake charm ... total snowflake immersion ... so glad you got *flaky* with us at jingle belles.

Thanks for entering both of my CHNC challenges with your lovely crafting - hope to see you again soon. x

I know I'm a little late but thanks so much for playing in my "Let The Flakes Fall Where They May" challenge over at Jingle Belles! Your project is fabulous!
Hugs,
Leslie
Love To Scrap 2
Love To Scrap!

hi
stunning card love your design
thanks for playing with us at CHCC2
hugs Lisbeth
http://krealis.blogspot.be/
http://craftyhazelnutschristmaschallenge2.blogspot.be/