A bit of extreme CAS

Several years ago, I bought a Hot Off The Press Christmas kit that included lots of large metal embellishments that were designed to be held in place with brads. I've used most of them, but still had this silver coloured  "Joy" one left. Somehow none of the brads left in the kit looked right, consisting as they do mostly of brown squares, and the hole in it was too small for most of my other brads.

Until, that is, today when I realised that my Cropadile can punch through thin metal, so I could use it to enlarge the hole. That meant I could brighten up the word by adding a star shaped brad as the centre of the O. I placed it on a black die cut circle to show off the metal, and all it really needed then was layering onto gold and silver circles to complete the card. Very extreme CAS, I know, and yet anything else would have been Too Much.

By the way, as always, the gold and silver card look rubbish in the photos! I really have NOT mastered the art of photographing metallic card. In fact now I've uploaded it to the blog, the silver word looks gold too....... think I might try a second photo..... 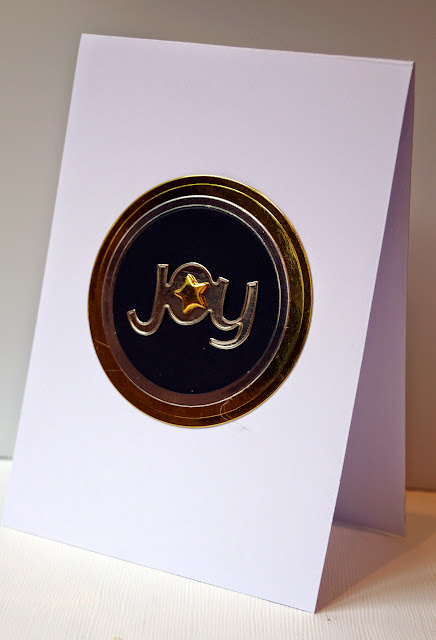 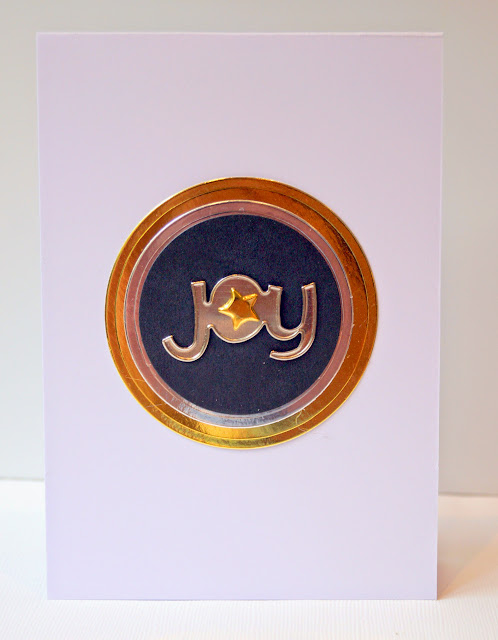 Ho-hum, now you can see the metallic card - but the black looks grey!

This looks terrific, the star looks completely at home in the centre!
Thanks so much
Chrissie
"Less is More"

Us crafters just hoard loads of stuff don't we Jane but I'm so glad you kept hold of this Christmas themed metal embellishment.
It's stunning and works perfectly for the challenge.
Thanks so much for sharing and taking part.
Sarah xx
Less is More

Oh, yes, aren't metallics such fun to photograph! NOT! But no matter how it presents itself, this CASlicious card is right up my alley and I LOVE it, Jane! Well done, you!! BTW, you mentioned a while back about having to identify sushi or some such on the captcha thingie. You know, I'm pretty sure you don't have to do that captcha thingie. Just type your comment and hit publish. That's what I was told and that's what I typed over the comment (I think), unless that all changed while I was out of town ...? Enjoy your day! Hugs, Darnell

LOVE this! So simple, but so fun!

what a beautiful and elegant CAS card! thanks for SHOPPING YOUR (silver & gold!) STASH with us this week!

So perfectly CAS. Love the star brad in the centre of your JOY. And yes, I agree, metallics are an absolute nightmare to photograph so you're not alone!
Thanks for sharing with us
Anita x
Less is More

Beautiful CAS design! Thanks so much for playing in our Silver and Gold Challenge at Shopping Our Stash!
Hugz,
Chana, DT

Jane this looks fab! So difficult to take a pic of, but can see it is amazing
Thanks so much for joining us
Anne
Less is More

Fantastic CAS card Jane!! Thanks so much for sharing and for playing along with the SHOPPING OUR STASH crew this week for our "Silver & Gold" challenge!!