Fougasse with almonds and fennel

Yesterday's Grand Prix was the Monaco one - usually my favourite race of the year. I didn't see it, as we were out at the Fleet Food Festival (there'll be a full report of this super day out on Mark's blog later this week) but last night's sports news was full of reports of team failures and temper tantrums so I'm sure I'd have been disappointed if I'd seen it.

Anyway, it means that F1 Foods at Caroline Makes is looking for recipes for Monegasque dishes. I did a bit of research on the topic, as I thought everybody in the Principality lived on champagne and caviar, but apparently they do have a few traditional dishes, one of which is a variation of Fougasse with almonds, aniseed and sometimes orange in it. I couldn't find a recipe, so I devised my own, using fennel seeds because I had no aniseed,   and omitting the orange because I wanted to use the finished bread for dunking in some of the rather gorgeous lemon and thyme infused rapeseed oil that we'd bought at the food festival. 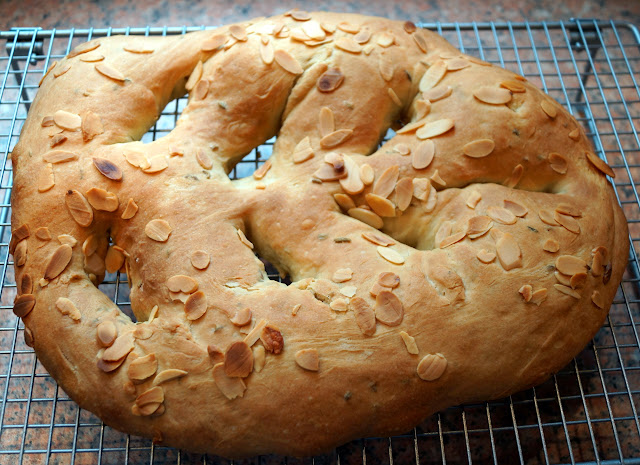 Incidentally one of the references I read suggested that the slits in the fougasse are supposed to represent an olive branch. If you squint hard enough, maybe you'll be able to see the resemblance!

Fougasse with almonds and fennel (makes one loaf)

Make your dough by either hand or machine, using the following ingredients:

When the dough has had its first rising, turn it onto a baking sheet lined with non-stick paper (it's too hard to move it once you've shaped it!) and press into an oval shape about 15cm x 25cm, then cut slits in the centre and diagonally either side. Using your floured hands, gently pull and stretch the dough to enlarge the holes and give the traditional Fougasse shape. My bread rose a lot and the holes closed up quite a bit during cooking - try to get them as big as possible to allow for this. It helps if you start at one end of the loaf and work towards the far end, always pulling the dough towards the un-stretched end.

Now brush the entire surface of the dough gently with olive oil and sprinkle with the flaked almonds, pressing them gently to try to encourage them to stick to the surface.

Cover the loaf with oiled clingfilm and set aside until puffy and risen, about 40 minutes. Heat the oven to 190C/170C fan/375F/gas mark 5.

Remove the clingfilm and bake the loaf for around 30 minutes until golden. If you want to use the traditional "tapping the bottom to see if it sounds hollow" test for doneness, lift it carefully rather than turning it over, as some of the almonds WILL fall off, however careful you've been. 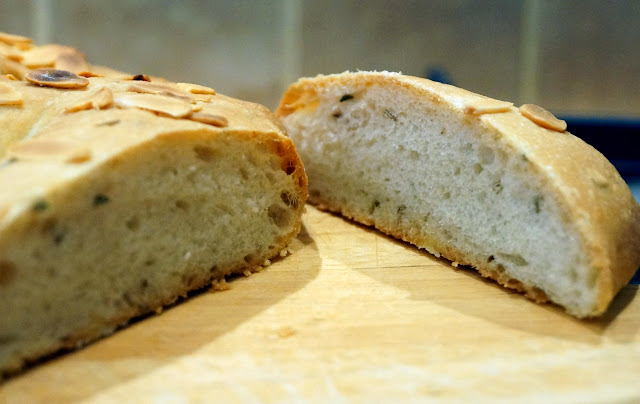 The bread was absolutely delicious - in fact as well as dipping in the oil, we both grabbed an extra chunk to mop up the last of the sauce on our pasta main courses. The fragrant fennel seed and toasty almonds were a gorgeous combination.  Definitely one I'll make again!

As well as F1 Foods

I am also sharing this with Bready, Steady, Go - bread with bits in it at Utterly Scrummy Food For Friends and Jen's Food.

That looks spectacular. Adore fennel. This is the bread for me x

Thank you so much for taking part in the Formula 1 Foods challenge again and going to so much effort! I'm impressed you devised your own recipe, this looks great.