From about 1975 to 1990, whenever I cut a recipe out of a magazine for future use, I stuck it into one of those peel-back-the-plastic photo albums that used to be popular. I have around a dozen albums full of recipes, many of which I've never tried. This recipe looks as if it came from Family Circle or Living magazine. 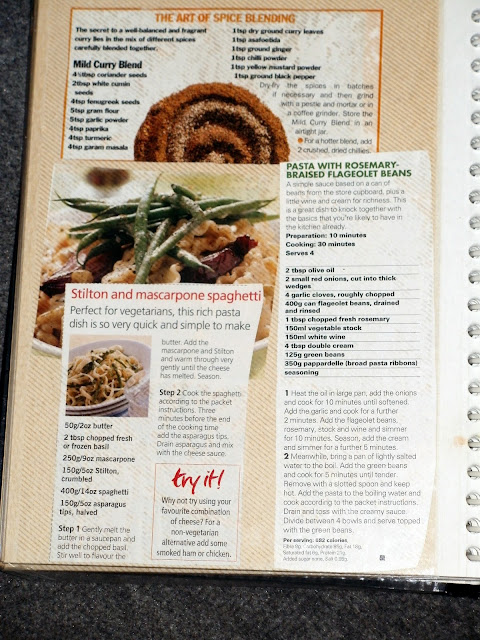 It's a very simple recipe, and I think it's come out clear enough to read, but I simplified it even more by chopping the green beans and cooking them in with the pasta. I also halved the recipe as there were just two of us,  and instead of papardelle used a wholewheat wibbly shape (sorry, I've thrown the bag away and can't remember the official name, but I always call it Wibbly Pasta.) 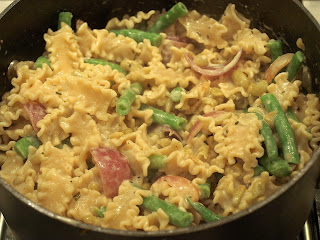 The result was quick, easy and delicious and I'm really regretting having spent so many years NOT making it - it's the kind of quick supper that's easy to knock out without having a recipe in front of you, once you've tried the flavour combination once.

I'm going to add this to the linky at Bookmarked Recipes on Tinned Tomatoes, and because it is incredibly cheap to make, especially when the garden's full of beans, to Credit Crunch Munch at Elizabeth's Kitchen, Fab Food 4 All and Fuss Free Flavours.

How delicious! And a perfect use of home grown food!
Thanks for sending to Credit Crunch Munch!

Mmm, this sounds delicious and makes me wish that I could still grow Rosemary in the garden but alas we have some pest from Wisley gardens that has put a stop to it. Thank you for entering Credit Crunch Munch:-)

Wibbly pasta - I love it! Those magazine clippings are often a wealth of inspiration. Thank you for sharing your recipe with CCM!