This doesn't mean your work has to necessarily have a Scottish theme, or indeed to include a kilt, just that there needs to be some PLAID somewhere on it.

However, I have gone for Scottish and a kilt on my offering: 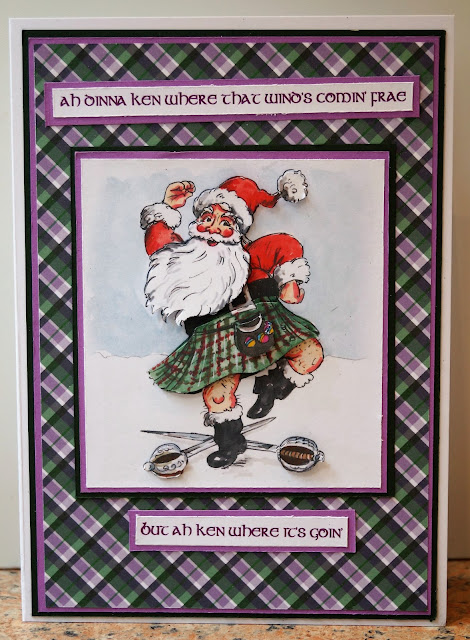 The image is a lightly-decoupaged one from the La Pashe CD "The Best of La Pashe 2012" while the background was printed out from the 2014 edition in the same series.
I wrote the sentiment out using the font "Stonecross" (note to anyone who tries to use this font, which is available on many free font sites - it has no lower case characters so you need to write all in upper case or you are left with blank spaces where the letters should be) to give it an authentic Scottish look.
For anyone who can't read it, or doesn't understand the Scots dialect, click on the row below  and highlight everything between the two asterisks and while it is highlighted, you will see it in clear text!
*  I don't know where that wind's coming from but I know where it's going  *
It refers, of course, to the tradition of a Scotsman not wearing anything under his kilt! And for that reason, I did consider using an alternative font - our old friend Comic Sans, since "Sans" is the French word for "Without"!
I think this would make a great New Year card - after all, Santa must be in a party mood after he's got all that present-delivering out of the way.
Posted by Jane Willis at 11:30

He he he this is great sistah!
Santa in a wee kilt...loves it!

Brilliant card, love your sentiment and the font is perfect x

OMG That card is freakin' hilarious.

Just FABULOUS!!! Love that Santa!!! great use of the font too.

Wonderful card, I love that image and the sentiment is great. Gorgeous paper too :)
Hugs Kaz xx

Very festive and it gave me quite the giggle. Love it! xxD

Thank you for not using Comic Sans. ;) Thank you also for the delightfully snarky Santa card!

I think Santa looks good in a kilt. Great card