This month marks the 40th edition of Random Recipes, and to mark the occasion Dom asked us to pick the 40th book on our shelves and open it at page 40, then cook the recipe we found there. 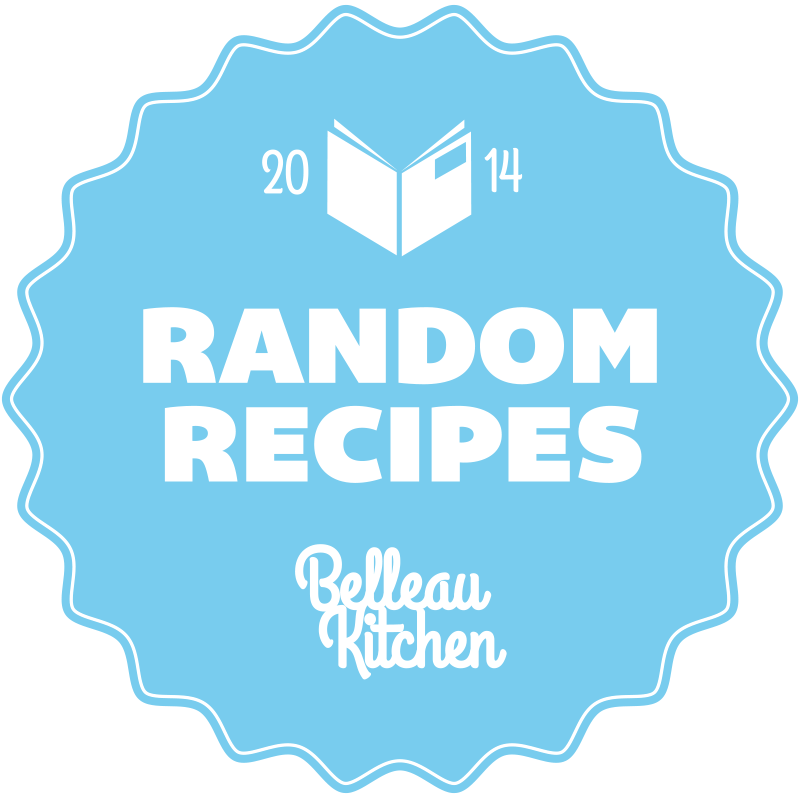 The 40th book on my shelf was an old favourite, River Cottage Every Day, and the recipe on page 40 is Wholemeal Drop Scones 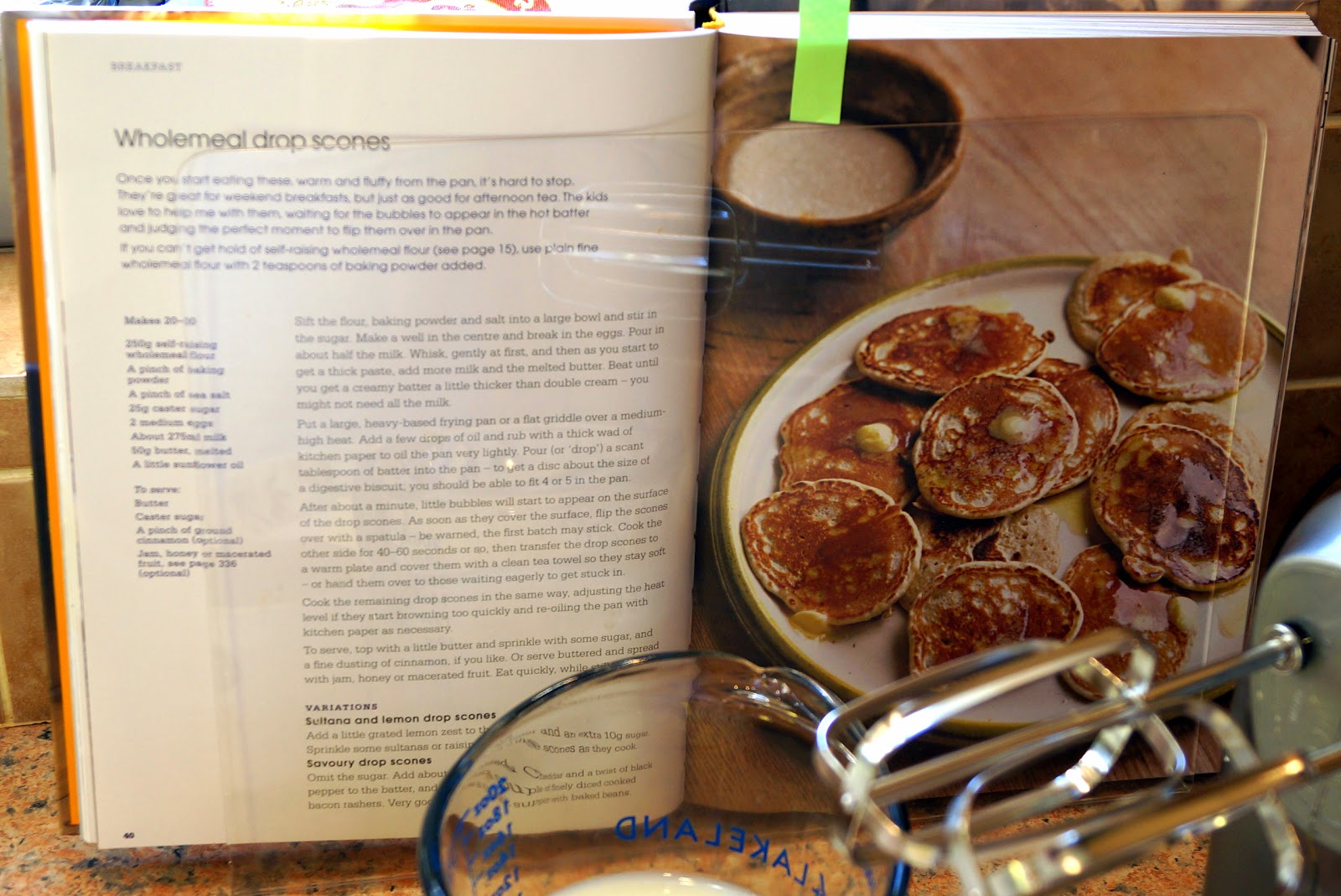 Now being diabetic, I looked to see if there was a savoury variant and sure enough there was: 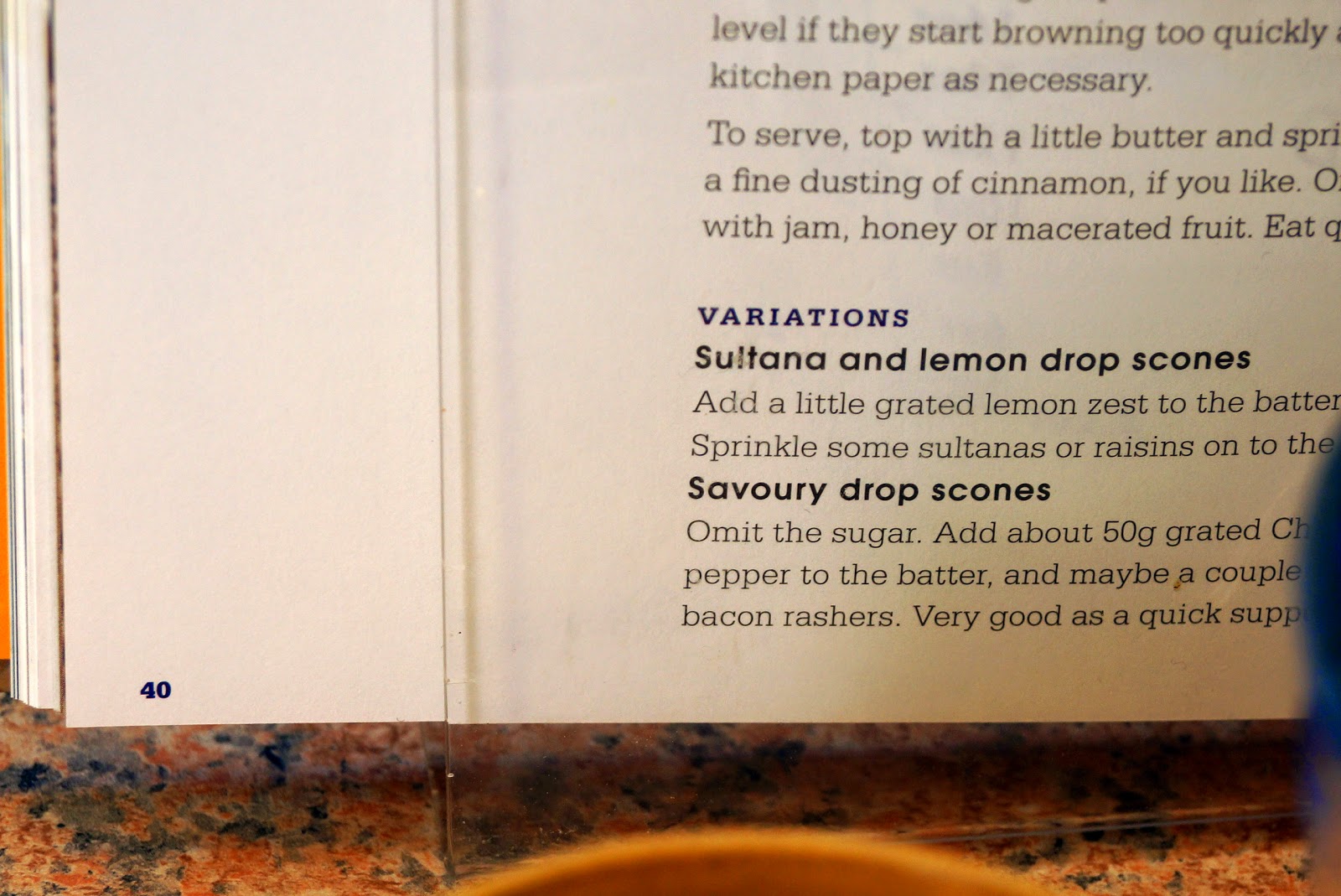 The C stands for Cheddar, which sounded good. I decided not to add the optional bacon as I was planning to serve them with black pudding and I didn't want us to get over-porked.

I've made drop scones many times before, but never with wholemeal flour and always from the recipe in my dog-eared old Be-Ro recipe book. 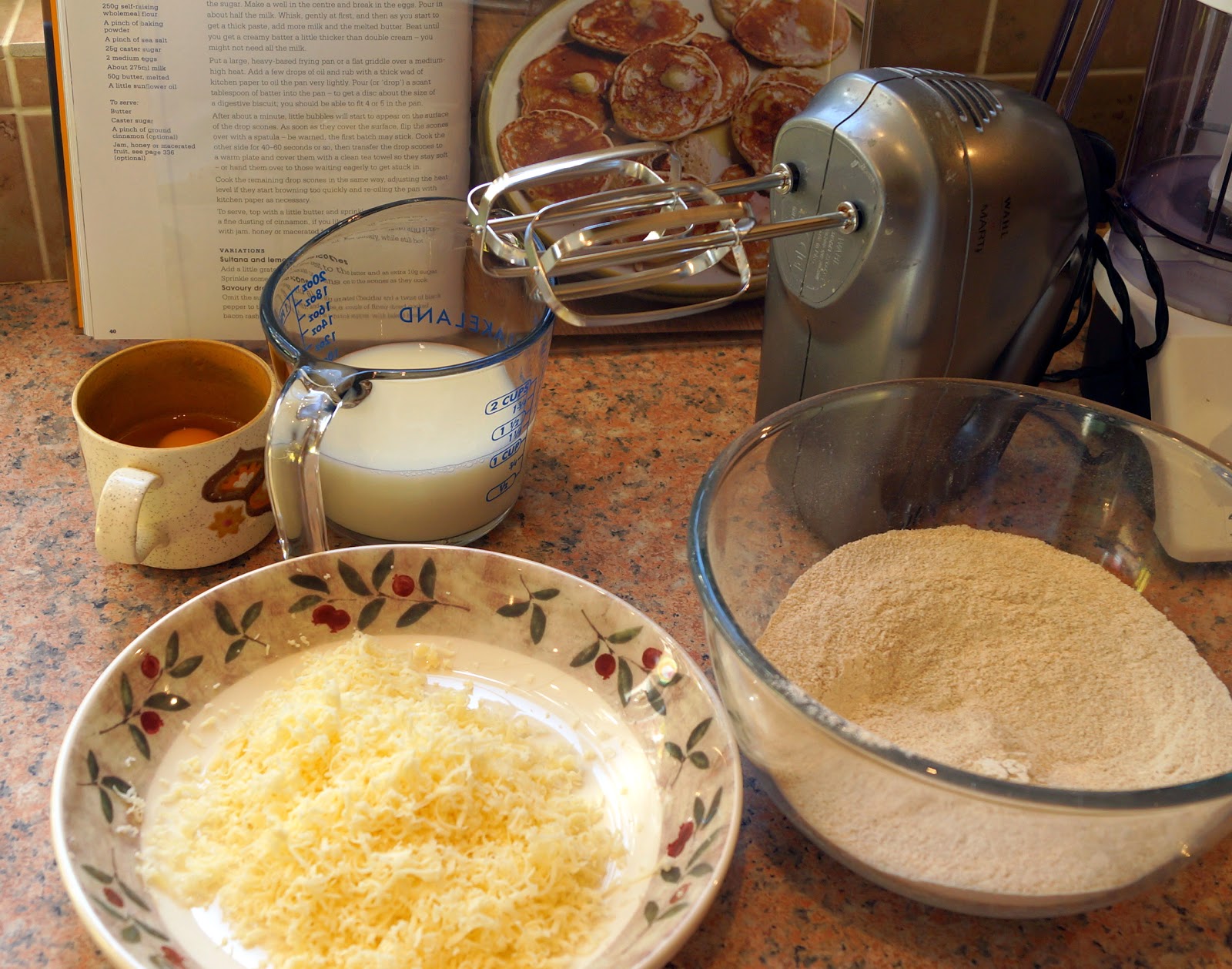 Once the batter was mixed, it looked...... wrong. Too thick, too gluey. I don't know whether it was the fact that the flour was wholemeal, or that there was cheese in the batter, but it certainly wasn't right. I added a little more milk - but not too much. Partly because Dom is very strict with us (ooo-er!)  about changing the recipe. but mainly, I have to confess, because we  were rather short of milk following a milk related incident earlier in the day. (But don't worry, the car boot is cleaned, disinfected and deodorised now).

Anyway, wrong or not, we needed to eat so I glopped some into the pan. 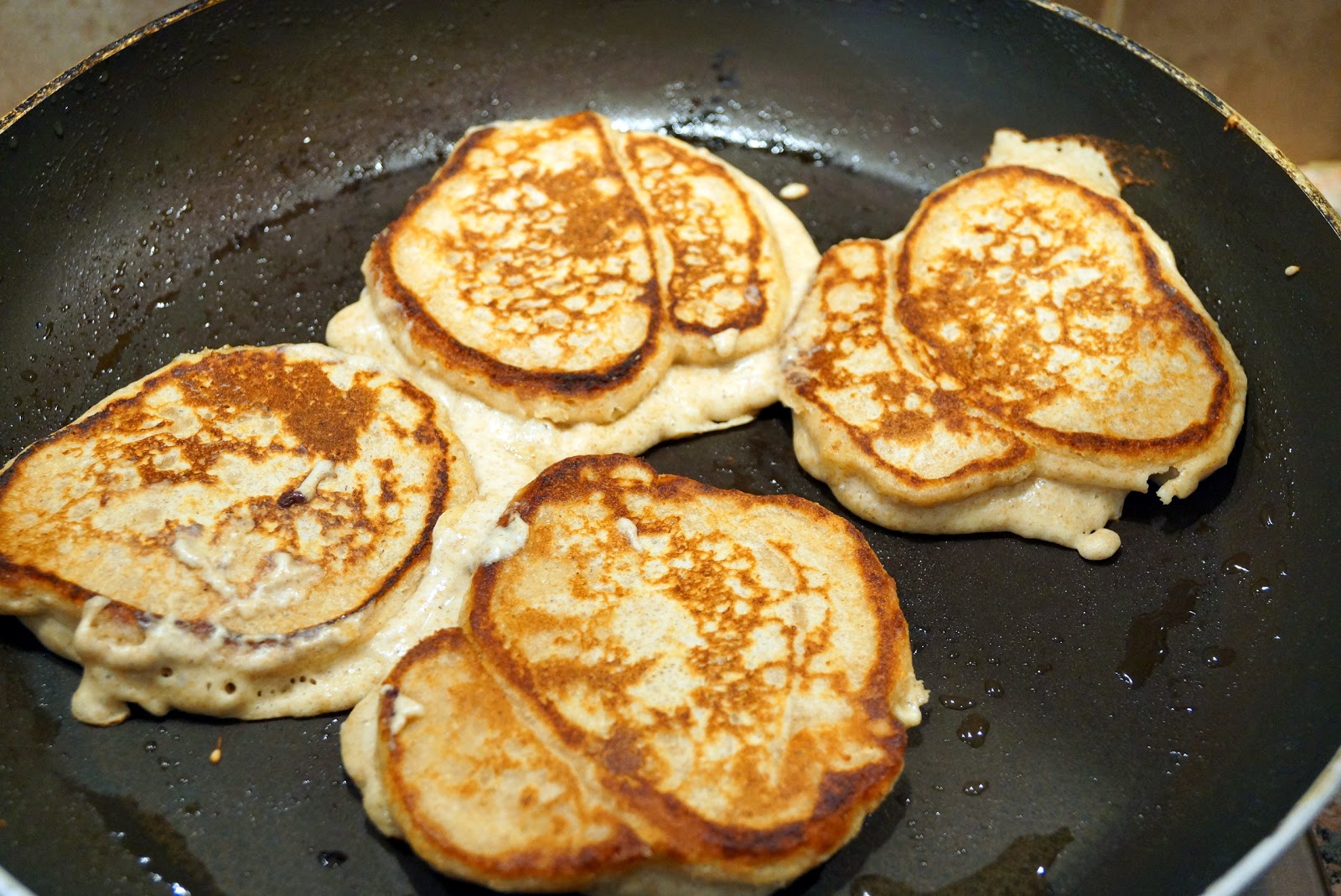 Pretty, isn't it? (Don't feel obliged to answer that). I did manage to get a few that were drop scone shaped. They may look a bit well done to you but we both like well done bakery products; we're the irritating couple at the front of the bread stall queue who hold everybody up while we get the stallholder to go through every single loaf looking for the one with most black bits on the crust. 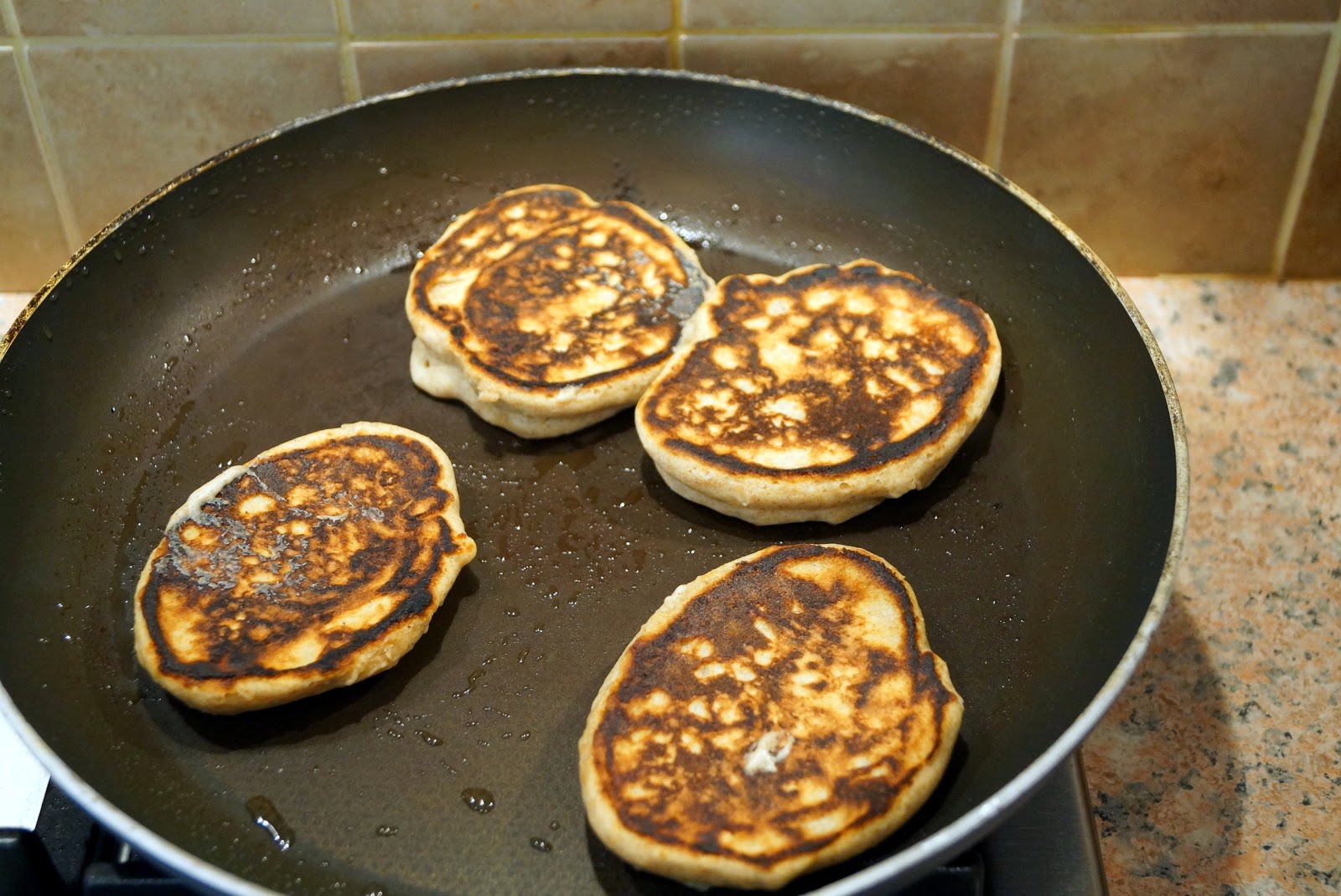 We ate the scones with black pudding and green beans braised with mushrooms and thyme. It really called out for a nice big dollop of home made tomato ketchup but as we'd run out, a couple of fresh tomatoes had to do instead. 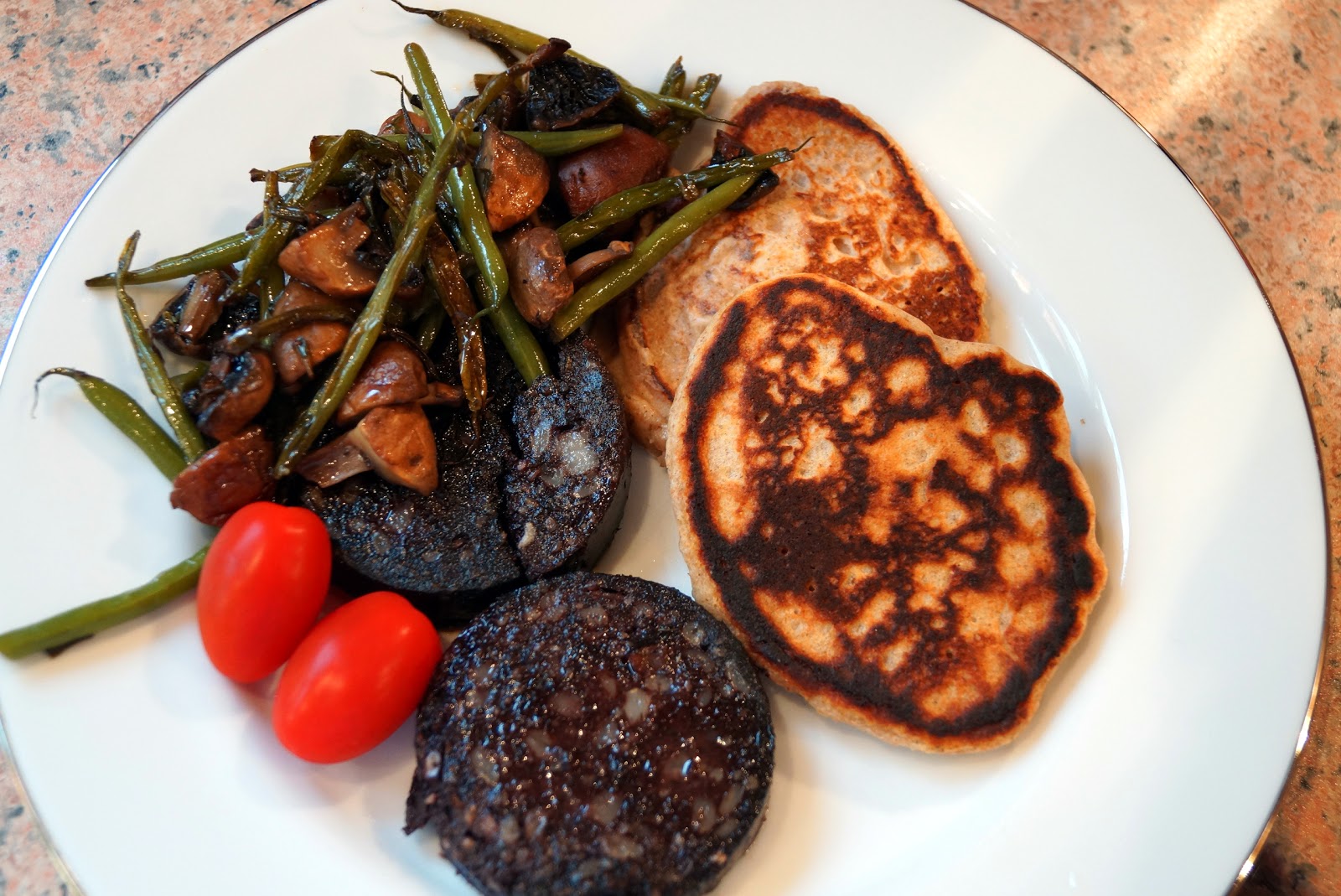 So there you are, the Curse of Random Recipes strikes again! After a couple of recent successful months, I'm sure you'd all been thinking it had left me, so it will come as a huge relief to you that it's back with a vengeance. Even the birds were reluctant to eat the leftovers, of which there were far too many!
Posted by Jane Willis at 12:19

Sorry it didn't work out, love the green beans idea though :)

oh my god I feel SOOOO guilty now, although to be honest I would expect nothing less from you than a fail. I think the last two were simply a fluke!... I think the idea of them is great and they look OK... anyway, thanks so much for taking part... I think...

I had a similar disaster with pupusas (renamed poopoosas !) last week and there too, I instantly knew it looked wrong. Don't these people test their recipes ?!

Oh dearie me, they don't sound good, do they? Maybe I should retrieve my Cooking Disaster linky? Such a pity the recipe didn't work, as all the other flavours would worked lovely with drop scones