The Power of Three #2 - Family Food

I wasn't  sure whether to post today (apart from a scheduled DT post of course) as I was feeling so upset by the events in Manchester. But then, if you change things in any way, the terrorists have won, haven't they, so, shoulders squared, I'm posting anyway. I hope none of my blogging friends and their families were involved. I know that some of my non-blogging friends and their children were, but thankfully they are all safe but very shaken.

Last week I decided to get together all the recipe books that I've never used and cook three recipes from them, one  book at a time, then decide whether they should stay or go. Unfortunately this time I've only cooked one recipe from this book for a couple of reasons which will become clear if you read on. 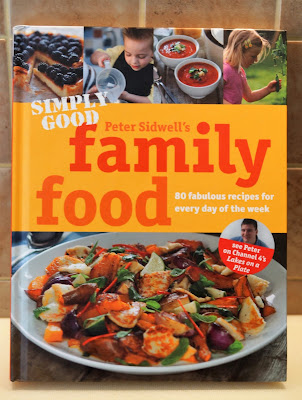 Today's book is Peter Sidwell's Simply Good Family Food, and I found it incredibly difficult to choose three recipes to cook. For the most part that is because the book simply isn't aimed at experienced cooks like me, it's targeted at parents of young families who may, before the children came along, have lived off ready meals and takeaways and have now decided the time has come to eat "real" food.
This means that many of the dishes in it are familiar ones that I would cook without a recipe - toad in the hole, venison casserole, mussels in beer, melon and mint salad, pumpkin soup, carrot salad....  And also, being aimed at families and with the idea of baking with the kids,  there are lots of cake and biscuit recipes that aren't of much interest to me as a diabetic.
That meant I had a real struggle to find three recipes that I wanted to try, but today I had three bookmarks in place and decided to try the first of them, the only one that really attracted me, Savoury Walnut Shortbread which is on page 103 of the book. 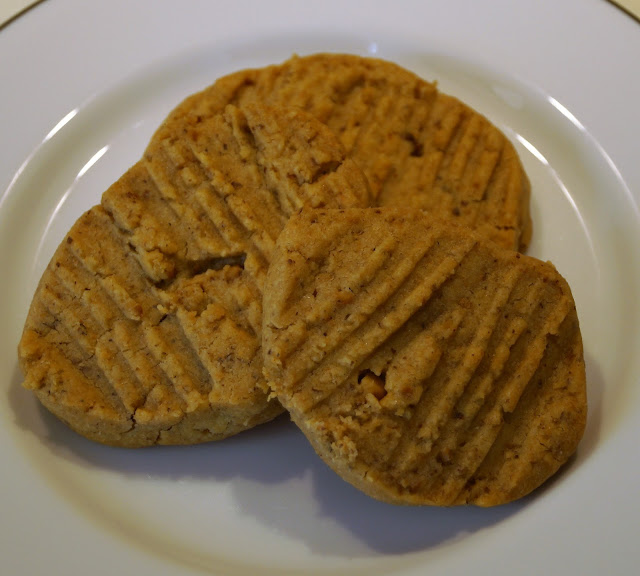 I found the carefully weighed ingredients which included butter, flour, grated parmesan cheese and toasted walnuts, gave me a dough that was far too soft and sticky to handle, so had to add a fair bit of extra flour. The illustration in the book shows quite thin biscuits, yet the instructions said to cut slices 1-2 cm thick ..... 2 cm? That's almost an INCH! These biscuits are meant for serving with cheese -  just imagine trying to get your choppers round a biscuit an inch thick with a chunk of Cheddar on top of it! So I cut them to 1cm, and they still looked too thick to eat with cheese, so I used the prongs of a fork to flatten them and add texture to the surface.
The recipe said to cook for 12 minutes at Gas mark 3, 160C, 325 F - that's a pretty low temperature for baking, and by the end of it even my much-thinner-than-suggested biscuits were nowhere near cooked. In the end it took around 40 minutes to cook them. 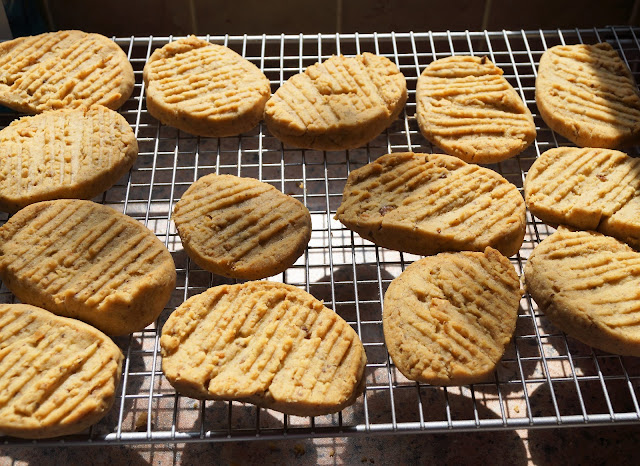 They look pretty golden and appetising now, don't they? They are delicious too, with a lovely light, crumbly texture, although despite having lots of toasted walnuts in them there's no walnut flavour at all!

So my overall opinion of the biscuits is "Nice biscuits, shame about the instructions". That means that I really don't fancy trying any of the other recipes in the book so in this case I'm stopping at one and popping the book on the charity shop pile in the hope it will find a home where it is more suited to the occupants!
Posted by Jane Willis at 16:42

You do wonder if they actually check these recipes don't you! Glad you managed to adapt it to work well. Like you my thoughts are with Manchester, glad that all your loved ones are safe. Cara x

I think you should write your own recipe book - you'd do a better job. I hate it when you follow the instructions to the letter and it doesn't work. Like you, I'm confident enough to rectify most issues, adding extra flour or liquid, but for beginner cooks, they'd blame themselves and lose confidence. I felt that I shouldn't be blogging about flippant stuff at the moment too, but as you say, life must and should go on ... totally heartbreaking though :(