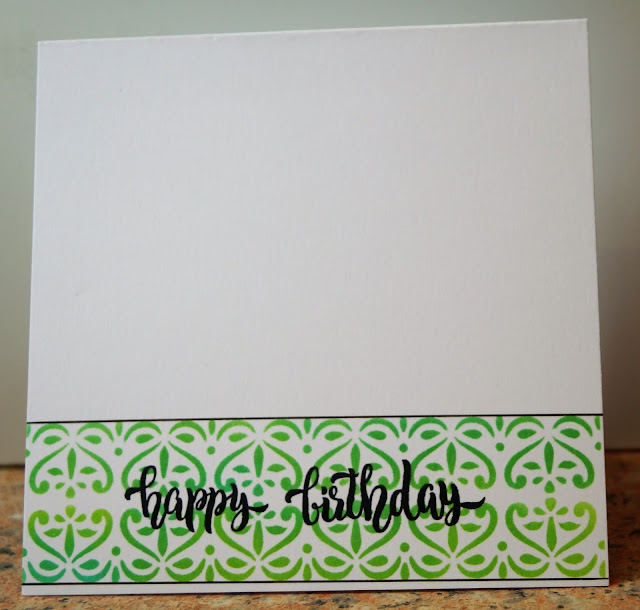 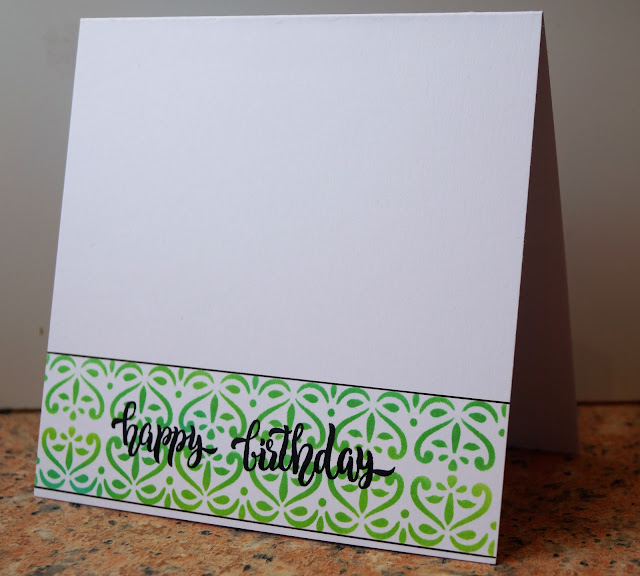 For this card I used a border stencil and inks from the lighter end of a Kaleidacolor Fresh Greens pad, then inverted the stencil to match up with the original one and stencilled again to create a wide border. The border is actually exactly 5cm wide, one third of the 15 cm card, although it looks smaller. I think it's because of the optical illusion that makes white space look larger, something we often subconsciously take advantage of when we are making CAS cards.

I've added a second optical illusion by using a fine liner to edge the border, giving it a slightly three dimensional look even though it is all one layer.

Finally I stamped the sentiment over the stencilled background, stamping several times to make it really stand out. 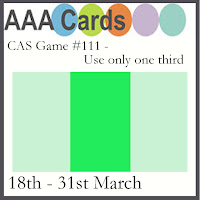 And it looks fab, fresh and springlike ... unlike the blimmin' weather!

This is gorgeous, Jane! It really does look like two layers :) Thanks for sharing at AAA Cards challenges.

Super stencil and I love that vibrant green. Brilliant use of one third, love your card. Thanks for playing along with AAA Cards.

What an eye-catching card! Beautifully CAS and a great interpretation of the challenge theme! Thanks for playing along with us at AAA Cards!

Beautiful card Jane. Your stencilling is super-crisp and the slightly ombre look to the ink colours is so lovely. A fab design for a one layered stencil card. Thank you so much for sharing this with us at Less is More xx

Lovely stencilling on this wonderfully CAS design OLC, Jane. The green colour is beautiful. Thank you so much for joining us at Less is More OLC Stencils. x

Beautiful ombré stenciled pattern. Love the hint of yellow with the green, Jane. Thank you for sharing with us at AAA Cards. =) Tracie