We are Siamese if you please

Our very first pets when we got married were two Siamese cats - actually they were just on loan to us for 6 months while the owners were overseas, but that was perfect for us as we were due to move after 6 months too. So when the lovely set of Siamese cat stamps appeared on a recent issue of Making Cards, I just had to have them! 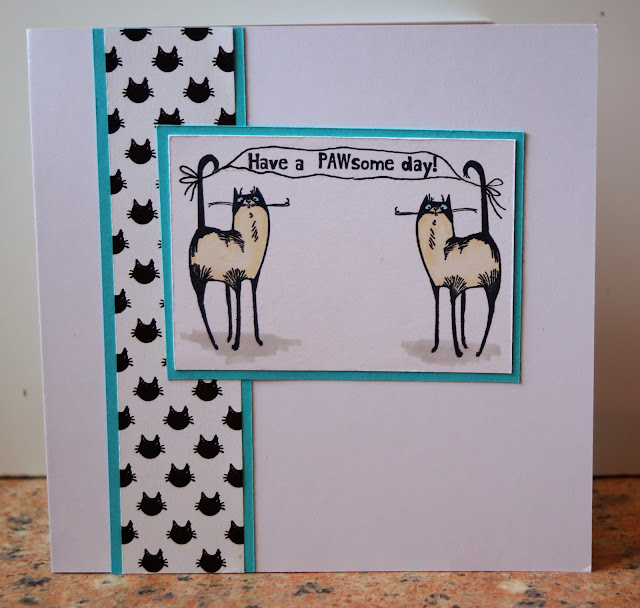 The paper is also from the magazine. I used the two mirror-image cats then stamped the sentiment between them and hand-drew the banner.
And do you know, it's only just dawned on me that the banner would be LOWER than the point where it was tied to the cats' tails, not higher as I have made it. Never mind, there are actually invisible helium balloons holding it up....

The theme at Less is More is Pets, so I'm playing along

Oh this is super, what a great card, Love siamese kittys, they are lovely, Hazelxx

A super card Jane, it certainly is a coincidence that we both decided to play with the same collection!
Pauline - Crafting with Cotnob
x

Great fun! You should send in a picture to the mag. I also bagged these cuties, but have such a backlog of stuff to make that I've not inked them up as yet, Jo x

Great stamps! I love your color palette, the aqua card looks amazing paired with the elegant black and white. Fun sentiment and layout too, love all the white space! Thanks for joining us at Less Is More!

Love this card. I have not played with my set yet.

Love the CATitude of your pet make, Jane