As you probably know, I used to live in Hong Kong about 30 years ago. Not in the bustling city which is what everyone thinks of when the name is mentioned, but in the army village of Sek Kong, out in what was then the countryside of the New Territories. Our flat was on the slopes of the hill Tai Mo Shan, looking out over the plain towards China, and our nearest town was the bustling market town of Yuen Long.

I loved shopping in Yuen Long - there were two busy markets and lots of tiny shops selling china, fabric, kitchen ware, stationery and fashion, as well as a small Western style supermarket and a huge China Products Emporium. One of my favourite shops of all was the peanut oil shop. They had a huge tank of peanuts roasting in the shop, and the nuts were crushed between rollers into a glass tank displayed in the window, so you could see the warm, fresh oil running down the glass. And you could smell it for several streets - that wonderful, warm, toasting smell that meant it was  practically impossible to pass anywhere near the shop without going in to buy a bottle. It has so much more flavour than the refined oil extracted from peanuts that we buy here with the label "groundnut oil"  and I still choose it when possible when I'm cooking Chinese style food, even though I now have to pick it up on my trips to the Chinese cash-and-carry.

There were huge, gaudily decorated restaurants where the ambiance changed according to the floor you visited. On the ground floor, there was no English translation on the menu and the clatter of Mah Jongg tiles was even louder than the clinking of tea cups and hubbub of conversation. The middle floor would be devoted to Dim Sum, with black-suited waitresses pushing round trolleys  laden with steaming baskets of goodies, each lady wearing a "chop" (stamp) round her neck to stamp the card on your table when you took a dish from her trolley - your bill at the end was calculated by the chop marks. The top floor was the "posh" area, with starched tablecloths and a menu that included English translations and lots of familiar (to us Europeans) dishes.

As well as the huge restaurants, there was a vast complex of licensed food stalls and almost every place where the pavement was wide enough was crammed with unlicensed hawker stalls which mysteriously vanished as soon as a policeman came into view. They sold delights such as satay, chestnuts, steamed cobs of corn, red cooked goose intestines, chunks of fresh coconut toped with a wafer thin slice of pickled ginger, sugar cane and hot waffles.

Filling the gap between grand restaurants and  street food were many smaller establishments, such as the Indonesian restaurant run by Nancy, a lovely American-Chinese lady who employed only Indonesian cooks and taught me most of what I know about  Indonesian food. Another was a tiny, heavily air-conditioned place that appeared not to even have a name, that sold mainly Chinese food but proudly displayed a selection of "English dishes"  on the menu. There was pork in sweetcorn and egg sauce,  beef in black bean sauce, rice topped with steamed minced beef and eggs, and, to complete the irony, "Beef Steak Chinese Style". It wasn't a true Chinese dish, but nobody would ever recognise it as an English one either. Over the years, I've developed my own version of the dish, but every time we eat it, I think nostalgically of my shopping trips to Yuen Long and wonder how much it's changed in the decades since I last visited. 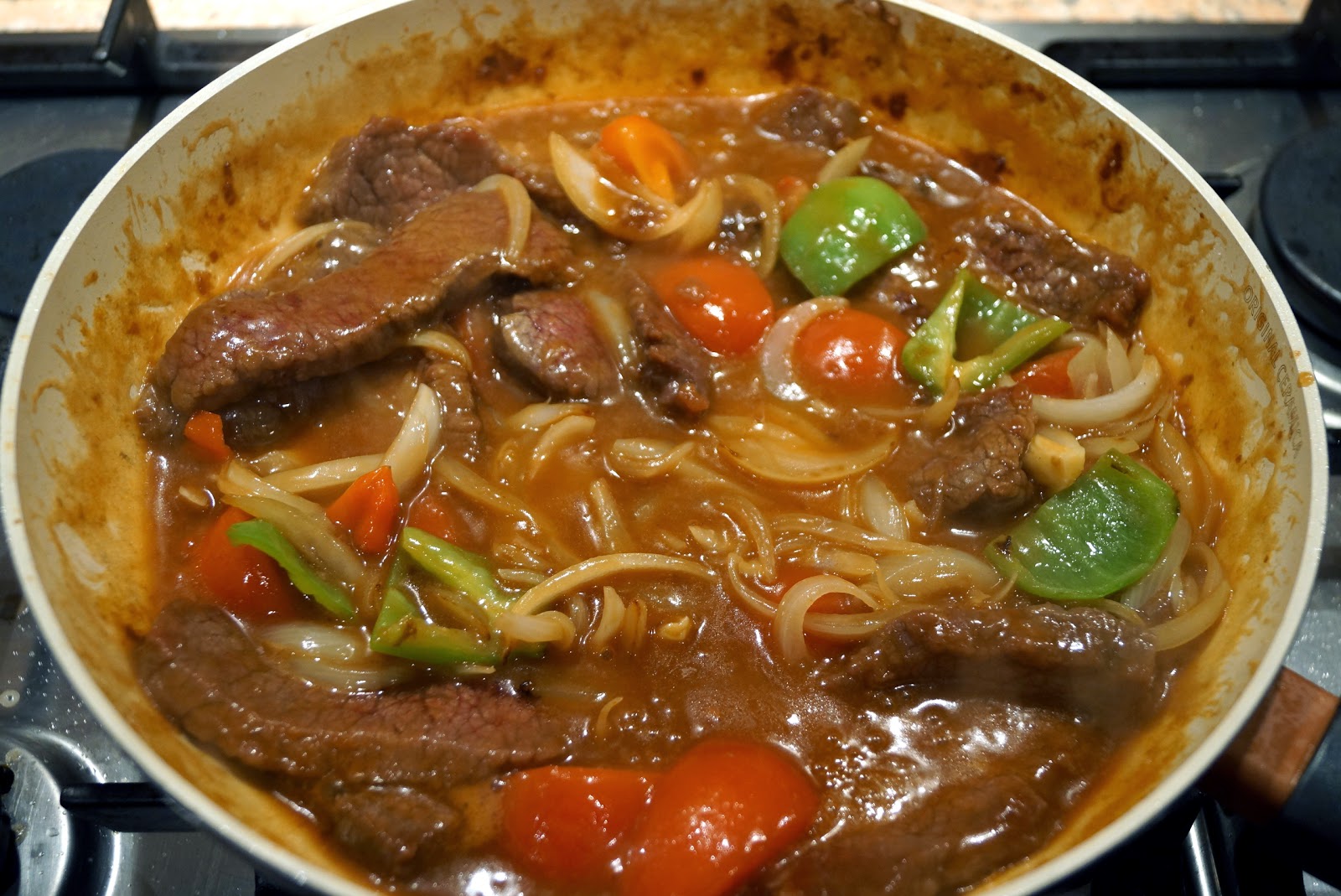 (note - I have included meat tenderiser in the ingredients. I buy it from the Chinese supermarket but you can occasionally find it in supermarkets. It is made from papain which is an enzyme found in the skin of papayas and pineapples. You can omit it, but the meat will need to marinate for longer, ideally several hours)

This will serve 4 as part of a Chinese meal with a couple of other dishes, or 2 if served as a complete main dish.

Mix together the marinade ingredients. Slice the beef into pieces about 2cm x 5cm and about 5mm thick, and coat in the marinade, rubbing it in well with your hands so that the meat absorbs some of it. Leave to stand for at least 30 minutes, stirring occasionally.

Heat 1 tbs of the oil in a wok or large frying pan and stir fry the onions, peppers and chilli for about 2 minutes until very lightly cooled. Remove from the pan with a slotted spoon and set aside.

Add the remaining oil to the pan and reheat. Lift the meat from the marinade with a slotted spoon and stir fry for around 5 minutes until cooked through. Return the onion mixture to the pan and mix well, then add all the sauce ingredients except the cornflour. Bring to the boil and stir in the tomato wedges. Cook for 1 minute until they are heated through, then stir in the cornflour and bring back to the boil, stirring so that it thickens evenly. 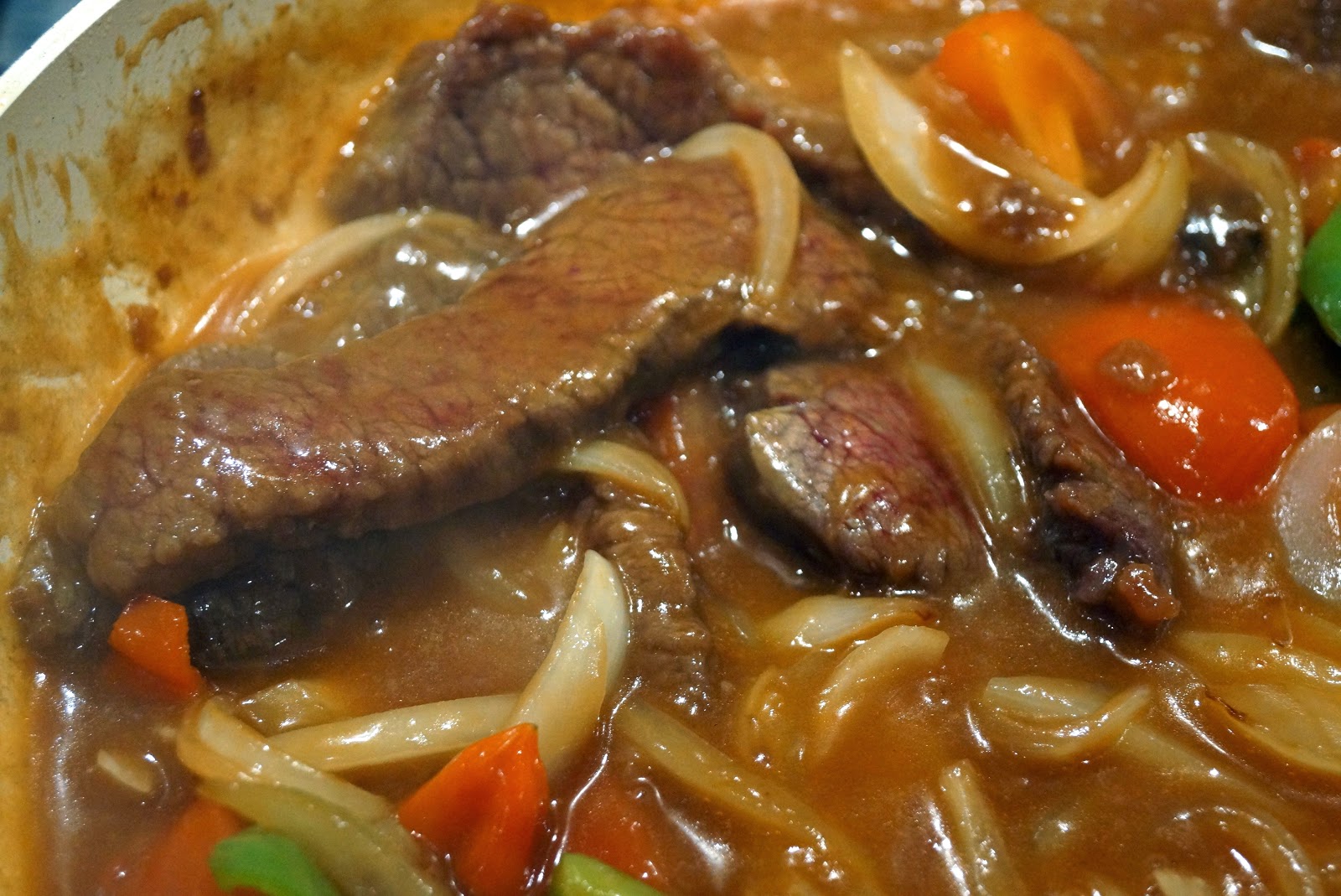